For the last few decades, the search for extraterrestrial intelligence has focused on detecting radio signals. But a new collaboration between Breakthrough Listen and VERITAS will focus on looking for laser-like flashes of light. 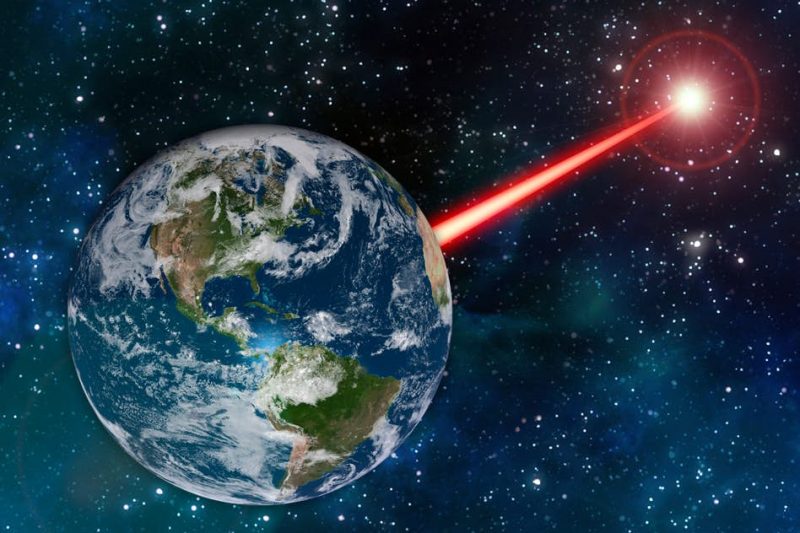 VERITAS will be used to help search for laser-like optical light pulses that could be beacons from an advanced alien civilization. Image via MIT/New Atlas.

The Search for Extraterrestrial Intelligence (SETI) has traditionally looked for radio signals of artificial origin, i.e. coming from an alien civilization at least as advanced as our own. We humans have been broadcasting radio waves into space for about 100 years now, since Marconi pioneered long-distance radio transmission. The reasoning has been that other civilizations might use radio, too. While that approach continues to be highly debated, there is another kind of search that is starting to be considered more seriously now as well: looking for optical signals – brief flashes of light like pulsing lasers – that could be used as beacons to communicate over interstellar distances.

On July 17, 2019, Breakthrough Initiatives – founded in 2015 by entrepreneur Yuri Milner – announced a new partnership with the VERITAS Collaboration to focus on this strategy. VERITAS (the Very Energetic Radiation Imaging Telescope Array System) will search for such pulsed optical beacons, as well as radio signals, with its array of four 12-meter telescopes at the Whipple Observatory in Amado, Arizona.

Breakthrough Listen, part of Breakthrough Initiatives, has already been conducting searches using its still-ongoing radio frequency survey and spectroscopic optical laser survey. But VERITAS can take the search to a new level. It was built to detect cosmic gamma rays and is the most powerful telescope array in the world for studying high energy astrophysics. As it turns out, it can also be used to look for “pulsed optical beacons” – laser-like pulses of light – that are very short in duration, only a few nanoseconds (one nanosecond is a billionth of a second). 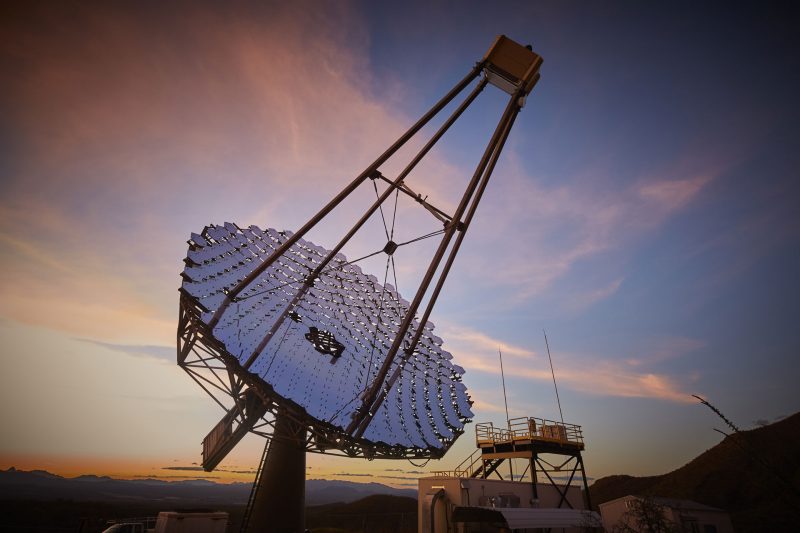 Closer view of one of the 4 telescopes in the VERITAS array. Image via CfA/SciTechDaily.

An advantage of this method is that any artificial pulses could outshine stars that happen to lie in the same direction. The use of all four telescopes would also help to eliminate false positives from any detections made. VERITAS will provide a unique way of expanding the search for alien intelligence beyond previous methods, as noted by Yuri Milner:

When it comes to intelligent life beyond Earth, we don’t know where it exists or how it communicates. So our philosophy is to look in as many places, and in as many ways, as we can. VERITAS expands our range of observation even further.

Breakthrough Listen is already the most powerful, comprehensive, and intensive search yet undertaken for signs of intelligent life beyond Earth. Now, with the addition of VERITAS, we’re sensitive to an important new class of signals: fast optical pulses. Optical communication has already been used by NASA to transmit high definition images to Earth from the moon, so there’s reason to believe that an advanced civilization might use a scaled-up version of this technology for interstellar communication.

VERITAS will be able to detect very faint light signals, if any exist, according to Jamie Holder at the University of Delaware:

Using the huge mirror area of the four VERITAS telescopes will allow us to search for these extremely faint optical flashes in the night sky, which could correspond to signals from an extraterrestrial civilization.

Aerial view of the VERITAS telescope array and the Fred Lawrence Whipple Observatory basecamp in Amado, Arizona. Image via VERITAS.

Just how sensitive is VERITAS? The most powerful lasers on Earth can transmit a pulse of 500 terawatts lasting only a few nanoseconds. If one were placed at the distance of Tabby’s Star – that weird dimming star about 1,470 light-years away – then VERITAS could detect it. However, most of the stars that VERITAS will observe are 10-100 times closer than that, so feasibly a pulse of light 100-10,000 times fainter than that earthly laser could be found.

VERITAS being able to search for alien light signals is a great bonus, since that is not what it was designed for. As David Williams at the University of California, Santa Cruz said:

It is impressive how well-suited the VERITAS telescopes are for this project, since they were built only with the purpose of studying very-high-energy gamma rays in mind.

In California, the SETI Institute is also using Lick Observatory‘s 40-inch Nickel Telescope on Mount Hamilton with a new pulse-detection system, to look for similar laser beacons from civilizations many light-years distant. Optical SETI has its advantages over radio SETI, such as no radio signal interference, according to Frank Drake, director of the Carl Sagan Center for Research:

One great advantage of optical SETI is that there’s no terrestrial interference. It’s an exciting new field.

This Lick experiment is unique as it uses three light detectors (photomultipliers) to search for bright pulses that arrive in a short period of time (less than a billionth of a second). Light from the star itself can also trigger the detectors as well, but seldom will all three photomultipliers be hit by photons within a billionth of a second time frame. This means few false alarms are expected, only about one per year. 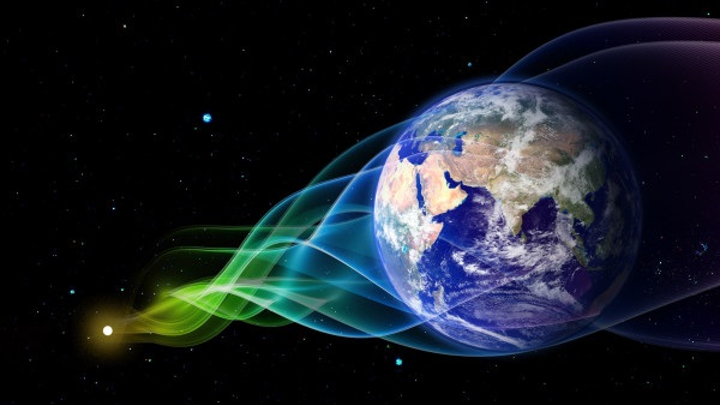 Other SETI searches, such as with Lick Observatory’s 40-inch Nickel Telescope, are also looking for laser pulses from advanced civilizations. Image via SETI/LaserFocusWorld.

New and novel ways of looking for evidence of extraterrestrial intelligence are welcome, since the previous, traditional SETI method of just searching for radio signals is considered by many to be antiquated. Would a civilization thousands or millions of years more advanced then us still be using radio waves to communicate? SETI and other searches should be as broad as possible, and consider alternate possibilities for the best chance of success. With billions of stars in our galaxy alone, the hunt for such signals is like looking for a needle in a haystack. VERITAS is just one such alternate method, but it is a good start.

Breakthrough Listen is a comprehensive initiative to search for evidence of intelligent, technological life from nearby stars to the universe at large. The objective is to examine one million nearby stars, all the stars in the galactic plane and 100 nearby galaxies, for both radio and optical signals. Not a small undertaking, but if there is to be any chance of finding an alien light show, then we must look. 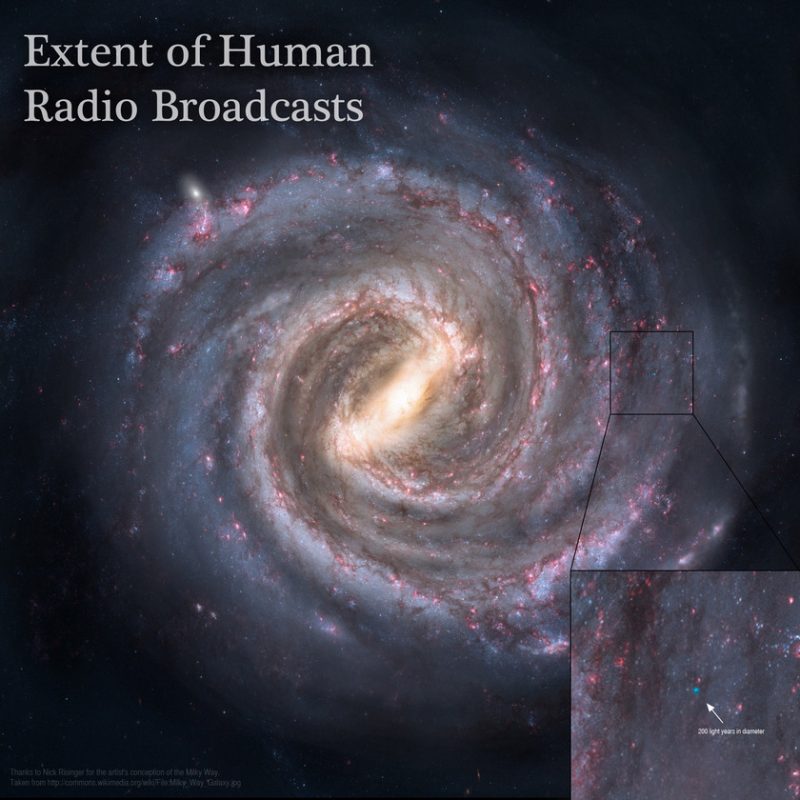 This is how far human radio broadcasts have reached into the galaxy – not the black square – but the little blue dot at the center of that zoomed-in square. The ever-expanding bubble announcing humanity’s presence to anyone listening in the Milky Way is now only about 200 light-years wide, in contrast to our 100,000-light-year galaxy. Graphic created by Adam Grossman. Read more from Emily Lakdawalla at the Planetary Society.

Bottom line: Using VERITAS, the search for intelligent alien life will broaden in its scope, looking not only for radio signals but also laser-like optical flashes of light that an advanced civilization might use as communication beacons.