On August 14, gravitational wave detectors in the US and Italy sensed ripples in space-time. Data analysis suggests they came from a black hole engulfing a neutron star, 900 million light-years from Earth. If so … it’s a first-ever detection by earthly scientists. 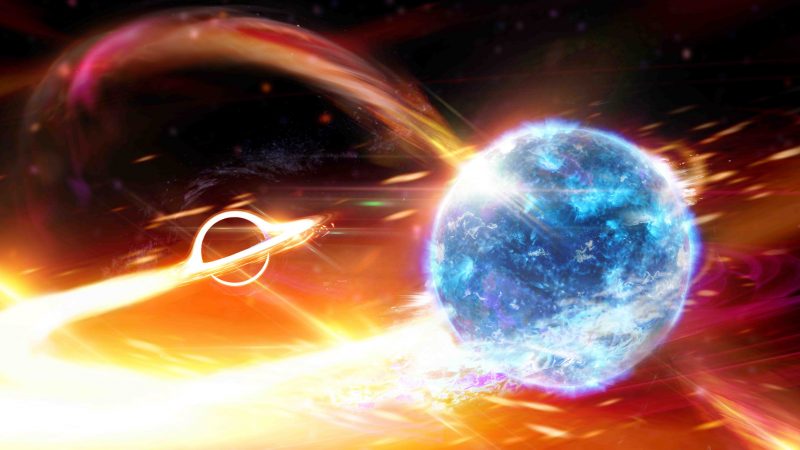 Artist’s concept of a scene that could occur when a black hole and neutron star meet, in a galaxy far, far away. Image via ANU.

Scientists began announcing late last week that they believe they’ve detected a black hole swallowing a neutron star. Both of these objects represent the super-dense remains of dead stars. In this case, they reside 900 million light-years away – far from our Milky Way galaxy – so we know their meeting, if it happened, took place 900 million years ago. It has taken all those years for gravitational waves – ripples in space and time created in their meeting – to travel to Earth, to be sensed finally on Wednesday, August 14, 2019, via a trio of gravitational-wave detectors in the United States and Italy.

Scientists are sounding cautiously excited about this detection. Writing in Science on August 16, 2019, Andrew Cho said:

Gravitational-wave hunters may have spotted their most exotic quarry yet. On 14 August at 5:10:39 p.m. EDT, a trio of gigantic detectors in the United States and Italy detected a pulse of gravitational waves – ripples in space itself – apparently set off when a black hole and a neutron star spiraled into each other about 900 million light-years away. Observers had previously spotted numerous mergers of black holes and one merger of neutron stars, but never a combination. The new find could give new insights into neutron stars, which are made of the densest matter in the cosmos.

There’s every reason to think black holes do swallow neutron stars sometimes, just as they might swallow anything else that comes too close to them. The gravitational waves indicate that something happened, and analysis suggests masses for the merging objects in line with those of black holes and neutron stars. Susan Scott, who is the leader of the General Relativity Theory and Data Analysis Group at the Australian National University, has been involved in the analysis. In a statement released August 19, 2019, Scott said:

About 900 million years ago, this black hole ate a very dense star, known as a neutron star, like Pac-man – possibly snuffing out the star instantly.

And she said scientists are still analyzing the data to confirm the exact size of the two objects, but initial findings indicate the very strong likelihood of a black hole enveloping a neutron star. The final results are expected to be published in scientific journals. Scott explained:

Scientists have never detected a black hole smaller than five solar masses or a neutron star larger than about 2.5 times the mass of our sun.

Based on this experience, we’re very confident that we’ve just detected a black hole gobbling up a neutron star.

However, there is the slight but intriguing possibility that the swallowed object was a very light black hole – much lighter than any other black hole we know about in the universe. That would be a truly awesome consolation prize. 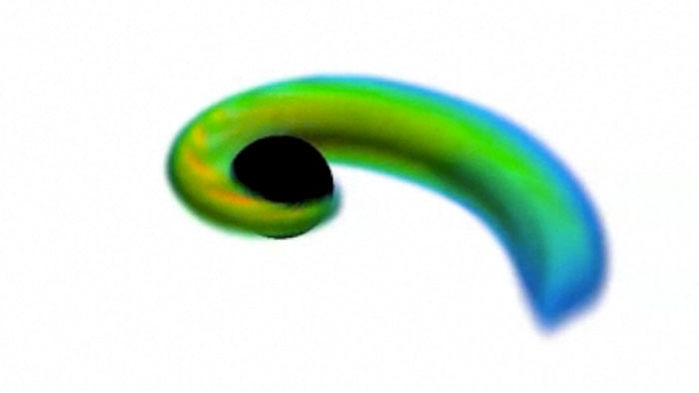 What do we know of black hole/neutron star mergers? One way to study them from Earth is to create simulations, like this one via Simulating Extreme Spacetimes (CC BY-NC 3)/Science.