Globular star clusters contain our galaxy’s most ancient stars. Astronomers didn’t expect to find a 4-solar-mass black hole in one, but … voila! 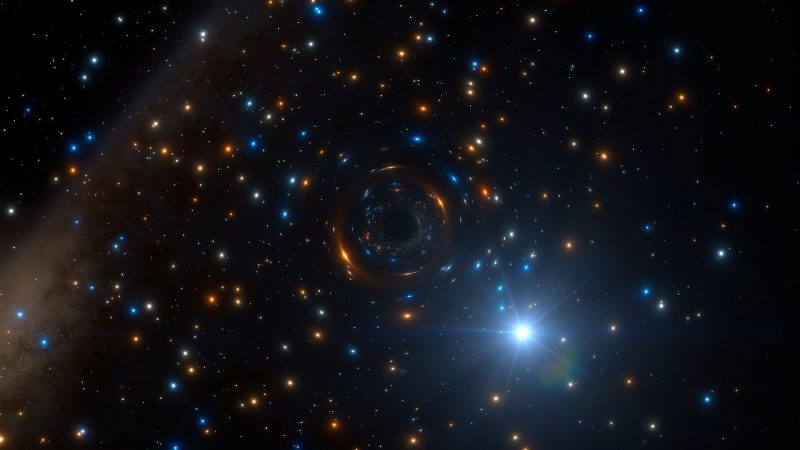 Artist’s concept of a 4-solar-mass black hole in the globular star cluster NGC 3201, via ESO.

A star in the globular star cluster NGC 3201 is behaving very strangely. It’s being flung backwards and forwards at speeds of several hundred thousand kilometers per hour, with the pattern repeating every 167 days. Astronomers think this star is orbiting an invisible black hole, with four times our sun’s mass. If so, it’s the first inactive black hole to be found in a globular cluster, and the first one found by directly observing its gravitational pull.

Astronomers said this important discovery relates not only to our understanding of the formation of these star clusters and black holes, but also to the origins of gravitational wave events, thought to happen during the merging of two black holes in this mass range.

Our home galaxy, the Milky Way, is know to have more than 150 globular star clusters. They’re symmetrical spheres of tens of thousands of ancient stars, orbiting outside the flat disk of the galaxy and thought to have formed early in the galaxy’s history, at about the same time the Milky Way itself was forming.

NGC 3201 is thought to be more than 10 billion years old (in contrast to our sun’s age of about four-and-a-half billion years). It’s located in our sky in the direction to the southern constellation of Vela the Sails, at a distance of some 16,300 light-years from Earth. The estimated mass of the whole cluster is about 254,000 times that of our sun.

Astronomers studied this cluster using the MUSE instrument on ESO’s Very Large Telescope in Chile. Lead author Benjamin Giesers of Georg-August-Universität Göttingen in Germany noticed the strange behavior of a particular star in the cluster. He said:

It was orbiting something that was completely invisible, which had a mass more than four times the sun — this could only be a black hole! The first one found in a globular cluster by directly observing its gravitational pull. 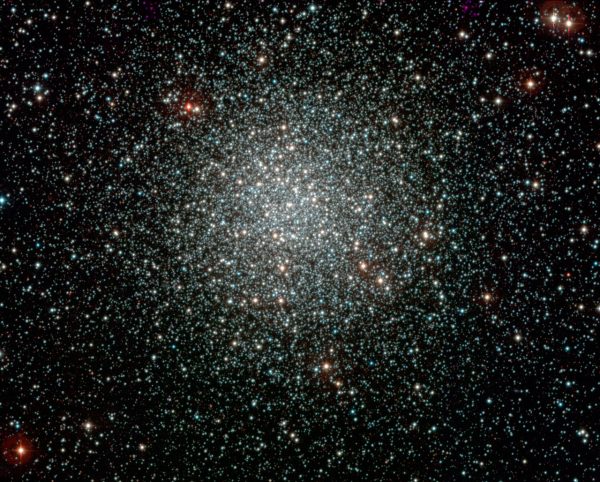 Color-composite image of the globular cluster NGC 3201, obtained with the WFI instrument on the ESO/MPG 2.2-m telescope at La Silla. Image via ESO. 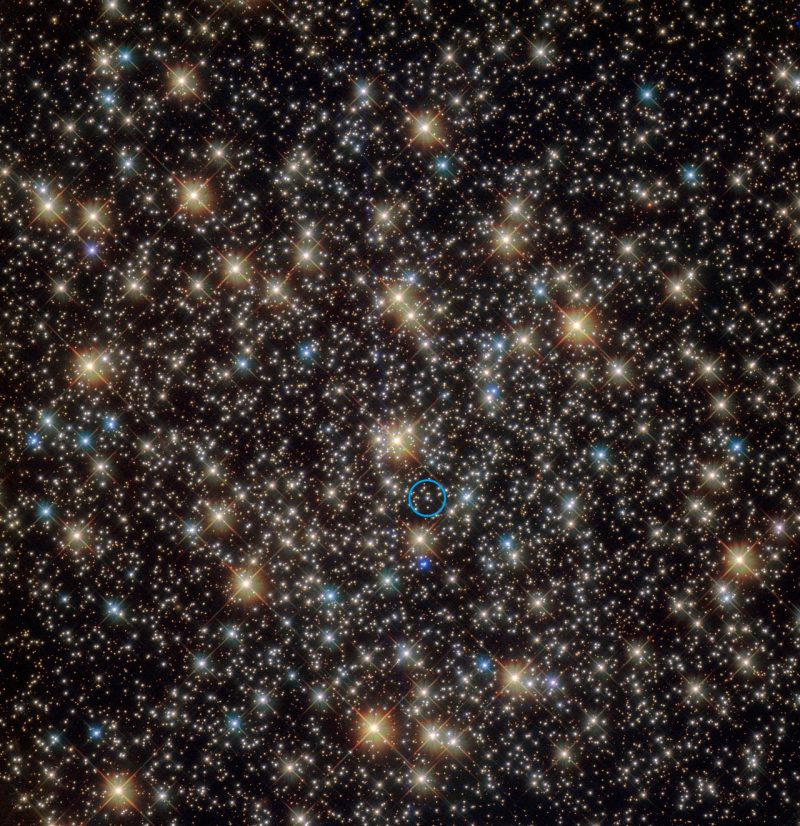 Hubble Space Telescope image of the central region of NGC 3201. The blue circle surrounds the star that’s behaving strangely, thought to be orbiting a black hole. Image via ESO.

The relationship between black holes and globular clusters is an important but mysterious one. Because of their large masses and great ages, these clusters are thought to have produced a large number of stellar-mass black holes — created as massive stars within them exploded and collapsed over the long lifetime of the cluster.

ESO’s MUSE instrument provides astronomers with a unique ability to measure the motions of thousands of faraway stars at the same time. With this new finding, the team have for the first time been able to detect an inactive black hole at the heart of a globular cluster — one that is not currently swallowing matter and is not surrounded by a glowing disk of gas. They could estimate the black hole’s mass through the movements of a star caught up in its enormous gravitational pull.

From its observed properties the star was determined to be about 0.8 times the mass of our sun, and the mass of its mysterious counterpart was calculated at around 4.36 times the sun’s mass — almost certainly a black hole.

Until recently, it was assumed that almost all black holes would disappear from globular clusters after a short time and that systems like this should not even exist! But clearly this is not the case. 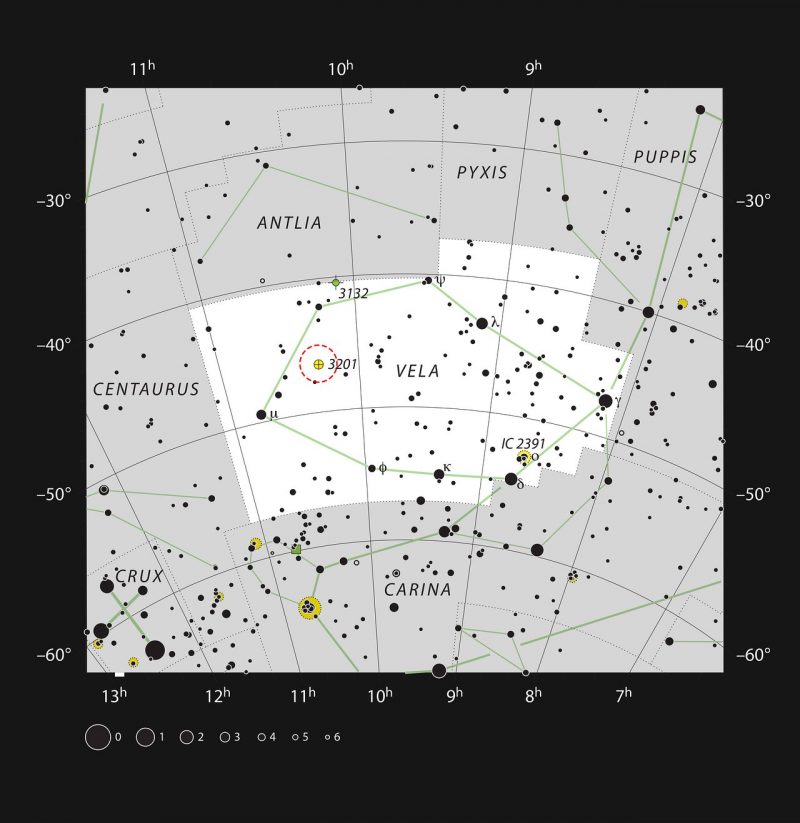 This chart shows the constellation Vela and marks most of the stars visible to the unaided eye on a clear dark night. The globular star cluster NGC 3201 is marked with a red circle. This cluster can be seen dimly in binoculars and is resolved into many faint stars with a moderate-sized amateur telescope. Chart via ESO, IAU and Sky & Telescope.

Bottom line: Astronomers observed the strange behavior of a star in the globular cluster cluster NGC 3201 and concluded it must be orbiting a four-solar-mass black hole.

Source: “A detached stellar-mass black hole candidate in the globular cluster NGC 3201”, by B. Giesers et al., to appear in the journal Monthly Notices of the Royal Astronomical Society.