Only 2 other fossil clouds are known in our universe, and both were serendipitous discoveries. Then astronomers began searching for these rare relics, and found one! 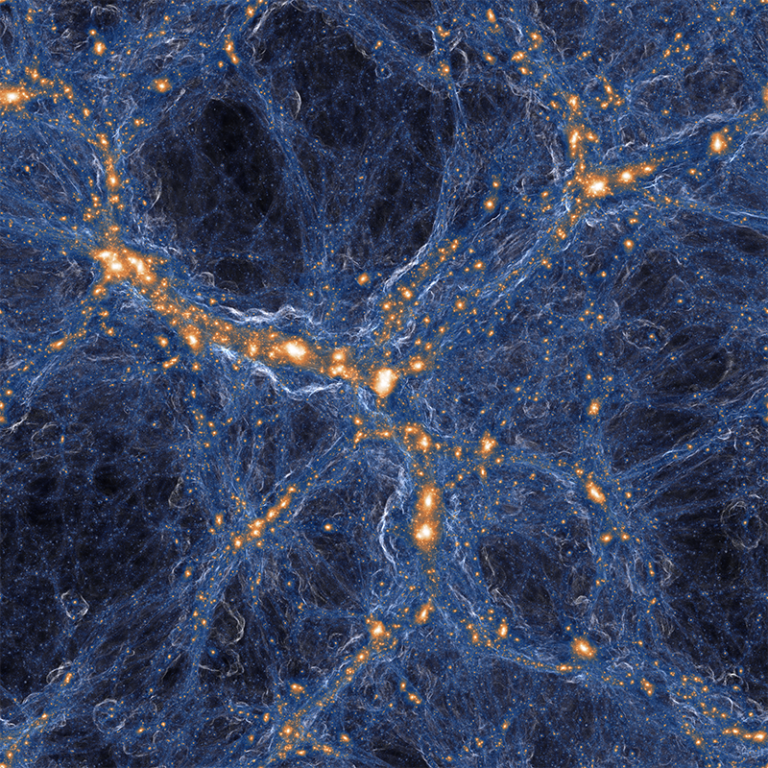 Simulation of galaxies and gas in the universe. Within the gas in the (blue) filaments connecting the (orange) galaxies lurk rare pockets of pristine gas – vestiges of the Big Bang that have somehow been orphaned from the explosive, polluting deaths of stars, seen here as circular shock waves around some orange points. Image via TNG COLLABORATION.

Astronomers using the powerful twin optical telescopes at the W. M. Keck Observatory on Maunakea, Hawaii, have used the light of a quasar to discover a relic cloud of gas in the distant universe. They’re calling it a “fossil” from our universe’s earliest time. How do they know it’s a young cloud? The cloud is made mainly of the elements born in the Big Bang, hydrogen and helium. It lacks the heavier elements that are born inside stars and released to the universe via supernova explosions. Astronomers Fred Robert and Michael Murphy at Swinburne University of Technology made the discovery. Robert commented in a statement:

Everywhere we look, the gas in the universe is polluted by waste heavy elements from exploding stars. But this particular cloud seems pristine, unpolluted by stars even 1.5 billion years after the Big Bang.

If it has any heavy elements at all, it must be less than 1/10,000th of the proportion we see in our sun. This is extremely low; the most compelling explanation is that it’s a true relic of the Big Bang.

Robert and Murphy’s results have been accepted for publication in the peer-reviewed journal Monthly Notices of the Royal Astronomical Society (preprint available here).

These astronomers used two of Keck Observatory’s instruments – the Echellette Spectrograph and Imager (ESI) and the High-Resolution Echelle Spectrometer (HIRES) – to observe the spectrum of a quasar behind the gas cloud. The quasar – labeled PSS1723+2243 – emits a bright glow from material falling into a supermassive black hole, providing a light source against which, these astronomers said:

… the spectral shadows of the hydrogen in the gas cloud can be seen.

We targeted quasars where previous researchers had only seen shadows from hydrogen and not from heavy elements in lower-quality spectra. This allowed us to discover such a rare fossil quickly with the precious time on Keck Observatory’s twin telescopes.

Only two other Big Bang fossils are known. These two clouds were discovered in 2011 by Michele Fumagalli of Durham University, John O’Meara, recently named the new Chief Scientist at Keck Observatory, and J. Xavier Prochaska of the University of California, Santa Cruz. Both Fumagalli and O’Meara are co-authors on the new research. O’Meara said:

The first two were serendipitous discoveries, and we thought they were the tip of the iceberg. But no one has discovered anything similar – they are clearly very rare and difficult to see. It’s fantastic to finally discover one systematically.

It’s now possible to survey for these fossil relics of the Big Bang. That will tell us exactly how rare they are and help us understand how some gas formed stars and galaxies in the early universe, and why some didn’t.

Bottom line: Astronomers used the light of a distant quasar to discover a cloud made mainly of elements released in the Big Bang, lacking the heavier elements made inside stars. They’re calling this cloud a “fossil” of the Big Bang.

Source: Exploring the origins of a new, apparently metal-free gas cloud at z = 4.4

Via the W. M. Keck Observatory