It’s a huge bipolar gas structure, hundreds of light-years across, centered on our galaxy’s center and near the galaxy’s central supermassive black hole. Astronomers found it with the new, supersensitive MeerKAT telescope in South Africa. 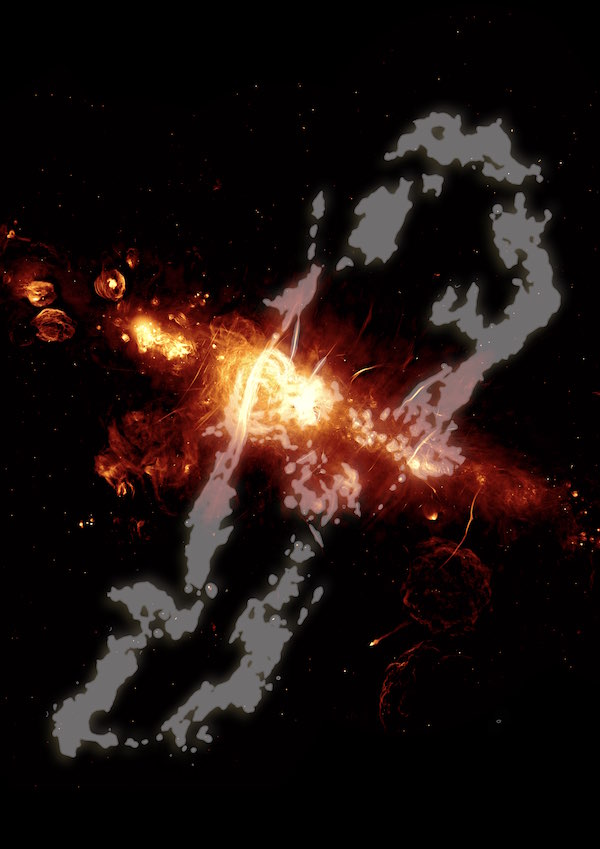 The complex radio emission from the galactic center, as imaged by the South African MeerKAT radio telescope. The newly-discovered giant radio bubbles are the structures running top to bottom in this image. Image via SARAO/Oxford.

Our Milky Way is considered to be a relatively quiescent galaxy, and yet – at its heart – it’s known to have a 4-million-solar-mass black hole: the source of many fascinating and dynamic processes. Yesterday – September 11, 2019 – astronomers announced the discovery in that region of what they’re calling “one of the largest features ever observed” in the center of the Milky Way. This feature is a pair of enormous radio-emitting bubbles, towering above and below the central region of our galaxy. Scientists described it as hourglass-shaped. The entire structure stretches some 1,400 light-years, or about 5% of the distance between our sun and the galaxy’s center.

This new discovery was announced today in the journal Nature, which also published the initial study of the feature. They said in a statement that it:

… dwarfs all other radio structures in the galactic center [and] is likely the result of a phenomenally energetic burst that erupted near the Milky Way’s supermassive black hole a few million years ago.

In other words, said these scientists, they believe features have formed from a violent eruption, presumably emanating from the vicinity of the galactic center and its supermassive black hole, which – over a short period of time – punched through the interstellar medium in opposite directions. As explained in Nature:

The bubbles are gas structures that can be observed because electrons stirring inside them produce radio waves as they are accelerated by magnetic fields. 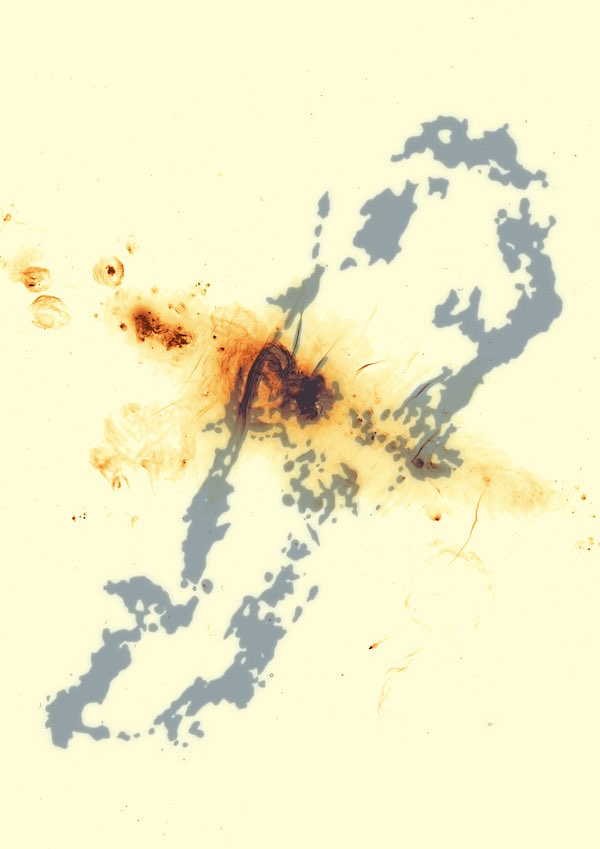 The team of astronomers that made the discovery was led by Ian Heywood of the University of Oxford in England. They used the new and supersensitive South African Radio Astronomy Observatory (SARAO) MeerKAT radio telescope to map out broad regions in the center of the galaxy. They conducted their radio observations at wavelengths near 23 centimeters (about 9 inches), which, they said:

… indicates energy generated in a process known as synchrotron radiation, in which free-floating electrons are accelerated as they interact with powerful magnetic fields. This produces a characteristic radio signal that can be used to trace energetic regions in space. The radio light seen by MeerKAT penetrates the dense clouds of dust that block visible light from the center of our galaxy.

Heywood, who processed the large amount of observational data leading to this result, said:

The center of our galaxy is relatively calm when compared to other galaxies with very active central black holes. Even so, the Milky Way’s central black hole can become uncharacteristically active, flaring up as it periodically devours massive clumps of dust and gas. It’s possible that one such feeding frenzy triggered powerful outbursts that inflated this previously unseen feature.

Previously unseen? Yes, in the radio part of the spectrum. But there’s another hourglass-shaped structure previously known by astronomers that might (or might not) be related to the MeerKAT bubbles. And that is the so-called Fermi Bubbles, confirmed by high-energy gamma ray observations in 2010. 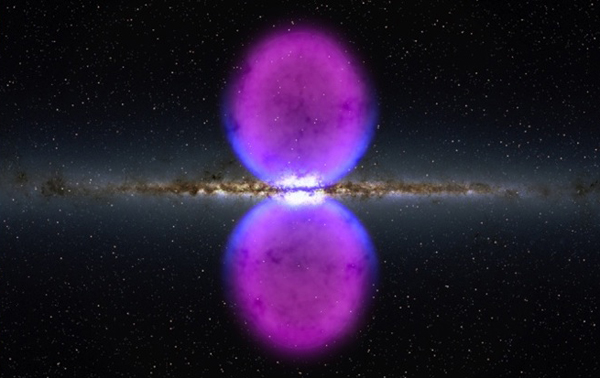 Hints of the Fermi Bubbles’ edges were first observed in X-rays (blue) by ROSAT, a joint German, U.S. and British X-ray observatory, which operated in space throughout the 1990s. Later, the Fermi Gamma-ray Space Telescope – launched in 2008 – confirmed the outlines of 2 vast bubbles extending for tens of thousands of light-years on either side of our galaxy’s core. Those observations are marked in magenta in this illustration. Image via NASA’s Goddard Space Flight Center.

I asked one of the authors on this new paper – Fernando Camilo, SARAO Chief Scientist in Cape Town, South Africa – how the new discovery relates to the Fermi Bubbles. He replied by email:

However, they are both huge bi-polar structures, symmetric about the galactic center, near the central supermassive black hole, and so your question does arise.

If that’s the case, the MeerKAT bubbles may well be an example of a series of such intermittent events that occasionally take place near the center of the Milky Way, governed by the black hole, the cumulative effect of which is responsible for other large scale structures seen at higher galactic latitudes (that is, away from the plane of the Milky Way), including structures seen in X-rays and, indeed, the Fermi gamma-ray Bubbles.

These enormous bubbles have until now been hidden by the glare of extremely bright radio emission from the center of the galaxy. Teasing out the bubbles from the background ‘noise’ was a technical tour de force, only made possible by MeerKAT’s unique characteristics and propitious location in the Southern Hemisphere. With this unexpected discovery we’re witnessing in the Milky Way a novel manifestation of galaxy-scale outflows of matter and energy, ultimately governed by the central black hole. 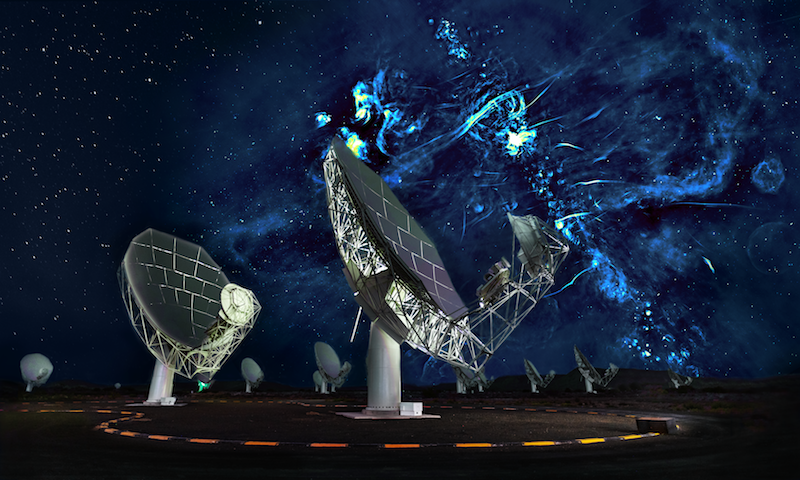 A composite of the radio bubbles and the MeerKAT telescope. A radio image of the center of the Milky Way with a portion of the MeerKAT telescope array in the foreground. The plane of the galaxy is marked by a series of bright features, exploded stars and regions where new stars are being born, and runs diagonally across the image from lower right to top center. The black hole at the center of the Milky Way is hidden in the brightest of these extended regions. The radio bubbles extend from between the two nearest antennas to the upper right corner. Many magnetized filaments can be seen running parallel to the bubbles. In this composite view, the sky to the left of the second nearest antenna is the night sky visible to the unaided eye, and the radio image to the right has been enlarged to highlight its fine features. Image via SARAO/Oxford.

Bottom line: Radio astronomers have spied a pair of enormous radio-emitting bubbles that tower hundreds of light-years above and below the central region of our galaxy.

Source: Inflation of 430-parsec bipolar radio bubbles in the Galactic Centre by an energetic event