Back to the future with Neptune’s fascinating moon Triton

On the anniversary of Voyager 2’s encounter with Neptune and Triton … an awesome collection of restored Voyager 2 images, plus the link between Triton and Pluto.

August 25, 1989. On this date, the incredibly durable and successful spacecraft Voyager 2 made the closest approach to Neptune and the large moon Triton. This has special significance with a current mission, New Horizons to Pluto.

Let me explain the Triton / New Horizons connection. Triton is the only large planet sized moon to orbit the parent planet in a backwards or retrograde direction, and also in a high inclination (that is, Triton’s orbit is significantly inclined to the plane of the solar system). Triton orbits Neptune once every 5 days, 21 hours and 3 minutes at a mean distance from Neptune of 354,800 kilometers / 220,331 miles. Triton has a diameter of 2,708 kilometers / 1,682 miles and a mean global density of 2.061 grams per cubic centimeter.

Prior to Voyager 2, it was thought that Triton was much larger, more like the size of Mercury, or the Jupiter moons Ganymede and Callisto or the Saturn moon Titan. However during Voyager 2’s approach, Triton appeared smaller and much more reflective than expected, approximately 90%. Also the Triton was very faint in the infrared part of the spectrum, meaning that Triton is extremely cold with an average surface global temperature of minus 237 Celsius / minus 395 Fahrenheit. That’s even taking into account the Neptune system’s distance from the sun of 4.515 billion kilometers / 2.804 billion miles (30.1 times the sun-to-Earth distance), where sunlight is only 1/906th that at Earth. Voyager 2 imaged 40% of Triton in detail, with a further 10% at lesser resolutions.

Triton certainly did not form around Neptune. Remember how people used to speculate that Pluto was an escaped moon of Neptune? The truth appears to be that Triton and Pluto are indeed related, but not in that way. Keep reading. 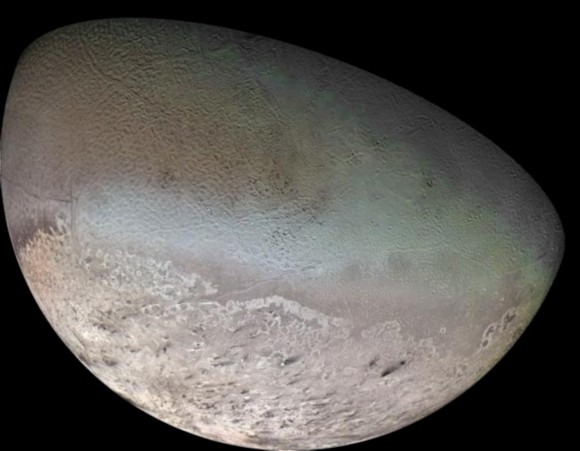 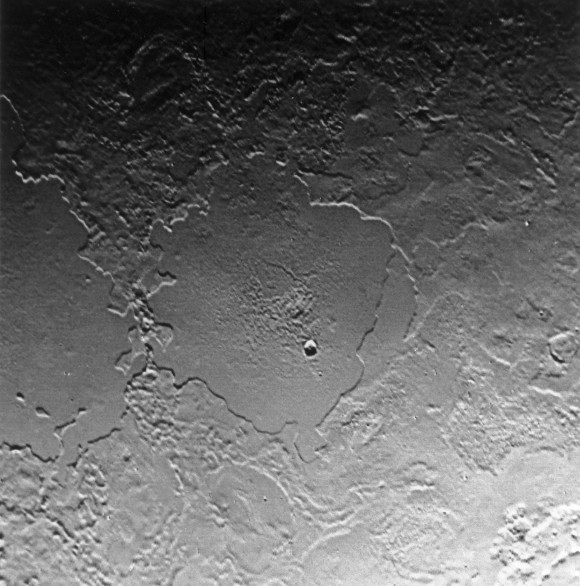 On Triton, Ruach Planitia, a frozen lake. Image via Voyager 2. 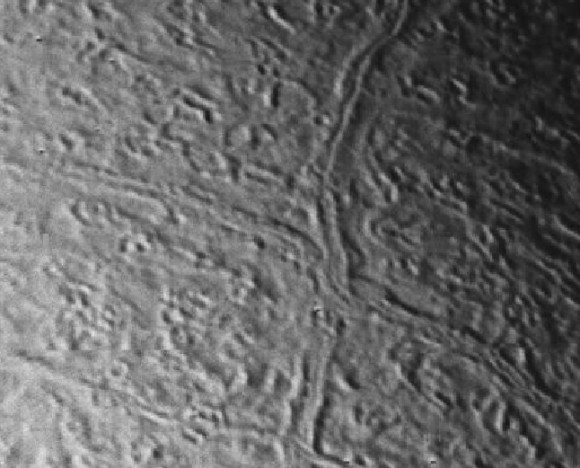 On Triton, cantaloupe terrain with faulting. Image via Voyager 2. 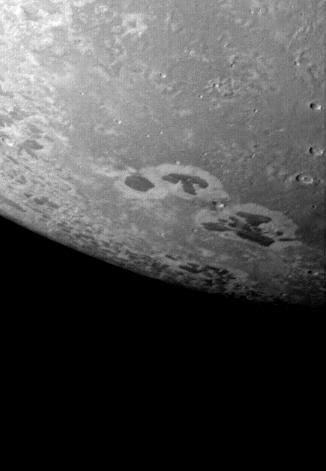 So Triton did not form around Neptune; that is a given fact. Captured moons are not unusual, both Mars moons, Phobos and Deimos are likely captured, as is the Saturn moon Phoebe (also in a retrograde orbit around Saturn and is the second largest such moon in our solar system), and many of the outer moons of Jupiter, Saturn, Uranus and Neptune. But those moons are relatively tiny. What stands Triton apart is its sheer size and mass. Triton is the 7th largest moon in the solar system (our own moon is 5th largest, and Jupiter’s Ganymede is the largest) and is more massive than all of the other moons in our solar system that are smaller than itself put together. Triton is approximately 70% rock, and 30% ice.

It appears that Triton was a former dwarf planet / KBO (Kuiper Belt Object) much like present day Pluto and Eris (similar in size and mass to Triton) the largest known KBOs / dwarf planets (see where I am going with this) that was captured into orbit around Neptune.

The initial orbit would have been very elliptical, as forward momentum was robbed from Triton by Neptune’s powerful gravity. Energy is never destroyed (proved by Albert Einstein in the famous equation E=MC2), so the forward energy was dissipated in the form of heat. The globe of Triton was stretched and squeezed, and Triton’s innards melted with frictional heat. Its surface melted, too. In fact, the original surface was completely destroyed and renewed, with slushy ices erupting and doing the resurfacing. We see similar resurfacing today with frictional heating under varying degrees with the Jupiter moons Io and Europa and the Saturn moon Enceladus (Io by far the most with huge volcanoes and tectonic activity).

When Triton’s orbit finally settled down, the surface refroze in the intense cold. Water ice on Triton today is as hard as solid rock at these temperatures, also carbon monoxide, carbon dioxide, ammonia, methane and nitrogen also exist as ice and were detected on Triton’s surface.

At the time of the Voyager 2 pass, Triton was near an extreme solstice, with most of its southern hemisphere in the sunlight of Triton’s midsummer. Its nitrogen ice cap was slowly sublimating and reforming on the northern mid-winter side. The tenuous Triton atmosphere (only 10 times denser than the exosphere through which the International Space Station orbits above Earth) displayed hazes and thin clouds. There are also geysers of nitrogen ice, where super-cooled liquid nitrogen was bursting through.

Now it appears that the capture of Triton occurred in geologically recent times, perhaps only 500 million years ago, judging by the low number of impact craters and fresh appearance of frozen icy lakes, Ruach Planitia being a good example, etc. Some parts of Triton’s surface could be as young as 10 million years.

The link with the upcoming Pluto encounter with New Horizons next July? Pluto is only a little smaller than Triton, 2,368 kilometers / 1,470 miles wide, similar densities, similar surface temperature, slightly warmer due to a slightly darker surface colouring at minus 229 Celsius / minus 380 Fahrenheit, similar rock to ice ratio (70% to 30%). Pluto appears to be like Triton before Triton was captured by Neptune, so the appearance will certainly be very different, more cratered for sure. 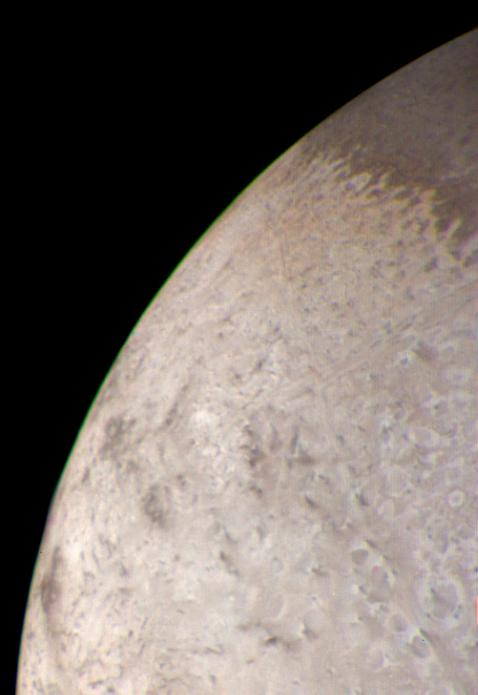 The limb (edge) of Triton in color via Voyager 2. 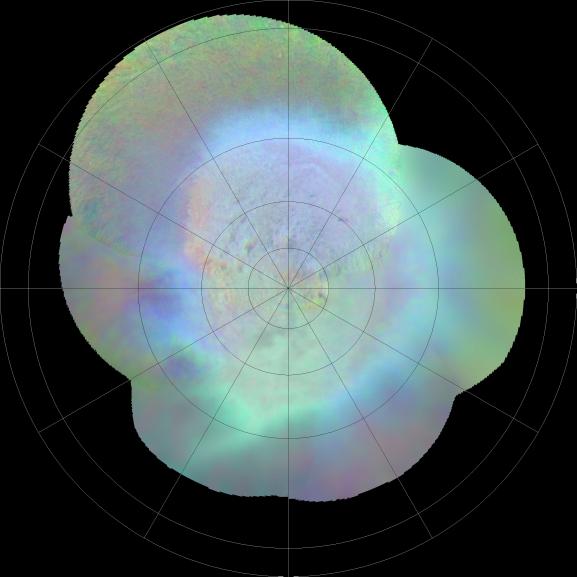 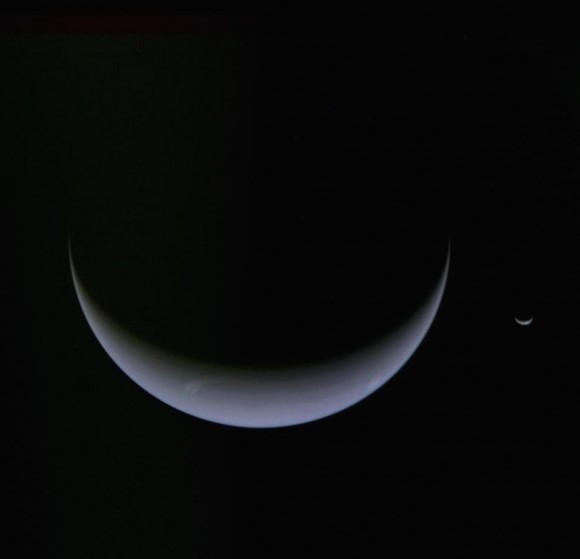 Neptune and Triton, via Voyager 2.

Bottom line: On the anniversary of Voyager 2’s encounter with Neptune and Triton … an awesome collection of restored Voyager 2 images, plus the link between Triton and Pluto.