They used the ALMA telescope to observe a slow outflow and a high speed jet from a newly forming star. These two streams appear misaligned and were apparently launched from different parts of the star-forming disk. 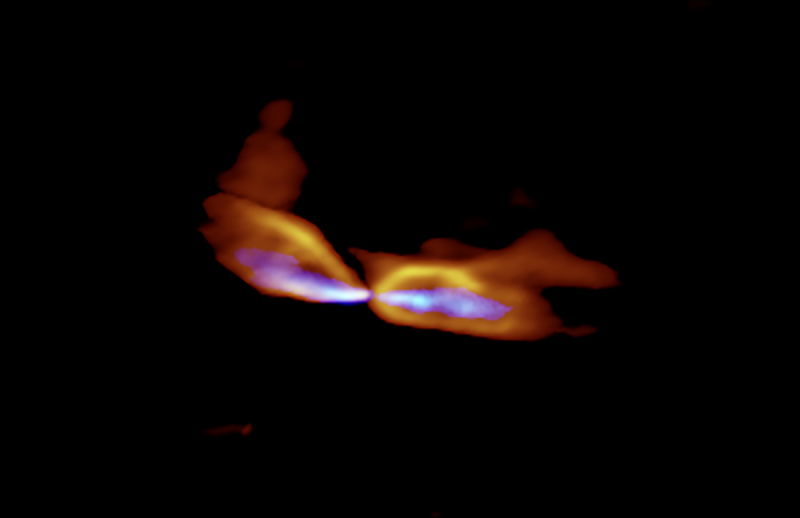 View larger. | ALMA image of the protostar MMS5/OMC-3. The slow outflow is shown in orange and the fast jet is shown in blue. You can see that the axes of the outflow and jet are misaligned. Image via ALMA.

Astronomers have used the ALMA telescope in Chile to obtain the clearest view yet of the region around a newly forming star – or protostar – labeled MMS5/OMC-3. They observed two different gas flows from the star, one a slow outflow and the other a fast jet. They were able to see the the axes of the two flows are misaligned by 17 degrees. What’s more, they learned the slow outflow was apparently ejected earlier than the jet. The astronomers said in a statement:

The origins of these two flows have been a mystery, but these observations provide telltale signs that these two streams were launched from different parts of the disk around the protostar.

Stars are born in clouds of gas and dust. Baby stars, or protostars, collect the gas with their gravitational pull; however, some of the material is ejected by the protostars. The astronomers said this ejected material forms a “stellar birth cry” that provides clues to understanding the process of how newly forming stars accumulate mass. 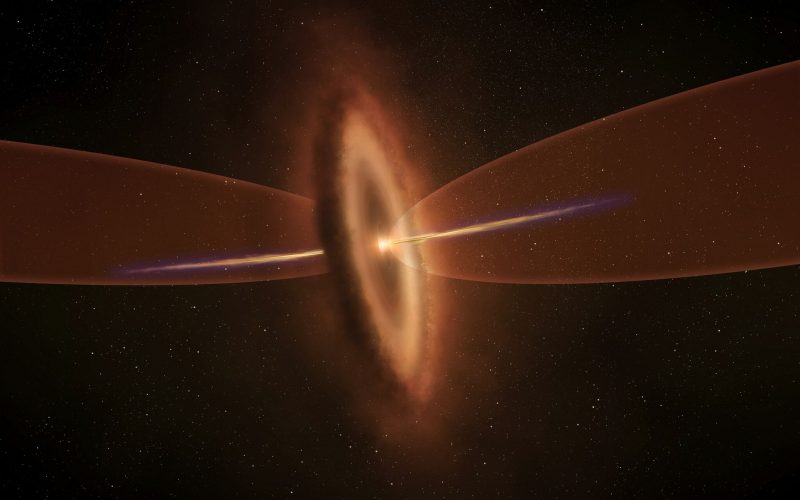 View larger. | Artist’s concept of the baby star MMS5/OMC-3. ALMA observations identified two gas streams from the protostar, a collimated fast jet and a wide-angle slow outflow, and found that the axes of the two gas flows are misaligned. Image via NAOJ/ALMA.

Yuko Matsushita, a graduate student at Kyushu University, is lead author of a research paper on the protostar MMS5/OMC-3. The study was published in the peer-reviewed Astrophysical Journal. Matsushita explained that her team measured the Doppler shift of radio waves from this star. In this way, she said:

… we can estimate the speed and lifetime of the gas flows. We found that the jet and outflow were launched 500 years and 1,300 years ago, respectively. These gas streams are quite young.

But then the misaligned axes of the two gas outflows has to be explained. It’s possible for the axis of the flows to be changed over long time periods due to the precession – the slow movement of the axis – of the central star. But in this case, these astronomers said:

… considering the extreme youth of the gas streams, [we] concluded that the misalignment is not due to precession but is related to the launching process.

There are two competing models for how protostars create their outflows and jets. Some researchers assume that the two streams are formed independently in different parts of the gas disk around the central baby star. Others propose that the collocated jet is formed first, then it entrains – or draws along with itself – the surrounding material to form the slower outflows. Despite extensive research, astronomers had not yet reached a conclusive answer.

Masahiro Machida is a professor at Kyushu University who – a decade ago – performed pioneering simulation studies using a supercomputer operated by the National Astronomical Observatory of Japan. In the simulation, the wide-angle outflow is ejected from the outer area of the gaseous disk around a prototar, while the collimated jet is launched independently from the inner area of the disk. Machida said:

The observation well matches the result of my simulation.

An observed misalignment between the two gas streams may indicate that the disk around the protostar is warped.

Satoko Takahashi, an astronomer at the National Astronomical Observatory of Japan and the Joint ALMA Observatory and co-author of the paper, said:

ALMA’s high sensitivity and high angular resolution will enable us to find more and more young, energetic outflow-and-jet-systems like MMS5/OMC-3.

They will provide clues to understand the driving mechanisms of outflows and jets. Moreover studying such objects will also tell us how the mass accretion and ejection processes work at the earliest stage of star formation.

Bottom line: The ALMA telescope in Chile examined a mysterious slow outflow and high speed jet from a newly forming star labeled MMS5/OMC-3. The two flows are now known to have independent origins, to be misaligned by some 17 degrees and to have been launched from the star at different times.