What Venus Express learned by aerobraking

Results from the Venus Express spacecraft, obtained when – in the craft’s final months – it surfed the dense atmosphere of Venus. 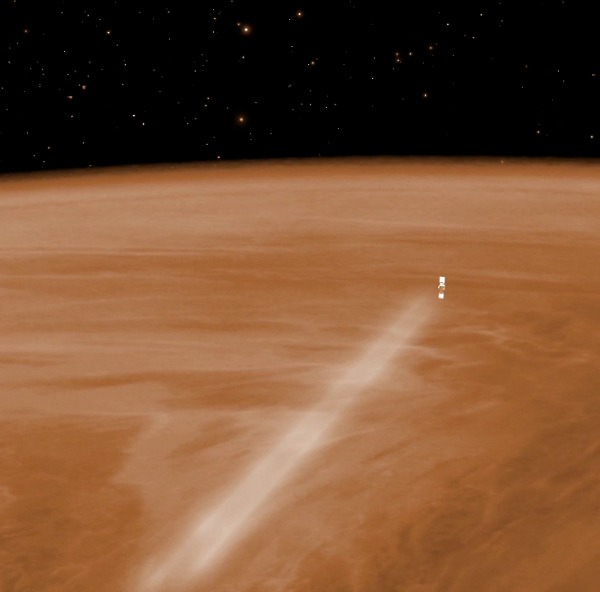 Remember in 2014 when scientists from the European Space Agency (ESA) let their Venus Express spacecraft – which had been orbiting Venus since 2006 – get so close to the planet’s dense atmosphere that it experienced atmospheric drag? That maneuver is known as aerobraking, and this month ESA announced some of the final results sent back by Venus Express before its final plummet to the planet’s surface. The data show the planet’s atmosphere to be rippling with atmospheric waves and colder than anywhere on Earth. The journal Nature Physics published the findings on April 11, 2016.

ESA’s Venus Express mission was supposed to last 500 days, but the craft ultimately spent eight years exploring Venus from orbit, before running out of fuel. Then the fun really began. The craft began a controlled descent, dipping further and further into Venus’s atmosphere. The craft used its onboard accelerometers to measure its own deceleration as it aerobraked, or surfed through the planet’s upper atmosphere.

Ingo Müller-Wodarg of Imperial College London, UK, lead author of the study, said in a statement from ESA:

Aerobraking uses atmospheric drag to slow down a spacecraft, so we were able to use the accelerometer measurements to explore the density of Venus’ atmosphere.

None of Venus Express’ instruments were actually designed to make such in-situ atmosphere observations. We only realized in 2006 – after launch – that we could use the Venus Express spacecraft as a whole to do more science.

In the late 1970s, an early spacecraft – NASA’s Pioneer Venus – did gather data on Venus’ atmosphere, but only near the planet’s equator. The data were used to create of model of how Venus atmosphere works.

Meanwhile, the atmosphere above the poles had never before been studied in situ. Müller-Wodarg and colleagues gathered their observations while Venus Express was in a polar orbit, at an altitude about 80 miles (130 km) above Venus’ polar regions, from June 18 to July 11, 2014. 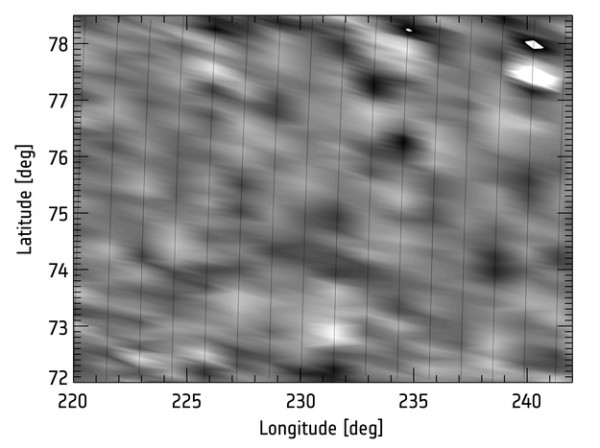 These new measurements were used to test the older model, and, as always happens when we see nature in more detail, scientists got surprises.

They found the atmosphere above Venus’ poles to be much colder than expected, with an average temperature of about -250 Fahrenheit (-157°C). Recent temperature measurements by Venus Express’s SPICAV instrument (SPectroscopy for the Investigation of the Characteristics of the Atmosphere of Venus) agree with this finding.

These lower densities could be at least partly due to Venus’s polar vortices, which are strong wind systems sitting near the planet’s poles. Atmospheric winds may be making the density structure both more complicated and more interesting!

Additionally, the polar region was found to be dominated by strong atmospheric waves, a phenomenon thought to be key in shaping planetary atmospheres, including that of Earth. The team used Venus Express data to study how the atmospheric densities changed and were perturbed over time, and they found two different types of wave: atmospheric gravity waves and planetary waves. Their statement explained:

Atmospheric gravity waves are similar to waves we see in the ocean, or when throwing stones in a pond, only they travel vertically rather than horizontally. They are essentially a ripple in the density of a planetary atmosphere — they travel from lower to higher altitudes and, as density decreases with altitude, become stronger as they rise.

The second type, planetary waves, are associated with a planet’s spin as it turns on its axis; these are larger-scale waves with periods of several days.

We experience both types on Earth. Atmospheric gravity waves interfere with weather and cause turbulence, while planetary waves can affect entire weather and pressure systems. Both are known to transfer energy and momentum from one region to another, and so are likely to be hugely influential in shaping the characteristics of a planetary atmosphere.

Venus Express lost contact with Earth in November, 2014, and the mission officially ended in December, 2014. It’ll be remembered for the aerobraking maneuver, which was ESA’s first aerobraking experience.

During this activity we will extract similar data about Mars’ atmosphere as we did at Venus.

For Mars, the aerobraking phase would last longer than on Venus, for about a year, so we’d get a full dataset of Mars’ atmospheric densities and how they vary with season and distance from the sun.

Read more about both missions from ESA 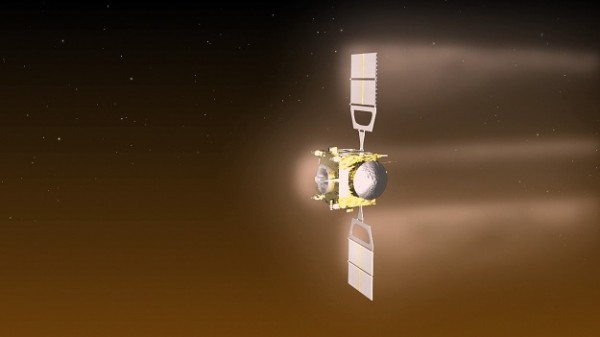 Artist’s concept of Venus Express while aerobraking. The craft was orbiting Venus at an altitude of about 80 miles (130 km) from June 18 to July 11, 2014.

Bottom line: ESA has announced some final results sent back by Venus Express obtained when – in the spacecraft’s final months – it surfed in Venus’ dense atmosphere. The data show the planet’s atmosphere to be rippling with atmospheric waves and colder than anywhere on Earth.