Astronomers are observing the “noodle effect” as the black hole’s powerful gravity stretches and elongates the cloud.

In 2011, astronomers in Germany announced the discovery of a cloud of gas – with several times the mass of the Earth – accelerating fast towards the supermassive black hole at the center of our Milky Way. They originally said that the cloud would pass closest to the black hole in mid-2013, but a new analysis suggests the date of closest passage as early 2014. The passage of the gas cloud near the black hole is already underway, and numerous observing programs have been set up to monitor the region around the Milky Way’s center during 2013.

In April 2013, data acquired at the European Southern Observatory (ESO) showed that part of the gas cloud has already passed closest to the black hole. As expected, the cloud is undergoing what astronomers sometimes call spaghettification – or the noodle effect. That is, it’s being stretched or elongated as it passes the hole, due to the hole’s powerful gravity.

The front part of the gas cloud is now already moving 500 km/s faster than its tail, astronomers say, confirming earlier predictions that the gas cloud is doomed. It’s not expected to survive its encounter with the black hole. 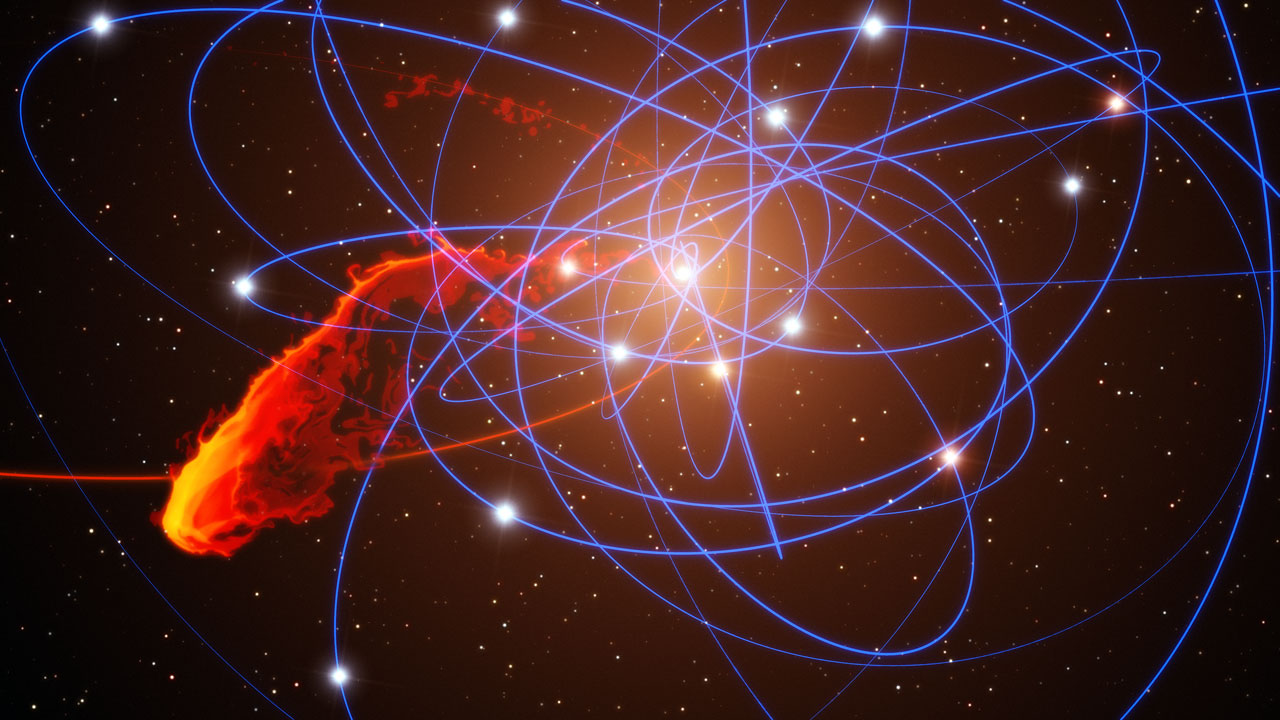 View larger. | This series of infrared images shows the central region of our Milky Way galaxy. The arrow indicates the gas cloud, which can be unambiguously detected up to 2012. In the 2013 images, though, the surface brightness of the gas cloud is too low for a firm detection. Image via the Max Planck Institute for Extraterrestrial Physics.

A team of astronomers at the Max-Planck Institute for Extraterrestrial Physics (MPE) in Germany made the original discovery of the gas cloud. For more than two decades, these astronomers have been using ESO telescopes to monitor the movement of stars around the Milky Way’s central, supermassive black hole. Yesterday (July 16, 2013), MPE team said it has now placed new constraints the origins of the gas cloud. They say it is increasingly unlikely that the cloud contains a faint star, from which the cloud might have formed. If it’s not a star shedding gas to create this gas cloud, then where did the gas cloud come from? The MPE team said:

Several options have been proposed, ranging from recent formation due to a collision between stellar winds and the interstellar medium or the possible jet emerging from the galactic center to a faint star that loses increasing amounts of gas. While the compactness of the gas cloud seems surprising for any of these scenarios, the shape of the tidal shear argues against models with a stellar core that would constantly supply new gas. Instead, the orientation of the orbit continues to favor an origin connected to the disk of young, massive stars surrounding the black hole further out. Another possibility for the origins of the gas cloud is that its material may have come from nearby young massive stars that are rapidly losing mass due to strong stellar winds. Such stars literally blow their gas away.

View larger. | These are position-velocity diagrams from 2004 to 2013, scaled to identical peak luminosities. You can see that the gas cloud becomes increasingly stretched, due to the powerful pull of the black hole’s gravity. Image via the Max Planck Institute for Extraterrestrial Physics.

This team has also re-analyzed archival data and says it can now give a better measurement of the gas cloud’s orbit:

The fastest components appear to move with a red-shifted velocity of 3000 km/s (or about 10 million km/h), while the brightest part of the head moves with about 2180 km/s. Further down the orbit, there seems to follow a tail, moving much slower with a velocity of only 700 km/s but along the same orbit.

In other words, parts of the cloud are moving at different speeds, a likely prelude to the cloud’s eventual destruction as it sweeps near the black hole at the center of our galaxy, in early 2014.

Read more via the Max-Planck Institute for Extraterrestrial Physics

Read more about the 2011 discovery of the gas cloud near the Milky Way’s black hole.