ES astronomers said on April 2 they seen telltale evidence of a black hole disrupting the outer atmosphere of a super-Jupiter.

ESA astronomers say they’ve made the first detection of a substellar object – either a brown dwarf or a giant planet (aka a super-Jupiter) – having its outer layers ripped off by a black hole. Earlier today (April 2, 2013), the astronomers released the video below, which is an animation portraying this event. The event took place in a galaxy called NGC 4845, 47 million light-years away. The animation shows the super-Jupiter moving through space, straying too close to the black hole (at the center of the screen). The black hole rips away the super-Jupiter’s outer layers, which then spiral into the hole. The debris becomes heated and emits a blast of x-rays, which the ESA astronomers observed.

The astronomers used ESA’s Integral space observatory to make this discovery, with follow-up observations from ESA’s XMM-Newton, NASA’s Swift and Japan’s MAXI X-ray monitor on the International Space Station. They say they were watching a different galaxy when they noticed a bright x-ray flare in the same wide field-of-view. The origin of the x-ray flare was confirmed as NGC 4845, a galaxy never before detected at high energies.

Maximum emission of x-rays by NGC 4845 was in January 2011. The galaxy got 1,000 times brighter in x-rays, then subsided over the course of the year. Marek Nikolajuk of the University of Bialystok, Poland, lead author of a paper about this event in the journal Astronomy & Astrophysics said:

The observation was completely unexpected, from a galaxy that has been quiet for at least 20–30 years.

By analyzing the characteristics of the x-ray flare, the astronomers could determine that the emission came from a halo of material around the galaxy’s central black hole as it tore apart and fed on an object of 14–30 Jupiter masses. This size range corresponds to brown dwarfs, substellar objects that are not massive enough to fuse hydrogen in their core and ignite as stars.

Read more from ESA about this story. 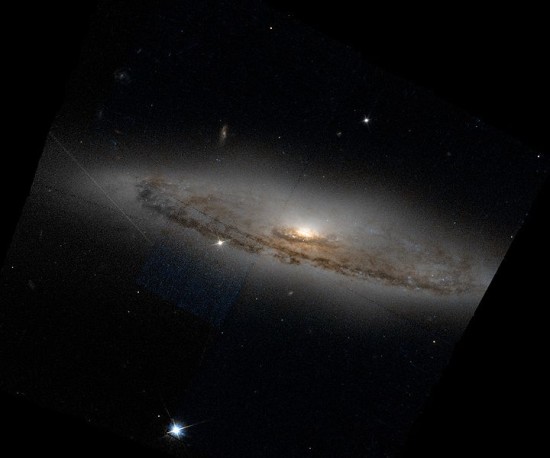 NGC 4845, 47 million light-years away. It was quiet in x-rays until its central black hole woke up and snacked on a passing super-Jupiter. Image via Wikimedia Commons.

Bottom line: Astronomers of the European Space Agency said on April 2, 2013 that they have, for the first time, observed the disruption of the outer atmosphere of a brown dwarf or super-Jupiter – an object with 14 to 30 times the mass of Jupiter – by a black hole.