Astronomers issue report on the effect of ‘satellite constellations’ on astronomy

A new report concludes that large constellations of bright satellites in low-Earth orbit will fundamentally change ground-based astronomy and impact the appearance of the night sky for stargazers worldwide. 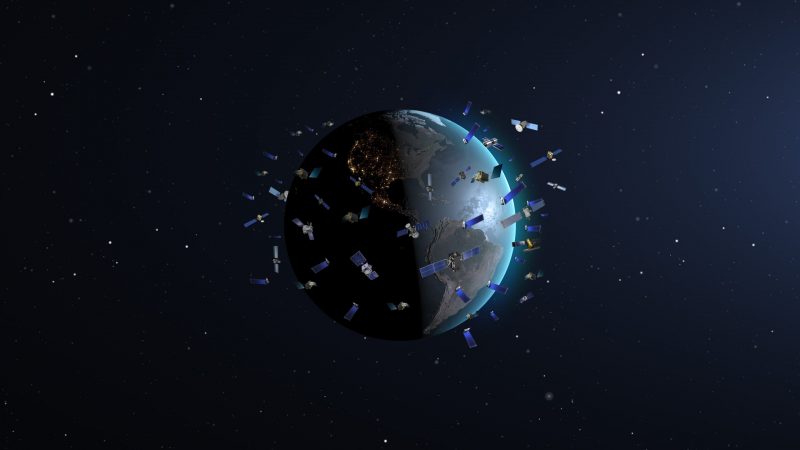 In May 2019, SpaceX launched its first batch of 60 Starlink communication satellites, designed to provide global internet access. Ultimately, SpaceX hopes to launch some 12,000 of these satellites, and possibly more. These satellite constellations have surprised astronomers and laypeople with their brightness in the night sky. Now, astronomers have accumulated enough observations to assess the Starlink satellites’ likely impact on astronomy. A new report by experts representing the global astronomical community concludes that the effects on astronomical research and on the human experience of the night sky range from “negligible” to “extreme.” Image via AAS/ NOIRLab/ NSF/ AURA/ P. Marenfeld.

Originally published by the American Astronomical Society on August 25, 2020

A report by experts representing the global astronomical community concludes that large constellations of bright satellites in low Earth orbit will fundamentally change ground-based optical and infrared astronomy and could impact the appearance of the night sky for stargazers worldwide. The report is the outcome of the recent SATCON1 virtual workshop, which brought together more than 250 scientists, engineers, satellite operators, and other stakeholders.

The report from the Satellite Constellations 1 (SATCON1) workshop, organized jointly by NSF’s NOIRLab and the American Astronomical Society (AAS), has been delivered to the National Science Foundation (NSF). Held virtually from June 29 to July 2, 2020, SATCON1 focused on technical aspects of the impact of existing and planned large satellite constellations on optical and infrared astronomy. NSF, which funded the workshop, also finances most of the large ground-based telescopes widely available to researchers in the United States. More than 250 astronomers, engineers, commercial satellite operators, and other stakeholders attended SATCON1. Their goals were to better quantify the scientific impacts of huge ensembles of low-Earth-orbiting satellites (LEOsats) contaminating astronomical observations and to explore possible ways to minimize those impacts.

Recent technology developments for astronomical research – especially cameras with wide fields of view on large optical-infrared telescopes – are happening at the same time as the rapid deployment of many thousands of LEOsats by companies rolling out new space-based communication technologies.

The report concludes that the effects of large satellite constellations on astronomical research and on the human experience of the night sky range from “negligible” to “extreme.” This new hazard was not on astronomers’ radar in 2010, when New Worlds, New Horizons – the report of the National Academies’ Astro2010 decadal survey of astronomy and astrophysics – was issued. Astro2010’s top recommendation for ground-based optical astronomy, Vera C. Rubin Observatory, will soon begin conducting exactly the type of observations to which Walker refers. When SpaceX launched its first batch of 60 Starlink communication satellites in May 2019 and people all over the world saw them in the sky, astronomers reacted with alarm. Not only were the Starlink satellites brighter than anyone expected, but there could be tens of thousands more like them. As they pass through Rubin’s camera field, they will affect the 8.4-meter (27.6-foot) telescope’s view of the faint celestial objects astronomers hope to study with it.

Rubin Observatory and the giant 30-meter telescopes coming online in the next decade will substantially enhance humankind’s understanding of the cosmos. For reasons of expense, maintenance, and instrumentation, such facilities cannot be operated from space. Ground-based astronomy is, and will remain, vital and relevant.

Constellations of LEOsats are designed in part to provide communication services to underserved and remote areas, a goal everyone can support. Recognizing this, astronomers have engaged satellite operators in cooperative discussions about how to achieve that goal without unduly harming ground-based astronomical observations. The SATCON1 workshop is just the latest, and most significant, step in this ongoing dialog.

The report offers two main findings. The first is that LEOsats disproportionately affect science programs that require twilight observations, such as searches for Earth-threatening asteroids and comets, outer solar system objects, and visible-light counterparts of fleeting gravitational-wave sources. During twilight the sun is below the horizon for observers on the ground, but not for satellites hundreds of kilometers overhead, which are still illuminated. As long as satellites remain below 600 kilometers (not quite 400 miles), their interference with astronomical observations is somewhat limited during the night’s darkest hours. But satellites at higher altitudes, such as the constellation planned by OneWeb that will orbit at 1,200 kilometers (about 750 miles), may be visible all night long during summer and for much of the night in other seasons. These constellations could have serious negative consequences for many research programs at the world’s premier optical observatories. Depending on their altitude and brightness, constellation satellites could also spoil starry nights for amateur astronomers, astrophotographers, and other nature enthusiasts.

The report’s second finding is that there are at least six ways to mitigate harm to astronomy from large satellite constellations:

1. Launch fewer or no LEOsats. However impractical or unlikely, this is the only option identified that can achieve zero astronomical impact.

2. Deploy satellites at orbital altitudes no higher than ~600 km.

3. Darken satellites or use sunshades to shadow their reflective surfaces.

4. Control each satellite’s orientation in space to reflect less sunlight to Earth.

5. Minimize or eventually be able to eliminate the effect of satellite trails during the processing of astronomical images.

6. Make more accurate orbital information available for satellites so that observers can avoid pointing telescopes at them.

Astronomers have only now, a little over a year after the first SpaceX Starlink launch, accumulated enough observations of constellation satellites and run computer simulations of their likely impact when fully deployed to thoroughly understand the magnitude and complexity of the problem. This research informed the discussion at SATCON1 and led to ten recommendations for observatories, constellation operators, and those two groups in collaboration. Some involve actions that can be taken immediately, while others urge further study to develop effective strategies to address problems anticipated as new large telescopes come online and as satellite constellations proliferate.

I hope that the collegiality and spirit of partnership between astronomers and commercial satellite operators will expand to include more members of both communities and that it will continue to prove useful and productive. I also hope that the findings and recommendations in the SATCON1 report will serve as guidelines for observatories and satellite operators alike as we work towards a more detailed understanding of the impacts and mitigations and we learn to share the sky, one of nature’s priceless treasures.

AAS President Paula Szkody of the University of Washington participated in the workshop. She said:

Our team at the AAS was enthusiastic to partner with NOIRLab and bring representatives of the astronomical and satellite communities together for a very fruitful exchange of ideas. Even though we’re still at an early stage of understanding and addressing the threats posed to astronomy by large satellite constellations, we have made good progress and have plenty of reasons to hope for a positive outcome.

The next workshop, SATCON2, which will tackle the significant issues of policy and regulation, is tentatively planned for early- to mid-2021.

Bottom line: A new report by experts concludes that large constellations of bright satellites in low-Earth orbit will fundamentally change ground-based astronomy and impact the appearance of the night sky for stargazers worldwide.