Astronomers map out Earth’s place in the universe

Where are we? Astronomers have created a map that shows our Milky Way galaxy and its immediate neighborhood in the universe. 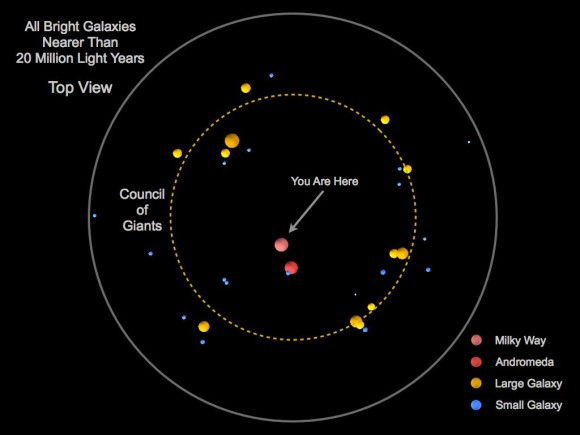 View larger. | A diagram showing the brightest galaxies within 20 million light years of the Milky Way, as seen from above. The largest galaxies, here shown in yellow at different points around the dotted line, make up the ‘Council of Giants’. Image credit: Marshall McCall/York University

We live in a galaxy known as the Milky Way – a vast conglomeration of 300 billion stars, planets whizzing around them, and clouds of gas and dust floating in between.

Although it has long been known that the Milky Way and its orbiting companion the Andromeda Galaxy are the dominant members of a small group of galaxies called the Local Group, which is about 3 million light years across, much less was known about our immediate neighborhood in the universe.

A new paper by Professor Marshall McCall of York University, Canada, maps out bright galaxies within 35-million light years of the Earth, offering up an expanded picture of what lies beyond our doorstep. The work was published today in the journal Monthly Notices of the Royal Astronomical Society. 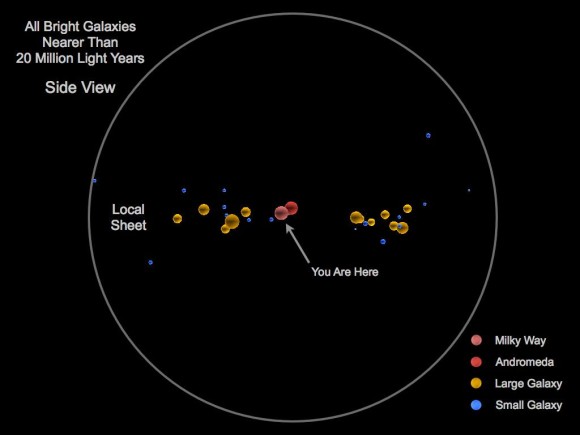 View larger. | A diagram showing the brightest galaxies within 20 million light years of the Milky Way, this time viewed from the side. Image credit: Marshall McCall/York University.

McCall says twelve of the fourteen giants in the Local Sheet, including the Milky Way and Andromeda, are “spiral galaxies” which have highly flattened disks in which stars are forming. The remaining two are more puffy “elliptical galaxies”, whose stellar bulks were laid down long ago. Intriguingly, the two ellipticals sit on opposite sides of the Council. Winds expelled in the earliest phases of their development might have shepherded gas towards the Local Group, thereby helping to build the disks of the Milky Way and Andromeda.

McCall also examined how galaxies in the Council are spinning. He comments: “Thinking of a galaxy as a screw in a piece of wood, the direction of spin can be described as the direction the screw would move (in or out) if it were turned the same way as the galaxy rotates. Unexpectedly, the spin directions of Council giants are arranged around a small circle on the sky. This unusual alignment might have been set up by gravitational torques imposed by the Milky Way and Andromeda when the universe was smaller.”