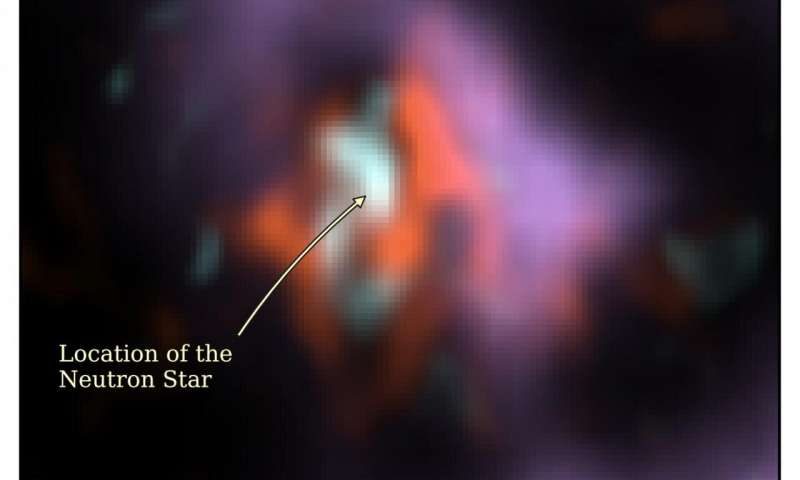 The location of the recently discovered neutron star at the core of the Supernova 1987A remnant. Image via Cardiff University.

A team of astronomers at the University of Cardiff, Wales, believe they have discovered the “missing” neutron star at the center of Supernova 1987A (SN1987A), whose detonation was first seen in earthly skies in February 1987. The explosion occurred in the Large Magellanic Cloud, a companion dwarf galaxy to our home galaxy, the Milky Way. The astronomers said they found this supernova’s neutron star using the ALMA telescope in Chile.

The neutron star finally seems to be emerging from a thick cloud of dust which has completely obscured it for the last 32 years.

The discovery was reported in the Astrophysical Journal on November 19. The team – led by astronomer Phil Cigan of Cardiff University – found a particularly bright patch of dust exactly where the neutron star was predicted to be. Cigan commented in a statement:

For the very first time we can tell that there is a neutron star inside this cloud within the supernova remnant. Its light has been veiled by a very thick cloud of dust, blocking the direct light from the neutron star at many wavelengths like fog masking a spotlight.

Astronomer Mikako Matsuura, also of Cardiff University, specializes in the study of dust and molecules in supernova remnants and is a co-author of this latest study. She commented:

Although the light from the neutron star is absorbed by the dust cloud that surrounds it, this in turn makes the cloud shine in sub-millimeter light, which we can now see with the extremely sensitive ALMA telescope. Our new findings will now enable astronomers to better understand how massive stars end their lives, leaving behind these extremely dense neutron stars.

Supernova 1987A was the brightest and closest supernova since Kepler’s supernova of 1604. It detonated on the edge of the Tarantula Nebula in the Large Magellanic Cloud. Since the supernova is some 168,000 light-years distant, the explosion actually occurred that long ago. Ian Shelton and Oscar Duhalde at the Las Campanas Observatory in Chile – and Albert Jones in New Zealand – were the first to spot the supernova in Earth’s skies in 1987.

A blue supergiant star called Sanduleak -69.202 had exploded, about which little was known. Astronomers were optimistic that by studying the event they could see if their theories about the death of massive stars were correct. The hope was that the supernova would leave behind a neutron star: better still, an easily detectable pulsar (all pulsars are neutron stars, but not all neutron stars are pulsars). If so, then the chain of events from core-collapse supernova explosion to neutron star could at last be verified. It was seen as something of a golden opportunity to confirm what we thought we knew about Type II supernovae and their aftermath.

But, as the initial glow subsided and astronomers in the Southern Hemisphere watched and waited, there were no radio bursts from a pulsar, no X-ray glow: there was nothing at all. It was soon realized that if there were any sort of star left behind at the center of the supernova remnant, it was behind huge quantities of dust, completely hidden from our view. Astronomers realized with disappointment, and the sense of something intensely valuable slipping from their grasp, that the dust would take a very long time to clear enough to reveal what it was masking. But there were also those who wondered, as the original mass of Sanduleak -69.202 was not known, if the reason there was no visible trace of any remnant was simply because what lurked in the dark, behind the wall of dust, was a new black hole.

And there was something quite unexpected about SN1987A, which was not realized until afterwards: about three hours before the explosion was seen in Chile, Japanese neutrino observatories had, between them, detected 25 neutrinos from the event. This was seen as confirmation that the bulk of neutrinos from supernovae are emitted some time before the star detonates. This pre-supernova detection of neutrinos can perhaps lay claim to be the first true multi-messenger astronomical event.

Apart from a brief flurry of excitement a few years after the supernova, as a group of radio astronomers thought they had detected brief pulsar emissions, nothing at the centre of the supernova remnant has been observed. The tentative pulsar signals were not confirmed nor repeated.

But now, at long last, astronomers have verification of their Type II supernova theories. The discovery demonstrates that astronomy is often a long and frustrating waiting game, where events play out over years and decades. 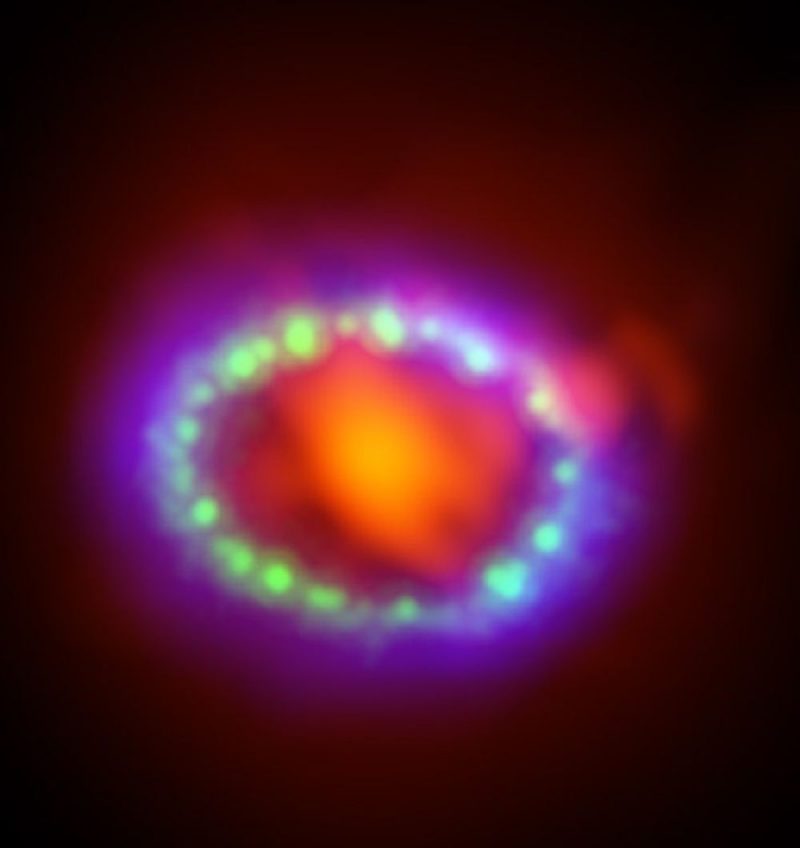 Composite image of Supernova 1987A, via NASA/ ESA/ NRAO.

Source: High Angular Resolution ALMA Images of Dust and Molecules in the SN 1987A Ejecta