The most accurate analog ever found for our sun and and its largest planet, Jupiter. Could there be another Earth in this system, too? 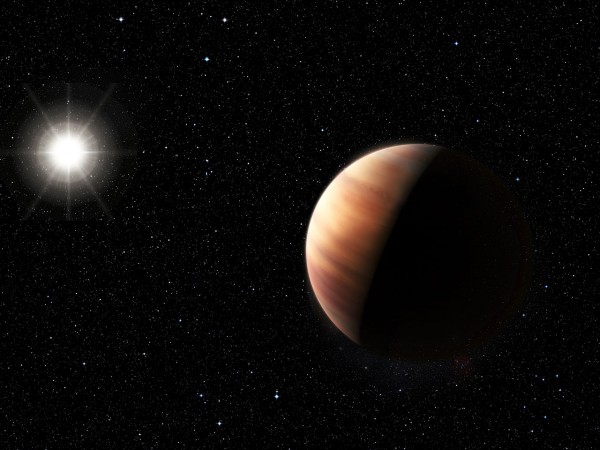 Artist’s impression of a newly discovered Jupiter twin orbiting a twin star to our sun, HIP 11915. The Jupiter-mass planet orbits at the same distance from its star as our Jupiter does from our sun. Is there an as-yet-unseen system of planets orbiting HIP 11915, bearing a resemblance to our own solar system? Image via ESO

The quest for a second Earth, sometimes called an Earth 2.0 – and for another solar system like ours, a solar system 2.0 – is one of modern-day astronomy’s most exciting endeavors. Today (July 15, 2015), an international group of astronomers announced that it used ESO’s 3.6-meter telescope at La Silla, on the outskirts of Chile’s Atacama Desert, to identify a planet “just like Jupiter” orbiting at Jupiter’s distance from a sunlike star.

The discovery is causing speculation among astronomers that this star might be central to a solar system like ours, perhaps with a world like our Earth.

Current theories suggest that Jupiter-mass planets play an important role in shaping planetary systems. That’s one reason a Jupiter-mass planet in a Jupiter-like orbit around the sunlike star HIP 11915 is so intriguing. Might this large, distant world have driven the formation of a system of planets around HIP 11915 similar to our solar system?

Perhaps even more intriguing, HIP 11915 is about the same age as our sun. And its sunlike composition suggests that there may be rocky planets orbiting closer to the star.

This object is not the only Jupiter twin ever found, by the way. Another one orbits the star HD 154345.

Jorge Melendez, of the Universidade de São Paulo, Brazil, led the team and is co-author of their study, which will appear in the journal Astronomy and Astrophysics. The team found the planet by measuring the slight wobble it imposes on its host star in the course of their mutual orbit. A statement from ESO explained:

So far, exoplanet surveys have been most sensitive to planetary systems that are populated in their inner regions by massive planets, down to a few times the mass of the Earth.

This contrasts with our solar system, where there are small rocky planets in the inner regions and gas giants like Jupiter farther out.

According to the most recent theories, the arrangement of our solar system, so conducive to life, was made possible by the presence of Jupiter and the gravitational influence this gas giant exerted on the solar system during its formative years.

It would seem, therefore, that finding a Jupiter twin is an important milestone on the road to finding a planetary system that mirrors our own.

Megan Bedell, from the University of Chicago and lead author of the paper, concluded:

After two decades of hunting for exoplanets, we are finally beginning to see long-period gas giant planets similar to those in our own solar system … this discovery is, in every respect, an exciting sign that other solar systems may be out there waiting to be discovered.

The astronomers say they need to make follow-up observations to confirm and constrain their finding, but HIP 11915 is one of the most promising candidates so far to host a planetary system similar to our own.

Bottom line: The sunlike star HIP 11915 is now known to have a Jupiter-mass planet orbiting at Jupiter’s distance from it. Since massive planets like Jupiter at this location in a solar system are thought to help drive the formation of small, rocky planets, astronomers are speculating that this system might also contain another Earth.