Scientists studying a distant galaxy cluster have discovered the biggest explosion seen in the universe since the Big Bang.

Scientists studying a distant galaxy cluster say they’ve got a new record-holder for the biggest explosion seen in the universe since the Big Bang in which our universe began. The blast is thought to have come from a supermassive black hole at the center of a galaxy – at the heart of a galaxy cluster – hundreds of millions of light-years away. Researchers estimate that the blast released five times more energy than the previous record holder and hundreds of thousands of times more energy than a typical galaxy cluster.

Astrophysicist Melanie Johnston-Hollitt at Curtin University in Perth, Australia, is co-author of a study about the explosion, which was published in The Astrophysical Journal on February 28, 2020. She said the event was extraordinarily energetic:

We’ve seen outbursts in the centers of galaxies before but this one is really, really massive. And we don’t know why it’s so big. But it happened very slowly, like an explosion in slow motion that took place over hundreds of millions of years.

The gargantuan explosion occurred in the Ophiuchus galaxy cluster about 390 million light-years from Earth. Galaxy clusters are the largest structures in the universe held together by gravity, containing thousands of individual galaxies, dark matter, and hot gas. In the center of the Ophiuchus cluster, there is a large galaxy that contains a supermassive black hole. Researchers think that the source of the gigantic eruption is this black hole. The explosion was so powerful, it punched a cavity in the cluster plasma, the super-hot gas surrounding the black hole.

Although black holes are famous for pulling material toward them, they often expel prodigious amounts of material and energy. This happens when matter falling toward the black hole is redirected into jets, or beams, that blast outward into space and slam into any surrounding material. 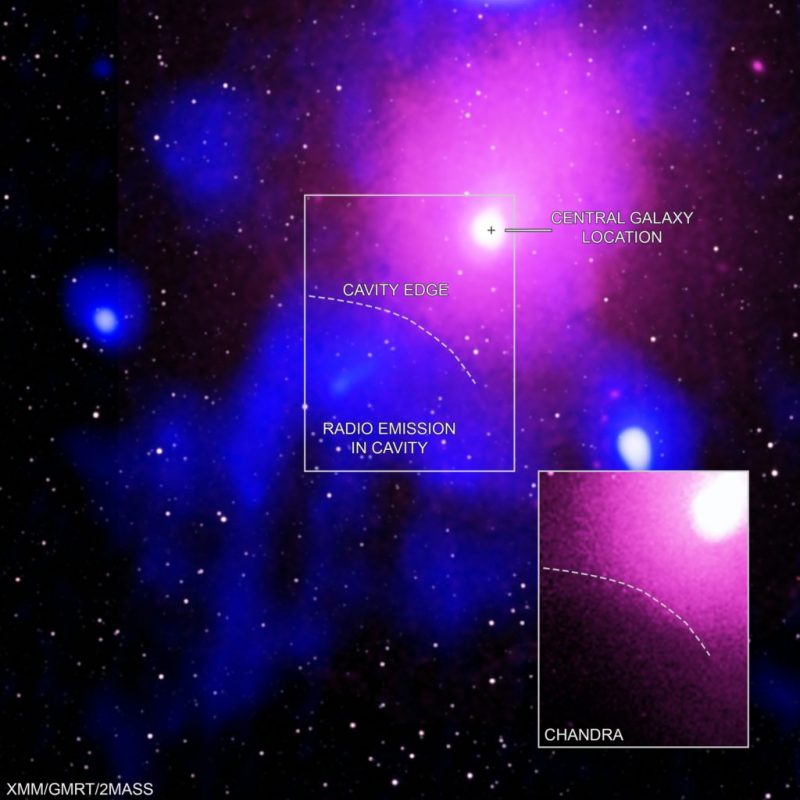 Two space-based X-ray telescopes (Chandra and XMM-Newton) and 2 ground-based radio telescopes (the Murchison Widefield Array in Australia and Giant Metrewave Telescope in India) worked together to provide the data on what’s now considered the universe’s largest known explosion. The explosion blasted out jets and carved a large cavity in hot gas surrounding a supermassive black hole. Read more about this image. Image via NASA.

Study lead author Simona Giacintucci, of the Naval Research Laboratory in Washington, D.C., said the blast was similar to the 1980 eruption of Mount St. Helens, which ripped the top off the mountain. She said in a statement:

The difference is that you could fit 15 Milky Way galaxies in a row into the crater this eruption punched into the cluster’s hot gas.

Astronomers made this discovery using X-ray data from NASA’s Chandra X-ray Observatory and ESA’s XMM-Newton, and radio data from the Murchison Widefield Array (MWA) in Australia and the Giant Metrewave Radio Telescope (GMRT) in India.

Johnston-Hollitt said the cavity in the cluster plasma had been seen previously with X-ray telescopes, but scientists initially dismissed the idea that it could have been caused by an energetic outburst, because it would have been too big. She said:

People were skeptical because the size of outburst. But it really is that. The universe is a weird place.

The researchers only realized what they had discovered when they looked at the Ophiuchus galaxy cluster with radio telescopes. Maxim Markevitch, from NASA’s Goddard Space Flight Center. is a study co-author. He said:

The radio data fit inside the X-rays like a hand in a glove This is the clincher that tells us an eruption of unprecedented size occurred here.

Read more about the discovery here.

The Murchison Widefield Array (MWA) is a low frequency radio telescope in Australia. Image via ICRAR.

Bottom line: Astronomers studying a distant galaxy cluster have discovered the biggest explosion seen in the universe since the Big Bang.

Source: Discovery of a giant radio fossil in the Ophiuchus galaxy cluster