The new planet – designated HD 95086 b – has a predicted mass of only four to five times that of Jupiter.

Astronomers have confirmed the existence of 889 planets orbiting distant stars (as of May 31, 2013). But have we seen these planets directly? In most cases, no. Almost all were found using indirect methods that could detect the effects of the planets on their parent stars. So far, astronomers have directly observed only a dozen exoplanets. The image below shows the lightest one imaged so far, announced by the European Southern Observatory (ESO) on June 3, 2013. The blue circle in the image below is the size of the orbit of Neptune – 8th planet from the sun in our solar system. The star in the center is HD 95086, located about 300 light-years away. The likely planet appears as a faint but clear dot close to the star.

The brightness of the new planet – which has been designated HD 95086 b – indicates that it has a predicted mass of only four to five times that of Jupiter. 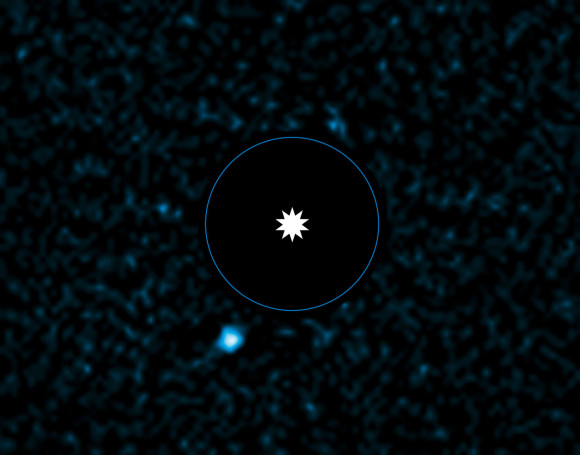 Astronomers using ESO’s Very Large Telescope have acquired an image of a faint object moving near a bright star. With an estimated mass of four to five times that of Jupiter, it would be the least massive planet to be directly observed outside the solar system. In this image, the star itself has been removed – but its location is marked. The exoplanet is the bluish object located at about 7 o’clock. Image via ESO.

The team made the discovery using NACO, an adaptive optics instrument mounted on one of the 8.2-meter Unit Telescopes of ESO’s Very Large Telescope (VLT). This instrument allows astronomers to remove most of the blurring effects of the atmosphere and obtain very sharp images.

The newly discovered planet orbits the star HD 95086 at a distance of around 56 times the distance from the Earth to the sun, and twice the sun–Neptune distance. The star itself is a little more massive than the sun and is surrounded by a debris disc. HD 95086 is a very young star, in contrast to our sun. It’s that is probably only 10 million to 17 million years old, while our sun is an estimated 4.5 billion years old.

Astronomers believe this new planet probably formed within the gaseous and dusty disc that surrounds HD 95086. Astronomer Anne-Marie Lagrange, a member of the discovery team, said:

Its current location raises questions about its formation process. It either grew by assembling the rocks that form the solid core and then slowly accumulated gas from the environment to form the heavy atmosphere, or started forming from a gaseous clump that arose from gravitational instabilities in the disc.

Interactions between the planet and the disc itself or with other planets may have also moved the planet from where it was born.

The brightness of the star gives HD 95086 b an estimated surface temperature of about 700 degrees Celsius. This is cool enough for water vapour and possibly methane to exist in its atmosphere.

Bottom line: Astronomers using the 8.2-meter Unit Telescopes of ESO’s Very Large Telescope (VLT) have captured an image of what they believe is the lightest exoplanet imaged so far.

Image and story via ESO