New images from ESO’s Very Large Telescope show that asteroid Hygiea is round, meaning that it may now be classified as the smallest-known dwarf planet in our solar system. 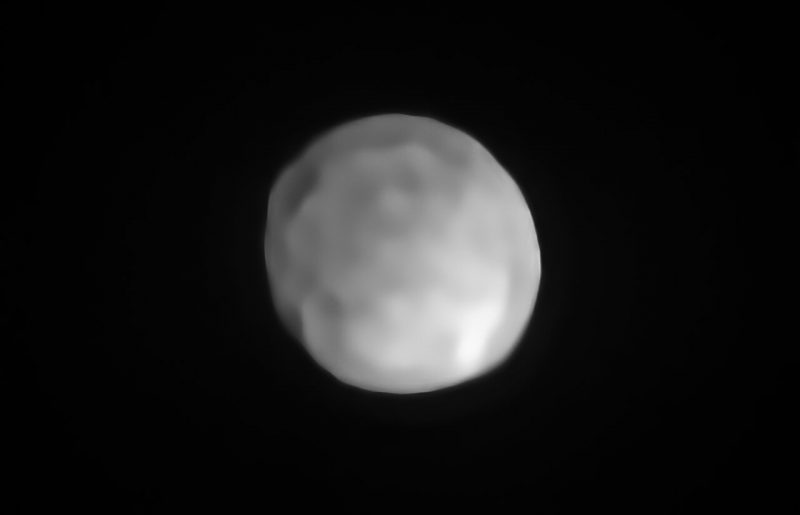 This is the best view yet of asteroid Hygiea in the main asteroid belt, from ESO’s Very Large Telescope (VLT). Hygiea is now seen to be nearly spherical, meaning it could possibly be classified as a dwarf planet. Image via ESO/P. Vernazza et al./MISTRAL algorithm (ONERA/CNRS).

Hygiea is the fourth largest object in the main asteroid belt between Mars and Jupiter, after Ceres (which is also counted as an asteroid), Vesta and Pallas. However, new observations from the European Southern Observatory’s (ESO) Very Large Telescope (VLT) – using the SPHERE instrument – suggest that it should be classified as a dwarf planet. The new peer-reviewed results were published on October 28, 2019, in Nature Astronomy. SPHERE is used primarily for taking images of larger exoplanets around other stars.

Hygiea was already known to have three of the four characteristics of dwarf planets: it orbits the sun, is not a moon and has not cleared its orbit of other rocky debris. But the fourth requirement was still unknown: its shape. Was it massive enough to be roughly spherical? If so, then it would fulfill all the criteria to be considered a dwarf planet. 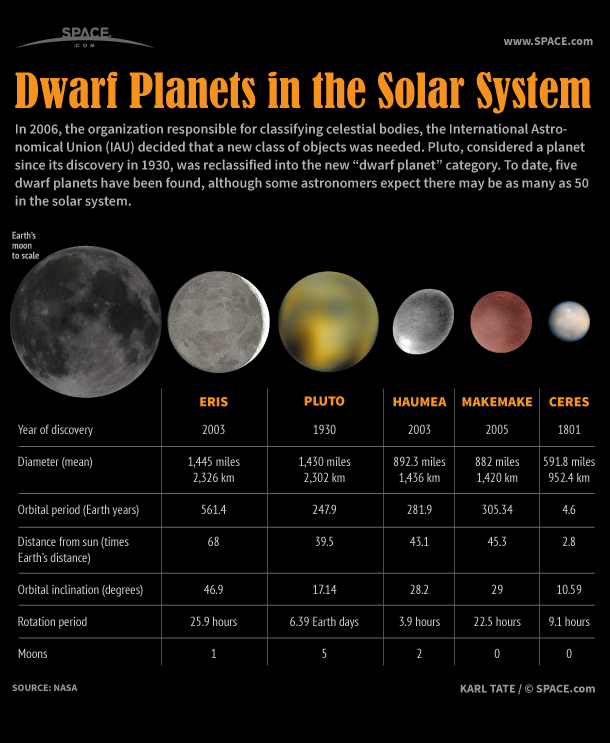 Comparison of the five currently classified dwarf planets with the moon. Could Hygiea now be the sixth largest (and smallest) dwarf planet? Image via Karl Tate/SPACE.com.

Now, thanks to VLT, we finally know the shape of Hygiea, and it is nearly spherical. According to Pierre Vernazza from the Laboratoire d’Astrophysique de Marseille in France:

Thanks to the unique capability of the SPHERE instrument on the VLT, which is one of the most powerful imaging systems in the world, we could resolve Hygiea’s shape, which turns out to be nearly spherical. Thanks to these images, Hygiea may be reclassified as a dwarf planet, so far the smallest in the solar system.

Not only was VLT able to see Hygiea’s shape for the first time, it also provided better measurements as to its size, which turns out to be just over 267 miles (430 km). That would make it the sixth largest (and smallest) dwarf planet, smaller than Ceres, which is about 592 miles (952 km) in size.

Whether Hygiea actually will be classified as a dwarf planet remains to be seen, but there certainly seems to be a good case now for doing so.

The new observations also revealed another surprise: no sign of the very large impact crater that had been expected. Since Hygiea is part of one of the main asteroid families in the asteroid belt – nearly 7,000 objects all originating from the same parent body – scientists thought it would have a large, deep collision mark, but it didn’t. Vernazza said:

This result came as a real surprise as we were expecting the presence of a large impact basin, as is the case on Vesta.

About 95% of Hygiea’s surface was visible during the observations, but no massive impact crater was seen, only two smaller craters. As study co-author Miroslav Brož of the Astronomical Institute of Charles University in Prague, Czech Republic, explained:

Neither of these two craters could have been caused by the impact that originated the Hygiea family of asteroids whose volume is comparable to that of a 100 km-sized object. They are too small.

The researchers decided to investigate further. They concluded that both Hygiea’s shape and the large family of asteroids it is part of, are the result of a major collision with a large rocky object, between 75 and 150 km diameter, with the former parent body, about 2 billion years ago. According to Pavel Sevecek, a Ph.D. student at the Astronomical Institute of Charles University:

Such a collision between two large bodies in the asteroid belt is unique in the last 3-4 billion years.

Numerical simulations of the family forming event show that Hygiea’s spherical shape and family can be explained by a collision with a large projectile (Diameter~75-150 km). By comparing Hygiea’s sphericity with that of other solar system objects, it appears that Hygiea is nearly as spherical as Ceres, opening a possibility for this object to be reclassified as a dwarf planet.

Thanks to advances like VLT’s SPHERE instrument, scientists are now getting better views of main belt asteroids in general, apart from just Hygiea, as Vernazza noted:

Thanks to the VLT and the new generation adaptive-optics instrument SPHERE, we are now imaging main belt asteroids with unprecedented resolution, closing the gap between Earth-based and interplanetary mission observations. 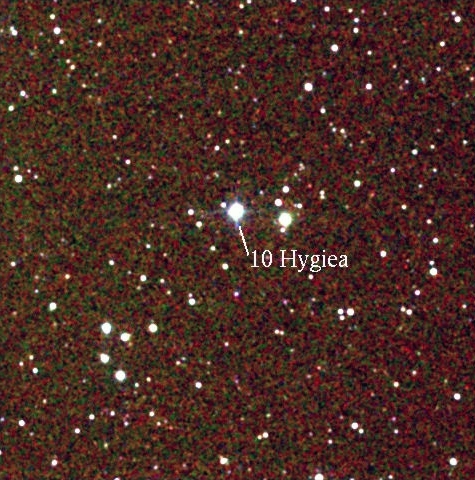 In previous views of Hygiea, the object just looked like a very bright star. Image via 2MASS Survey/Wikipedia.

If Hygiea is classified as a dwarf planet – which will now likely face some debate – it will join a small but fascinating group of objects that are more evolved than asteroids but didn’t quite make the cut for full planethood.

Bottom line: Astronomers have found that Hygiea, an asteroid in the main asteroid belt, is round, which may mean it now can be classified as the smallest-known dwarf planet in the solar system.

Source: A basin-free spherical shape as outcome of a giant impact on asteroid Hygiea