Astronomers did know in advance that asteroid 2016 FW13 would pass closely – but safely – on April 5, 2016. Check out a photo from the Virtual Telescope Project. 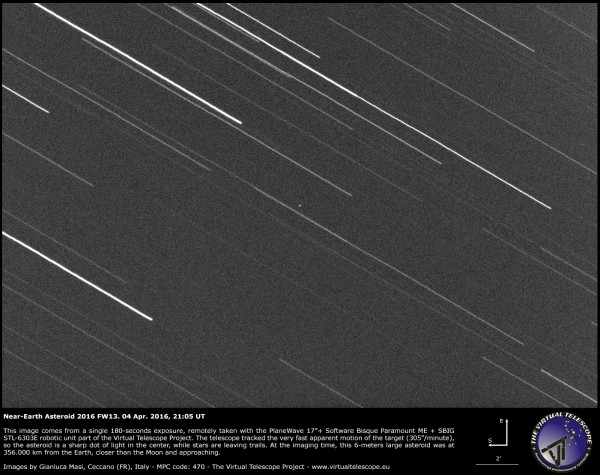 On April 5, 2016, at 02:21 UTC), a 6-meter-large near-Earth asteroid labeled 2016 FW13 made an extremely close, but safe, sweep past the Earth. Astronomers knew in advance that the asteroid would come within 200,000 miles (320,000 km) of Earth – inside the moon’s orbit. Gianluca Masi at the Virtual Telescope Project sent this photo to EarthSky. He wrote on his website:

At Virtual Telescope, we tried to grab it, despite the uncertain weather and hazy sky.

The image above is a single 180-seconds exposure, remotely taken with PlaneWave 17?+Paramount ME+SBIG STL-6303E robotic unit part of the Virtual Telescope. The robotic mount tracked the VERY fast (305″/minute) apparent motion of the asteroid, so stars are trailing, while the asteroid is perfectly tracked (the minor planet is the little sharp dot in the center).

At the imaging time, the object was at about magnitude 18.5 [ed.note: much too faint to be viewed with the eye] and at about 220,000 miles (356,000 km) from our planet. This is, once again, a super result, showing the amazing capabilities of the Virtual Telescope in tracking extremely demanding asteroids.

And it’s also good news for us earthlings who are depending on astronomers to locate asteroids, which, everyone now agrees, have the potential to be a threat to Earth.

Astronomers do now have confidence they know the whereabouts of all the big ones, and that no large asteroid is headed our way anytime soon, but these little ones often elude us.

The estimated size of asteroid 2016 FW13 (about 20 feet or 6 meters) is in contrast to the much-larger estimated size of the Chelyabinsk meteor that entered Earth’s atmosphere over Russia in February, 2013. Its shock wave broke windows in six Russian cities and caused some 1,500 people to seek medical treatment, mostly for injuries related to flying glass. The Chelyabinsk meteor was estimated at 65 feet (about 20 meters) wide.

Astronomers didn’t see it in advance because it came from the direction of the sun.

Bottom line: Photo from the Virtual Telescope Project of asteroid 2016 FW13, which swept within the moon’s distance on April 5, 2016.