Asteroids are chunks of rock or metal – most likely debris left over from the formation of our solar system – and they sweep past Earth all the time. Little ones enter our atmosphere fairly frequently. But fast-moving asteroid 2002 AJ129 – which will pass close to Earth this Super Bowl Sunday, February 4, 2018 – is making a bigger stir than some because it’s a relatively big one, somewhere between 0.3 miles (0.5 km) and 0.75 miles (1.2 km) across. Its closest approach to Earth will be at 21:30 UTC (4:30 p.m. EST) on February 4; translate to your time zone. For sure, the Super Bowl will make a bigger splash than asteroid 2002 AJ129, however. At its closest, the asteroid will be no closer than 10 times the moon’s distance (about 2.6 million miles, or 4.2 million km).

This asteroid is a particularly fast-moving one. Its velocity at the time of closest approach will be 76,000 mph (34 km per second), higher than the majority of near-Earth objects during an Earth flyby. NASA said the high flyby velocity is a result of the asteroid’s orbit, which approaches very close to the sun – 11 million miles (18 million km).

This image comes from 3 90-second exposures, unfiltered, taken at Tenagra Observatory in Arizona on February 3, 2018. A robotic mount tracked the fast apparent motion of the asteroid, so stars are apparently trailing. The asteroid is the sharp dot in the center, marked with two red lines. Image via Virtual Telescope Project.

Astronomers will be following this object, which is categorized as a Potentially Hazardous Asteroid (PHA). They’ve been following it for 14 years. Paul Chodas is manager of NASA’s Center for Near-Earth Object Studies at the Jet Propulsion Laboratory, Pasadena, California. He said in a statement from NASA:

We … know its orbit very accurately. Our calculations indicate that asteroid 2002 AJ129 has no chance — zero — of colliding with Earth on February 4 or any time over the next 100 years.

You can see asteroid 2002 AJ129, too. The Virtual Telescope Project has scheduled two livefeeds:

Translate to your time zone

Visit Virtual Telescope Project’s livefeed page for the February 4 pass of this asteroid. 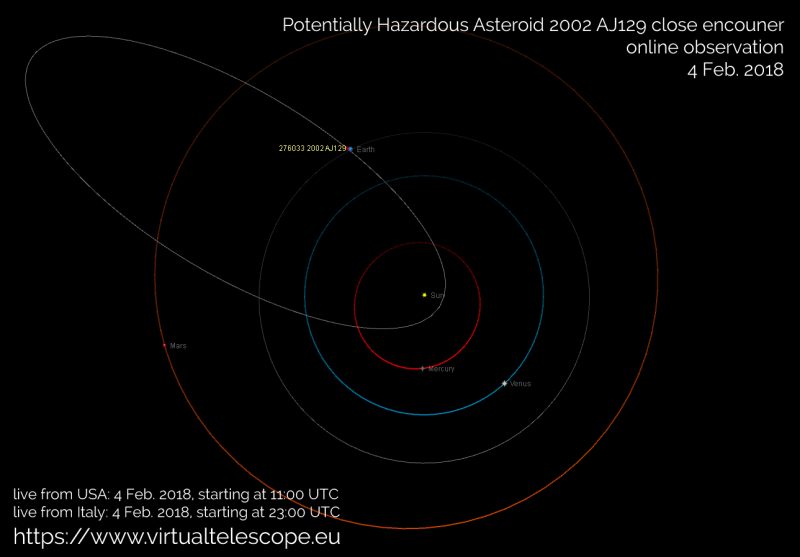 Astronomers discovered 2002 AJ129 on January 15, 2002. It was picked up by the former NASA-sponsored Near Earth Asteroid Tracking project at the Maui Space Surveillance Site on Haleakala, Hawaii.