It’s sometimes said that, on a worldwide scale, solar eclipses outnumber lunar eclipses by about a three to two margin. True?

There are several lunar and solar eclipses in the course of every year. Which are more common? That depends on what types of lunar eclipses you decide to include in the final tally.

Let’s define terms. A total solar eclipse happens when the moon passes in front of the sun – like the one coming up on March 8-9, 2016 – blotting it from view.

A penumbral lunar eclipse is a very subtle kind of eclipse. Here’s how it happens. There are two parts to Earth’s shadow: a dark inner umbra and a lighter outer penumbra. And so there are two kinds of lunar eclipse: umbral and penumbral. A penumbral eclipse happens when Earth’s lighter outer shadow brushes the moon’s face. Some people say they can’t perceive a penumbral eclipse even as it’s happening. From the moon, the eclipse would be much more obvious, for you would see the Earth partially eclipsing or blocking out the sun. In fact, when you’re watching a partial solar eclipse from Earth, you’re standing in the moon’s penumbral shadow.

By the way, all solar eclipses happen at new moon, when the moon passes more or less between the Earth and sun. During a total solar eclipse, a rim of twilight encircles your entire horizon, the sky turns dark and stars pop into view. Meanwhile, in the sky, the sun’s fiery corona can be seen surrounding the dark orb – the moon – that is completely covering the sun.

All lunar eclipses happen at full moon, when Earth’s dark shadow totally or partially covers the moon. They are less dramatic than solar eclipses, but no less wonderful. You see Earth’s shadow on the moon’s face as a dark ‘bite’ taken out of the moon. This darkness creeps across the moon’s face during the several hours of the eclipse. 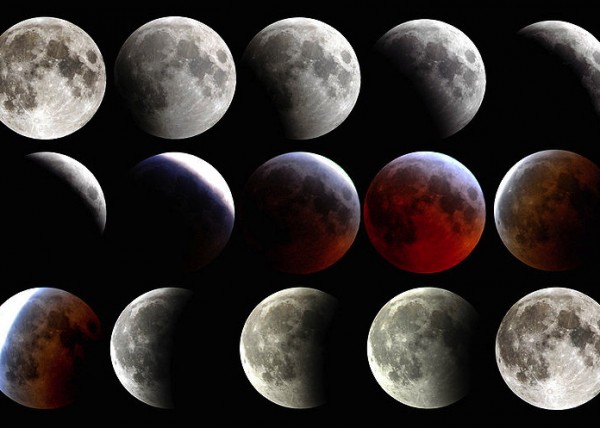 Why isn’t there an eclipse at every full moon?