Are the same percentages of stars with gargantuan mass, low mass and intermediate mass born everywhere throughout space? 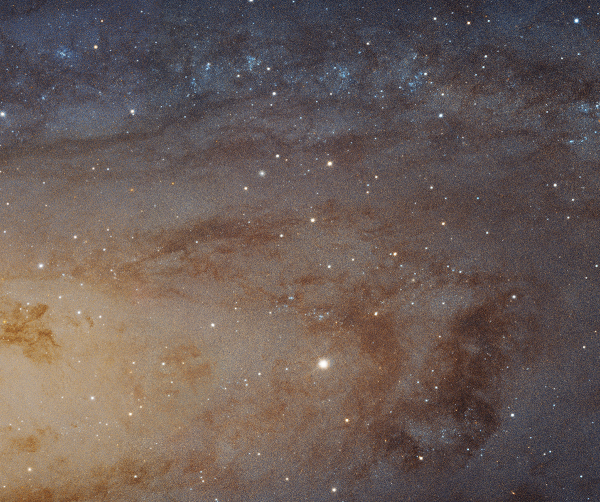 This image is part of a sweeping Hubble Space Telescope mosaic of the galaxy next door, the Andromeda galaxy, or M31. The mosaic has now been used to understand the mass distribution of newly born stars in this galaxy.

We humans are born with particular characteristics, perhaps intelligence or blond hair or a lovely singing voice. But, for stars, the most important characteristic is mass, or how much matter the star contains. Stars can vary in mass by a factor of over 1,000, and those differences in mass determine the lifespan and destiny of a star. Astronomers have wanted to understand more about the process by which stars of various masses are born. For example, are the same percentages of stars with gargantuan mass, low mass and intermediate mass born everywhere throughout space? Now – using an amazing mosaic image of the neighboring Andromeda galaxy, which was released in early 2015 – a team consisting of both professional astronomers and citizen scientists have found that our own Milky Way galaxy and the Andromeda galaxy have a similar percentage of newborn stars with respect to mass.

The square image at top is just a tiny portion of the Hubble Space Telescope panoramic mosaic image of the Andromeda galaxy, which lies 2.5 million light-years away. The whole image has a staggering 1.5 billion pixels, meaning you would need more than 600 HD television screens to display it.

Here’s another tiny version of the panorama, below:

View larger. | View zoomable image. | A portion of the Andromeda galaxy via NASA/ESA. This image from the Panchromatic Hubble Andromeda Treasury (PHAT) program is too large to be easily displayed at full resolution and is best appreciated using the zoom tool here here.

The panorama traces the Andromeda galaxy from its central galactic bulge, where stars are densely packed together, across lanes of stars and dust to the sparser outskirts of its outer disc on the right. The large groups of blue stars in the galaxy indicate the locations of star clusters and star-forming regions in the spiral arms.

Astronomers now say there are 2,753 star clusters visible in the entire Andromeda panorama. Professional astronomers and citizen scientists have learned that, for whatever reason, nature apparently cooks up stars “like batches of cookies,” with a consistent distribution from massive stars to small stars. A statement from the Hubble Space Telescope said:

It is surprising to find that this ratio is the same across our neighboring galaxy (as well as inside our stellar neighborhood in the Milky Way), given the complex physics of star formation. 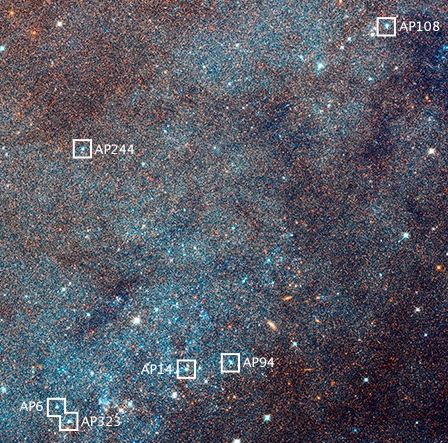 Here you see myriad stars and numerous open star clusters in the Andromeda galaxy as bright blue knots. The view is 4,400 light-years across.

Astronomers use the term Initial Mass Function (IMF) to describe the percentage of stars with a particular mass within a star-forming cluster. If they can pin down the IMF, they say, they can then interpret the light from distant galaxies more clearly, and understand the formation history of stars in our universe.

Measuring the IMF was the primary driver behind Hubble’s ambitious panoramic survey of the Andromeda galaxy, which officially is called the Panchromatic Hubble Andromeda Treasury (PHAT). Nearly 8,000 images of 117 million stars in the galaxy’s disk were obtained from viewing Andromeda in near-ultraviolet, visible, and near-infrared wavelengths.

Prior to Hubble’s landmark survey of the Andromeda galaxy, astronomers only had IMF measurements made in the local stellar neighborhood within our own galaxy.

That’s how they learned that the IMF among all the clusters surveyed was very similar, both to each other and to the known IMF from within our Milky Way galaxy. 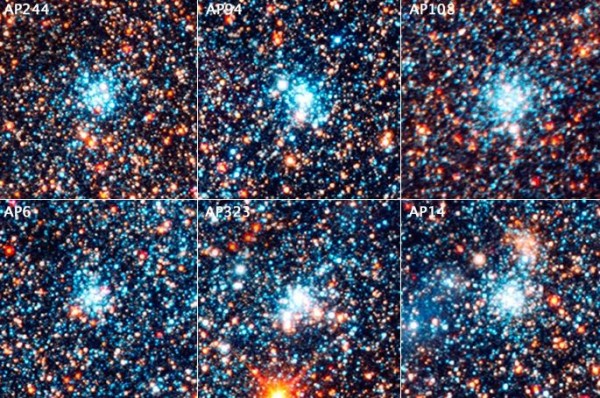 This is a composite image of six bright blue clusters in the Andromeda galaxy. Each cluster square is 150 light-years across. These clusters, and others in Andromeda, showed astronomers that, for whatever reason, nature apparently cooks up stars with a consistent distribution from massive stars to small stars (blue supergiants to red dwarfs).

Over the course of 25 days, the citizen-scientist volunteers submitted 1.82 million individual image classifications (based on how concentrated the stars were, their shapes, and how well the stars stood out from the background), which roughly represents 24 months of constant human attention. Scientists used these classifications to identify a sample of 2,753 star clusters, increasing the number of known clusters by a factor of six in the PHAT survey region.

Daniel Weisz of the University of Washington in Seattle – lead author on a paper that appeared in the June 20 issue of The Astrophysical Journal – said:

Given the sheer volume of Hubble images, our study of the IMF would not have been possible without the help of citizen scientists.

The efforts of these citizen scientists open the door to a variety of new and interesting scientific investigations, including this new measurement of the IMF.

Bottom line: Are the same percentages of stars with gargantuan mass, low mass and intermediate mass born everywhere throughout space? Professional astronomers and citizen scientists recently answered this question, using the Panchromatic Hubble Andromeda Treasury (PHAT) program mosaic of the Andromeda galaxy. They learned that our own Milky Way galaxy and the Andromeda galaxy have a similar percentage of newborn stars with respect to mass.