Researchers explore the voids between superclusters

An analysis of the cosmic microwave background has provided clues about the gas inside vast cosmic voids in space, between giant superclusters of galaxies.

View larger. | The nearest superclusters to Earth, within 500 million light-years. These superclusters are not isolated in space but together with many other smaller concentrations of galaxies they form parts of extensive walls of galaxies surrounding large voids. Three of the biggest walls near us are marked on the map as well as several of the largest voids. Image via AtlasoftheUniverse.com.

According to what astronomers know now, the very early universe was more or less uniform as it expanded outward from the Big Bang. But there were some areas of slightly higher density, and, over time, those areas of higher density became superclusters of galaxies. Now – according to the most recent ideas about what the universe looks like – as we peer at the universe as a whole, it has a honeycomb-like structure, with walls of the honeycomb containing the superclusters of galaxies, and with voids in between. Wikipedia lists the largest known voids here. The voids – the emptier areas – are less well studied than the superclusters, but some are hundreds of millions of light-years across. Astronomers say that the temperatures and pressures of gas in the voids could provide clues to how the universe evolved. David Alonso, of the University of Oxford in the U.K., and colleagues have now taken one of the first steps toward determining these gas properties by analyzing the gas in cosmic voids.

The research was published in the peer-reviewed journal Physical Review D on March 14, 2018.

The cosmic microwave background (CMB) is also part of this story. It’s a remnant left behind from an early stage of the universe, 380,000 years after the Big Bang. A statement from the American Physical Society (APS) explained:

Intergalactic gas boosts the energy of photons from the CMB, and this distortion is a powerful probe of the gas in galaxy clusters.

Until now, no one had used the CMB to study cosmic voids. Alonso’s team combined maps of the CMB with images of 774 voids. The researchers then deduced the properties of the gas within each void by comparing the measured energy of the CMB photons to models of the electron pressure in voids. APS said:

They found that the pressure is lower in voids than the cosmic average. This result is not surprising given that little happens in voids, and it may mean that voids have just passively evolved over the age of the universe.

But there are hints in the data that the gas might be warmer than expected. If this finding holds up to scrutiny, it could be a sign that powerful jets from supermassive black holes are pumping energy into the intergalactic gas and helping to shape the cosmos. 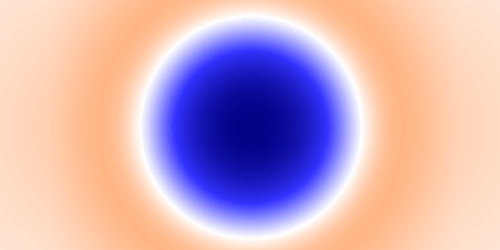 Image via D. Alonso/University of Oxford.

Source: Measurement of the thermal Sunyaev-Zel’dovich effect around cosmic voids