A new planet next door?

Astronomers have spotted “something” near Alpha Centauri A, in the star system nearest our Earth and sun. If it turns out to be a planet, it’ll be the first time a planet has been directly imaged within the habitable zone of a star. 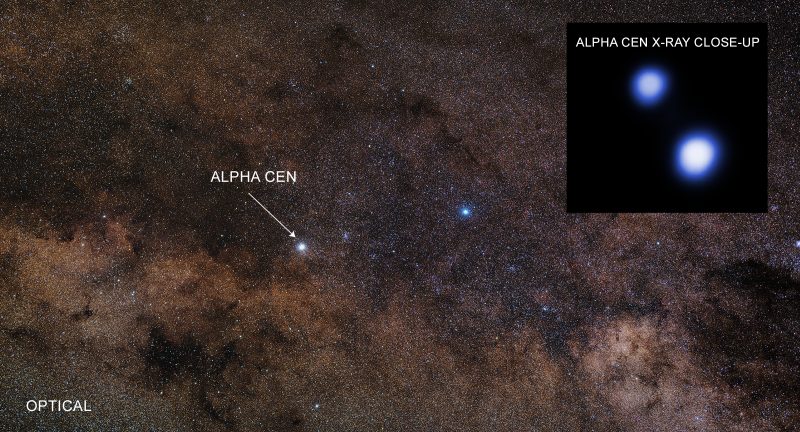 Alpha Centauri is the closest star system to our sun. The inset image shows the two primary stars, A and B (a 3rd star, Proxima, lies some distance away). A new study shows that a planet might lie within the habitable zone of Alpha Centauri A. Images via Zdenek Bardon and NASA/ CXC/ Univ. of Colorado/ T. Ayres et al.

Astronomers have imaged something near the star Alpha Centauri A, in the star system next door to our sun, just 4.4 light-years away. Is it an asteroid, or dust, or an image glitch, or … a planet? If it is a planet, it’s the first known planet to be directly imaged in a star’s habitable zone, the region of a star system in which liquid water can exist and therefore in which life as we know it might occur.

The team of astronomers is calling the object they imaged a “planet candidate.” This team is part of the Near Earths in the Alpha Centauri Region (NEAR) experiment, with the specific goal of imaging low-mass (Earthlike) planets in the habitable zones of stars. The group made the observations in May and June of 2019 and reported them in the journal Nature Communications on February 10, 2021.

The 2021 lunar calendars are here. A few left. Order yours before they’re gone!

Because it’s so relatively nearby (just 26 trillion miles, or 42 trillion km), Alpha Centauri A is a logical target for the search. Alpha Centauri A is one of two large stars in this system, and the two stars – A and B – orbit each other in an approximate Saturn-sized orbit. The stars are similar in size and temperature to our sun. The habitable zone, where liquid water is possible, will be at a similar distance to where Earth’s habitable zone lies.

The astronomers used the Very Large Telescope in Chile to look for planets in the mid-infrared range of the electromagnetic spectrum. Temperate planets similar to Earth shine brightest in this wavelength. But the imaging was still challenging, because at 4.4 light-years away, any planet in the habitable zone of Alpha Centauri A would be just 1 arc second from its home star. So the team compiled 100 hours of observing time to achieve the most sensitive image ever taken of the habitable zone of the Alpha Centauri star system.

With this remarkable improvement in imaging capabilities, the team believes it can detect planets the size of Neptune within the star’s habitable zone. The astronomers’ goal was to see if planets around the habitable zones of stars could be imaged directly, and now they may have already found their first evidence of one. 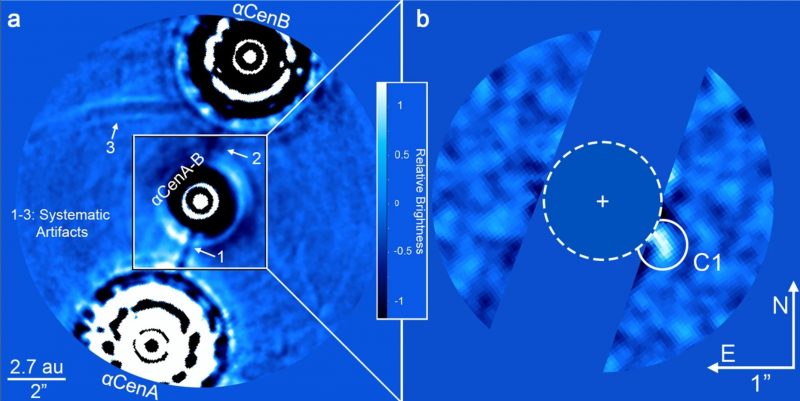 In image b on the right – a zoomed-in image of a on the left – the white dashed circle represents the inner edge of the habitable zone. The bright area labeled C1 is the planet candidate. Image via Nature Communications/ NEAR.

The speck of light they detected is between the size of Neptune and Saturn and lies about 1 astronomical unit, or the distance between Earth and the sun, away from its own star. The astronomers know that the planet candidate could turn out to be something as uneventful as a defect or artifact in the data, but they are excited at the possibility that they may have found one in their test to see if it could even be done. They also hope to soon be able to image smaller planets, closer to Earth’s size.

Team member Kevin Wagner of the University of Arizona posted the video below, which provides a summary of the NEAR experiment’s ambitions and the methods it used to find the candidate planet.

Their findings will have to be confirmed before any definitive proclamation of a new planet can be made.

At least 50 planets around other stars have been directly imaged, just none in this “Goldilocks” habitable zone close (but not too close) to its home star. The same telescope used in this study also made the first-ever image of an exoplanet in 2004, when a speck was seen around a brown dwarf. Last year the telescope spotted the first ever multiple-planet system around a star.

Up until now, direct imaging has worked best for planets that are very far from their parent stars. It’s also been easier to see planets that don’t pass in front of or behind the star from our point of view. The new mid-infrared imaging method may change that and open up new avenues to finding planets that could support water and life.

Bottom line: Astronomers may have directly imaged the first-ever planet within the habitable zone of a star. The star is Alpha Centauri A, just 4.4 light-years away, in the star system nearest our sun.