The Space Telescope’s sharp imaging provided detail on activity from active asteroid Gault, which is now known to be spinning on its axis so fast that material on its surface at times flies off into space. 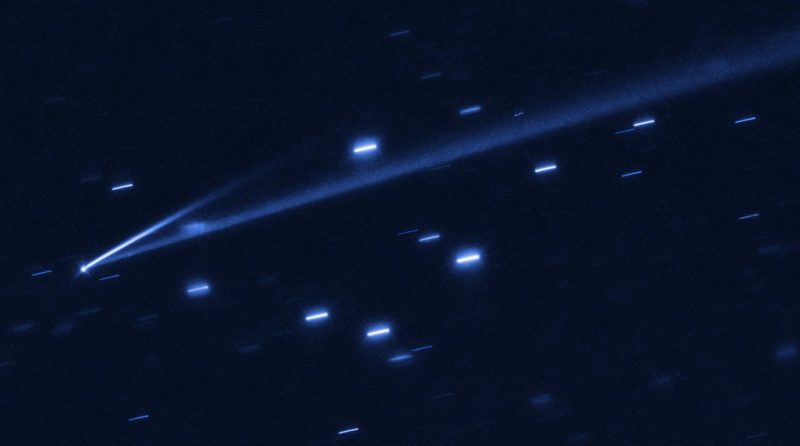 Asteroids are typically solid rocky or metallic bodies; comets are fragile, icy bodies that sometimes sprout tails when they come near the sun. But some asteroids have been found to appear comet-like, in that they also have tails. Scientists said on March 28, 2019, that they used the Hubble Space Telescope to observe such an asteroid, called 6478 Gault. Clear images from the telescope provided researchers with new insight into this asteroid’s unusual past, they said. They now believe that Gault is self-destructing slowly, which is the reason for its two narrow, comet-like tails of debris. Each tail is evidence of an active event that released material into space. Why is it self-destructing? The reason is thought to be its unusually fast spin on its axis.

The team’s results have been accepted for publication in the peer-reviewed Astrophysical Journal Letters (preprint here).

Astronomers have known about asteroid Gault for some time. It was discovered in 1988. The object is 2.5 to 5.5 miles (4 to 9 km) wide, and it’s located in the main asteroid belt, between the orbits of Mars and Jupiter. Astronomers said in a statement:

… the recent observation of two debris tails is the first indication of the asteroid’s instability. This asteroid is one of only a handful to be caught disintegrating by a process known as a YORP torque. When sunlight heats an asteroid, the infrared radiation that escapes from its warmed surface carries off both heat and momentum. This creates a small force that can cause the asteroid to spin faster.

If this centrifugal force eventually overcomes gravity, the asteroid becomes unstable. Landslides on the object can release rubble and dust into space, leaving behind a tail of debris, as seen here with asteroid Gault.

Astronomers estimate that among the 800,000 known asteroids that occupy the asteroid belt between Mars and Jupiter, YORP disruptions occur roughly once per year. From the Hubble observations, researchers inferred that the release of material from the asteroid took place in short episodes lasting from a few hours to a couple of days. They commented:

The direct observation of this activity by the Hubble Space Telescope has provided [us] with a special opportunity to study the composition of asteroids. By researching the material that this unstable asteroid releases into space, [we] can get a glimpse into the history of planet formation in the early ages of the solar system.

Follow-up observations have been made by various ground-based telescopes, and, these astronomers said:

These data were used to deduce a two-hour rotation period for Gault, which is very close to the critical speed at which material will begin to tumble and slide across the asteroid’s surface before drifting off into space.

Astronomer Jan Kleyna of the University of Hawaii – lead author of the new paper – commented:

Gault is the best ‘smoking-gun’ example of a fast rotator right at the two-hour limit. It could have been on the brink of instability for 10 million years. Even a tiny disturbance, like a small impact from a pebble, might have triggered the recent outbursts.

Bottom line: Hubble Space Telescope sharp imaging has provided valuable detail on activity from active asteroid Gault, which is now known to be spinning on its axis so fast – about every two hours – that material on its surface at times flies off into space.

Source: The Sporadic Activity of (6478) Gault: A YORP-driven event?