A week of solar flares at one giant sunspot

The biggest sunspot on the face of the sun in more than two decades erupted on October 26 with its sixth substantial flare in a week. 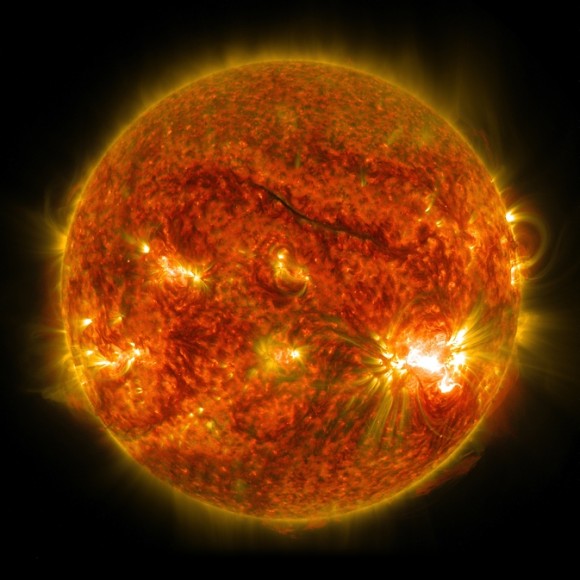 The bright light in the lower right of the sun shows an X-class solar flare on Oct. 26, 2014, as captured by NASA’s SDO. This was the third X-class flare in 48 hours, which erupted from the largest active region seen on the sun in 24 years. Image credit: NASA/SDO

X-class denotes the most intense flares, while the number provides more information about its strength. An X2 is twice as intense as an X1, an X3 is three times as intense, etc. 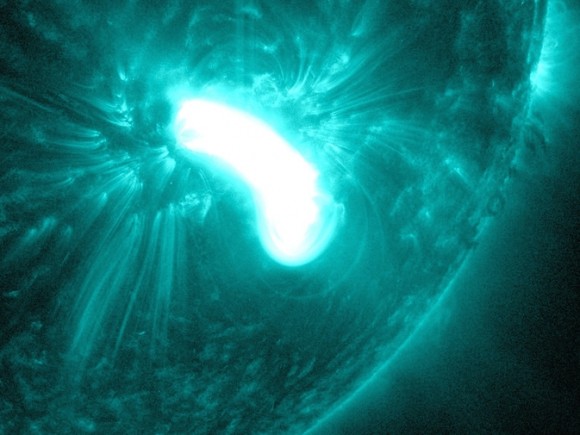 An X-class flare erupted from the sun on Oct. 25, 2014, as seen as a bright flash of light in this image from NASA’s SDO. The image shows extreme ultraviolet light in the 131-angstrom wavelength, which highlights the intensely hot material in a flare and which is typically colorized in teal. Image credit: NASA/SDO

Solar flares are powerful bursts of radiation. Harmful radiation from a flare cannot pass through Earth’s atmosphere to physically affect humans on the ground, however – when intense enough – they can disturb the atmosphere in the layer where GPS and communications signals travel.