Researchers have discovered a giant atmospheric wave-like phenomenon in Venus’ lower atmosphere, unlike anything else seen in the solar system. Evidence shows it has existed since at least 1983, but went completely undetected until now. 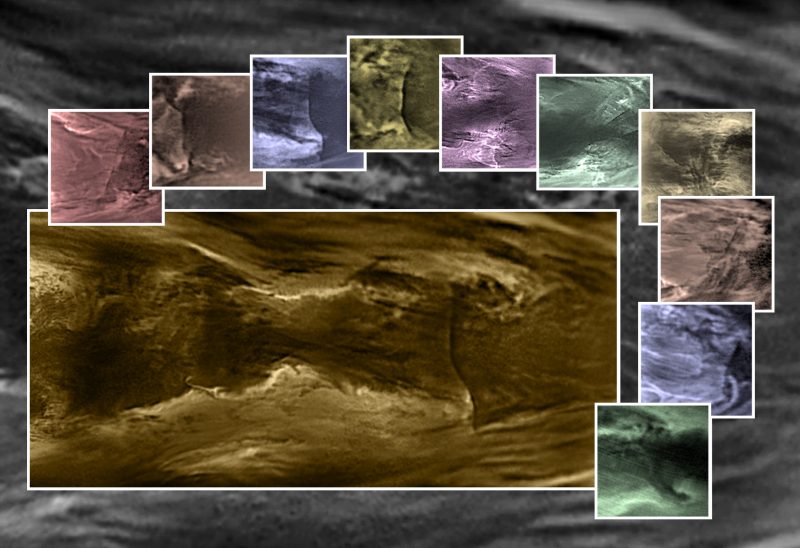 Sequence of infrared images of the lower clouds on Venus, showing a consistent pattern of a planetary-scale cloud discontinuity. This type of giant atmospheric wave has never been before on any other planets in our solar system. Image via Javier Peralta/ JAXA-Planet-C team/ Astrophysics and Space Sciences.

Scientists have announced something new and unexpected: a giant atmospheric “wave” or disruption in Venus’ lower atmosphere. It’s unlike anything else seen in the solar system. The researchers say it has been rapidly moving at about 30 miles (50 km) above the planet’s surface for at least 35 years. It went completely undetected until now.

The amazing discovery is reported in a new peer-reviewed study, published May 27, 2020, in Geophysical Research Letters.

Venus is the planet next-inward to the sun from Earth. It’s completely covered by thick clouds. These clouds are so dense that we can’t peer beneath them to view Venus’ surface. For this reason, the lower atmosphere and surface of Venus have remained largely mysterious. We know the clouds of Venus consist mostly of carbon dioxide, with droplets of sulphuric acid. Strong wind patterns have been observed before in the atmosphere of Venus in ultraviolet and infrared light.

The new atmospheric feature – a giant wall of acidic clouds – is different from previous observations in part because it’s the first huge atmospheric wave found at the lower cloud level in Venus’ atmosphere, at altitudes between 29.5 and 35 miles (47.5 and 56.5 km). This wall of clouds is massive, extending as far as 4,700 miles (7,500 km) across the equator of Venus, from 30 degrees north to 40 degrees south.

According to the researchers, it rotates around the planet in five days, at about 204 miles per hour (328 kph). It’s been doing that since at least 1983.

The Japanese space agency JAXA’s Venus orbiter Akatsuki made the discovery. The phenomenon looked like an atmospheric wave, only much larger than what’s typically seen. It was found by Akatsuki as the spacecraft acquired detailed infrared images of Venus’ nightside, studying the mid and lower layers of the planet’s atmosphere.

Pedro Machado – of the Institute of Astrophysics and Space Sciences, part of the University of Lisbon in Portugal – said in a statement:

If this happened on Earth, this would be a frontal surface at the scale of the planet, and that’s incredible. Under the follow-up campaign, we went back to images I took in the infrared in 2012 with the Galileo National Telescope in the Canary Islands, and we found precisely the same disruption.

The Institute of Astrophysics and Space Sciences has had a long-running research program studying Venus’ winds. It also contributed follow-up observations with NASA’s Infrared Telescope Facility in Hawaii, coordinated with the new observations from Akatsuki.

Huge cloud patterns have been observed before in Venus’ atmosphere, such as the Y wave, a dark Y-shaped structure found in the upper atmosphere that covers nearly the whole planetary disk. It is only visible when observed in ultraviolet light. There is also a 6,200-mile-long (10,000-km-long) bow-shaped stationary wave, also in the upper clouds layers, thought to be caused by the planet’s huge mountain ranges. 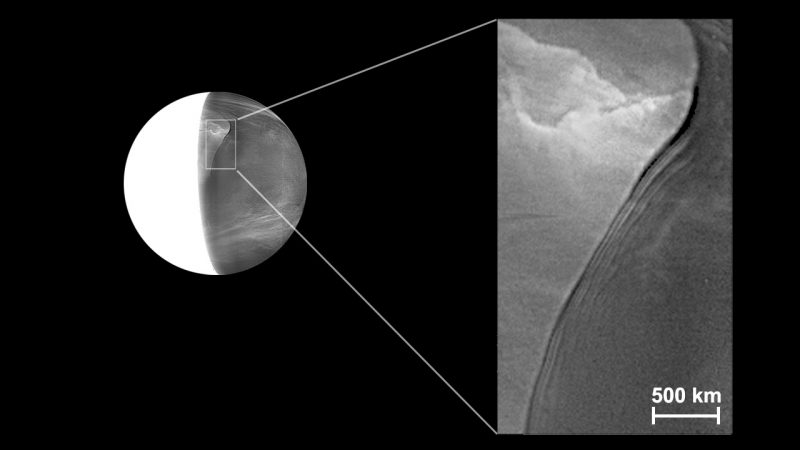 Example of undulations behind the atmospheric discontinuity on the night side of Venus on April 15, 2016. Image via Javier Peralta/ JAXA-Planet C team/ Astrophysics and Space Sciences. 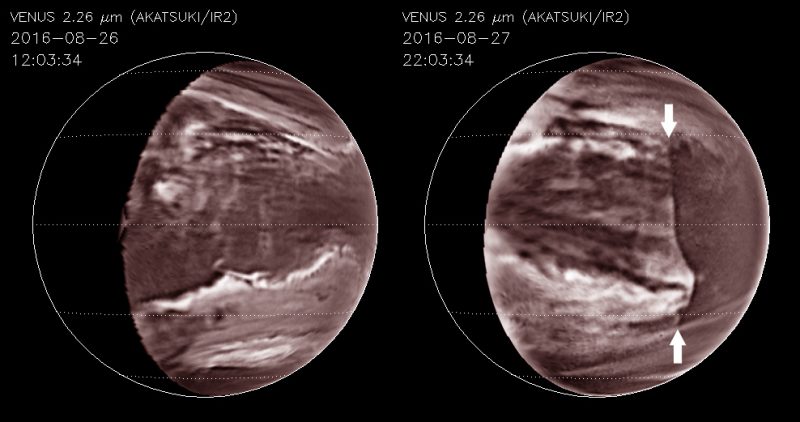 Finding this phenomenon in the lower atmosphere is interesting, not only because it wasn’t noticed before, but also because this region in the atmosphere of Venus is thought to be responsible for the planet’s hellish greenhouse effect. This effect causes the heat of the sun to be retained near Venus’ surface. It keeps the surface at a sizzling temperature of 869 degrees Fahrenheit (465 degrees Celsius), hot enough to melt lead. The dynamics of Venus’ atmosphere are still not well understood overall, so planetary-scale waves such as this might help scientists better understand how the planet’s surface and atmosphere interact.

Since the disruption cannot be observed in the ultraviolet images sensing the top of the clouds at about 43-mile (70-km) height, confirming its wave nature is of critical importance. We would have finally found a wave transporting momentum and energy from the deep atmosphere and dissipating before arriving at the top of the clouds. It would therefore be depositing momentum precisely at the level where we observe the fastest winds of the so-called atmospheric super-rotation of Venus, whose mechanisms have been a long-time mystery. 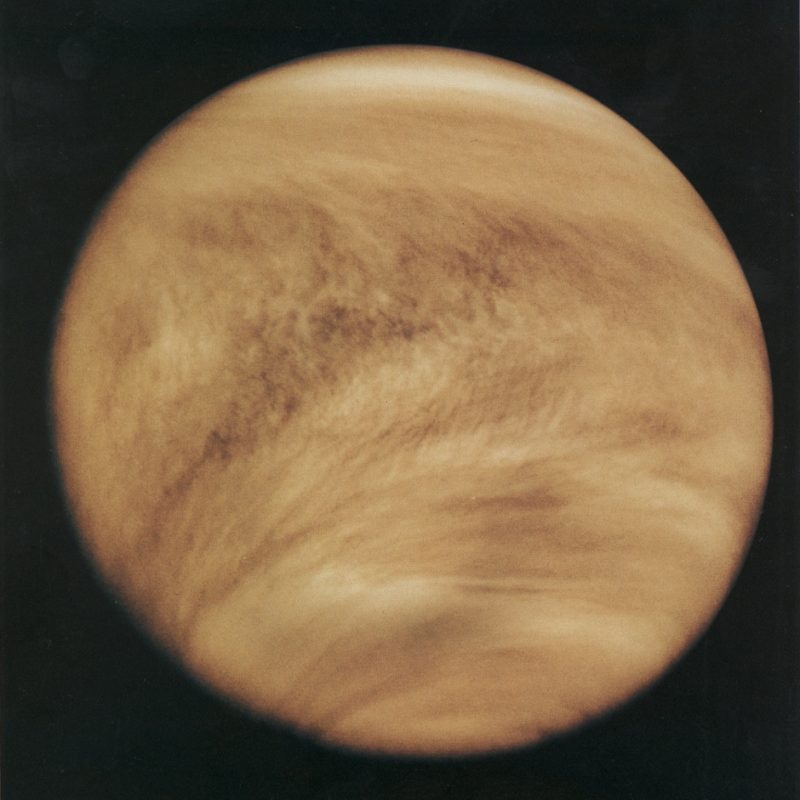 Ultraviolet image of the Y wave in Venus’ upper atmosphere, from the Pioneer Venus Orbiter on February 26, 1979. Image via NASA/ Astronomy Now. 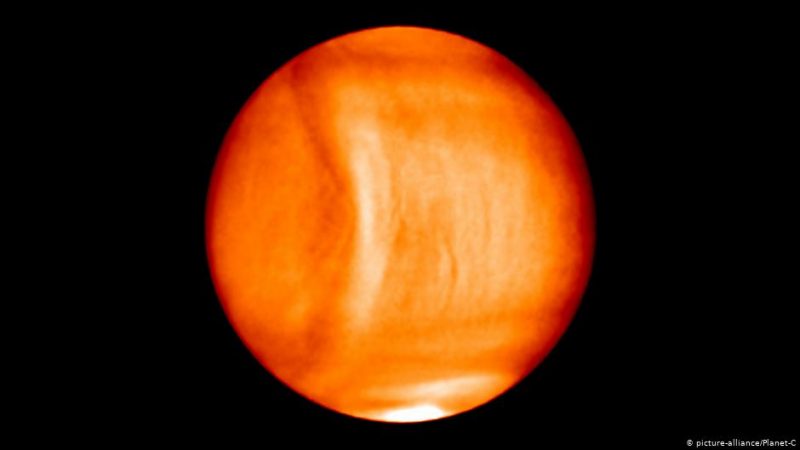 The bow-shaped atmospheric wave in Venus’ upper atmosphere, as seen by Akatsuki in 2015. It is thought to be caused by Venus’ massive mountain ranges. Image via JAXA/ Science Alert. 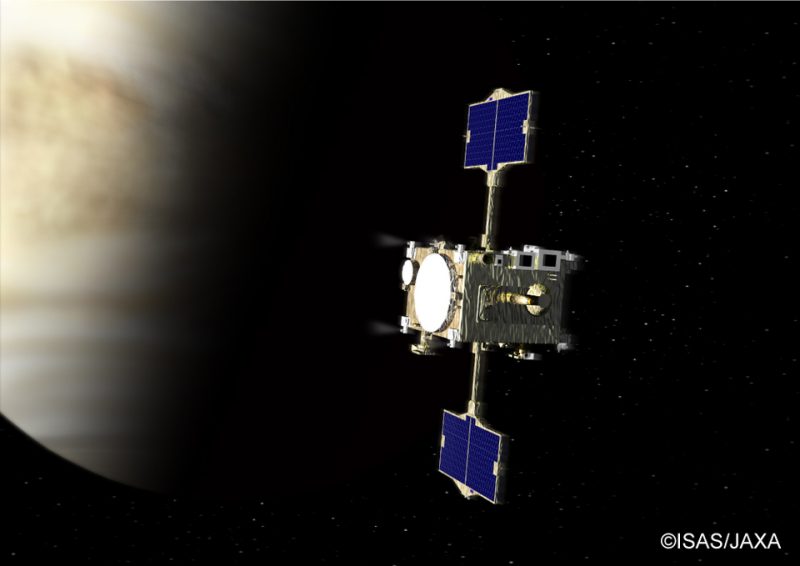 This newly discovered cloud front on Venus is essentially meteorological. Basically, we’re talking here about the weather on Venus. The feature appears to be unique; it’s never been seen before on any other planets in the solar system. It’s therefore difficult to know for certain what is happening, even though the researchers have devised computer simulations to try to mimic the cloud feature. The mechanisms that can create such a giant and long-lasting atmospheric wave are still unknown.

One possibility is that this atmospheric disruption may be a physical manifestation of a type of Kelvin wave, a class of atmospheric gravity wave that shares some important common features with this disruption. Kelvin waves can maintain their shape over long periods of time, and in this case, propagate in the same direction as Venus’ super-rotating winds. Kelvin waves can also interact with other types of atmospheric waves, such as Rossby waves, which naturally occur as a result of the rotation of the planet. Like Kelvin waves, they can be seen in both atmospheres and oceans. On Venus, they may transport energy from the super-rotation of the atmosphere – where the atmosphere rotates faster than the planet itself – to the equator.

The researchers looked at images of Venus going as far back as 1983. They were able to confirm the presence of the same features that were seen by Akatsuki. But how did this particular – and huge – wind formation go unnoticed for so long? According to Machado:

… we needed access to a large, growing and scattered collection of images of Venus gathered in the recent decades with different telescopes. 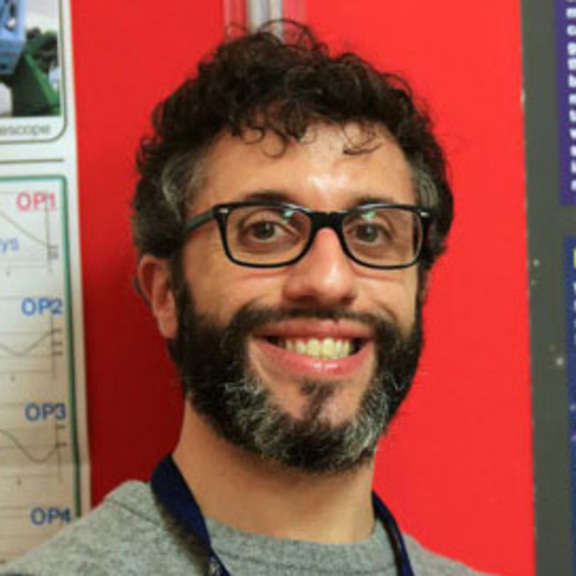 Javier Peralta, a team member of the Akatsuki mission who led the new study. Image via The Planetary Society.

Finding such a large atmospheric phenomenon on Venus, after its being undetected for so long, was a big surprise for scientists. The discovery will help them learn more about the planet’s complex atmosphere and how it interacts with the planet itself.

Bottom line: Researchers have discovered a giant atmospheric wave-like phenomenon in Venus’ lower atmosphere, something not seen anywhere else in the solar system.

Source: A Long-Lived Sharp Disruption on the Lower Clouds of Venus

Via Institute of Astrophysics and Space Sciences

Via Institute of Space and Astronautical Science