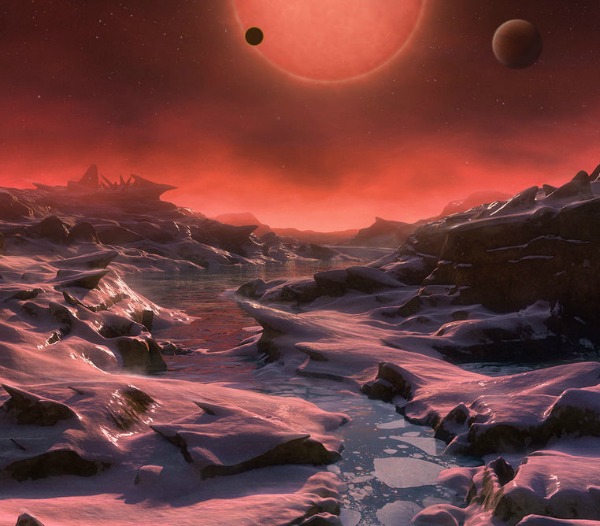 Imagined view from the surface of one of the newly discovered planets, with ultracool dwarf star TRAPPIST-1 in the background. Image credit: ESO/M. Kornmesser

The search for Earth-like planets – and life – beyond the solar system has long been the stuff of science fiction and fantasy. But today’s ground and space telescopes, high-precision instruments and advanced analysis techniques have made this search an active area of real scientific research. Hundreds of terrestrial worlds have been found over the past several years, including a handful at the right distance from their host star to have conditions amenable to liquid water on their rocky surfaces. Astronomers focus on planets in these “habitable zones” in the search for life beyond Earth.

Now for the first time, our international team has found Earth-sized planets around a type of star so extreme it’s referred to as an “ultracool dwarf.” This is the first time planets have been found around the lowest-mass stars, and indicates that they may be the ideal hunting grounds for habitable worlds beyond the solar system. 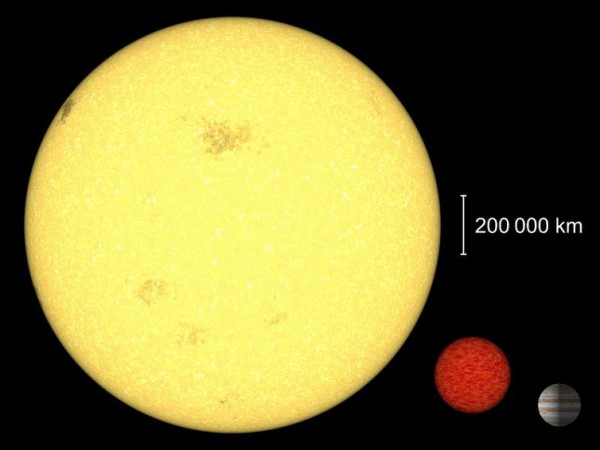 Shifting the focus in the search

Astronomers have recently started focusing their search for Earth-like planets away from bright, sun-like stars to dimmer, cooler, low-mass stars called M dwarfs. These stars, while far more numerous in the Milky Way, are too faint to be seen with the naked eye.

Yet their relatively small diameters – less than one-half the width of the sun – make it easier to detect Earth-sized planets orbiting them using a common technique called the transit method. A transit occurs when a planet passes between us and its host star, resulting in a very slight apparent dimming of the star as the planet blocks a portion of its light.

The alignment of the planet and star must be just right for a transit to be seen, so the probability of this happening is small, and usually only happens if the planet orbits very close to its star. Fortunately, the habitable zone around a cool M dwarf is also closer in than it is around a hotter sun-like star, so transiting Earth-like planets in these systems have a greater chance of having the conditions necessary for liquid water on their surfaces.

Unfortunately, the feeble amount of light emitted by M dwarfs restricts the search for planetary transits to those stars closest to the sun, and requires larger telescopes.

TRAPPIST-1 and its planets

It is a technical and scientific feat, then, that our international team of astronomers has found the first Earth-like planets around one of the coolest and smallest M dwarfs near the sun. These “ultracool dwarf” stars are a mere tenth of the diameter of the sun and 2,000 times fainter. 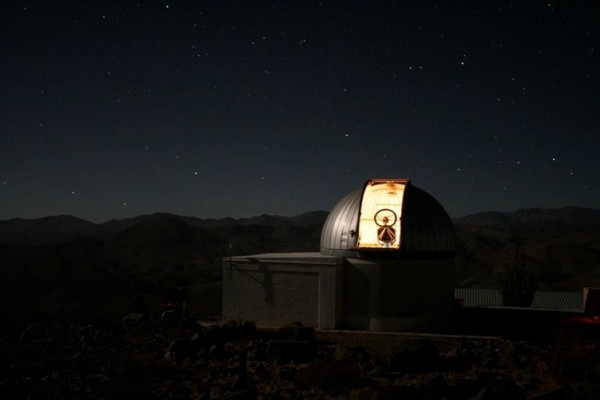 The planets were found by the transit method, using a facility called TRAPPIST (TRAnsiting Planets and PlanetesImals Small Telescope), a 60-cm telescope at La Silla Observatory in Chile, optimized to search for small variations in the dim light emitted by ultracool dwarfs. The trick is to monitor them in near-infrared light, a form of radiation with wavelengths longer than the visible light our eyes can perceive (infrared radiation is often used for television remote controls). Over the past year, my colleagues on the TRAPPIST team have monitored several dozen ultracool dwarfs to search for the faint transit signals characteristic of an Earth-sized planet, a mere one percent dip in the already faint light they emit. 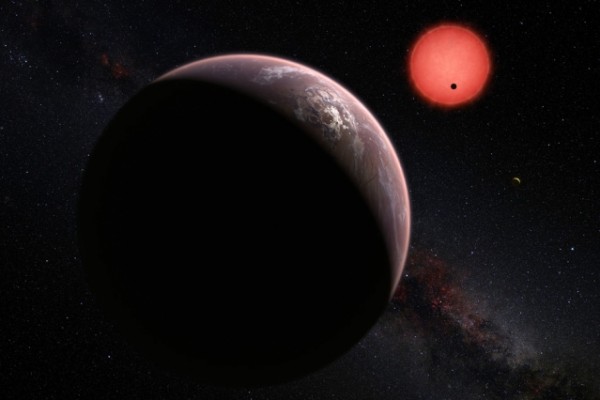 This artist’s rendering shows an imagined view of the three planets orbiting an ultracool dwarf star just 40 light-years from Earth. In this view, one of the inner planets is seen in transit across the disc of its tiny and dim parent star. Image credit: M. Kornmesser/ESO

In September 2015, they found their first signal from a star they’ve dubbed TRAPPIST-1, located just 40 light-years away from us. Over the next several months they found more. In total, the astronomers have inferred the presence of three Earth-sized planets, all on very close orbits around the star, with orbital periods (“years”) ranging from 1.5 days to 73 days.

To have such short orbital periods, the planets must be extremely close to their star, between 1/100th and 1/10th the distance between the sun and the Earth. This is closer than Mercury is to the Sun, and such a small orbit would scorch a planet in our solar system. However, around TRAPPIST-1 these orbits are in and around the habitable zone.

The inner two planets receive two and four times more light energy from their star than the Earth receives from the sun, and while highly reflective surfaces might make these worlds cool enough for liquid water, they are probably more like Venuses – hot planets in which the water has evaporated into the atmosphere – than Earths. But the third planet, TRAPPIST-1d, receives between 20 percent and 100 percent of the starlight that Earth does from our sun (insolation), so it orbits at the right distance to have liquid water on its surface, and is potentially an Earth-like world. 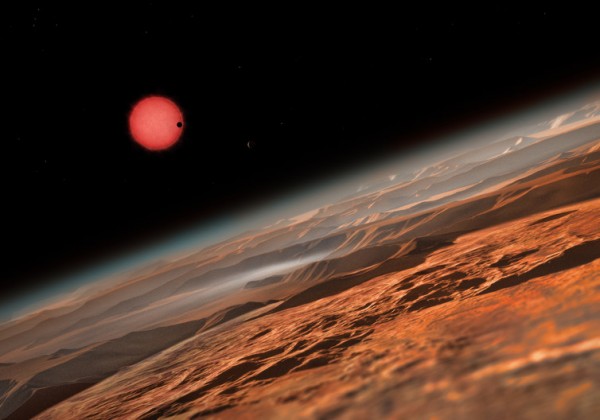 An imagined view from close to one of the three planets orbiting TRAPPIST-1. These worlds have sizes and temperatures similar to those of Venus and Earth – but that’s not all it takes to support life. Image credit: ESO/M. Kornmesser

Filling out the planetary picture

Being at the right distance to have surface liquid water does not guarantee that an Earth-sized planet is truly Earth-like.

First, the proximity of these planets to their host star means they are likely “tidally locked,” forced to rotate at the same rate as they orbit the star, so that one side of the planet is in perpetual day and one side in perpetual night. (Tidal locking is why we always see the same face of the moon from Earth.) While it has long been held that this configuration would prevent the existence of surface liquid water, recent work suggests that such worlds may still have regions of habitability.

The composition and circulation of an atmosphere, if it exists, also plays a major role in habitability, either by reflecting stellar light or trapping heat through the greenhouse effect.

Finally, both tectonic activity and the existence of a protective planetary magnetic field can play roles. Tectonic forces are of particular interest for the innermost planet, TRAPPIST-1b, which may be squeezed and stretched by tidal forces from the host star, heating it from the inside and producing the kind of extensive volcanism we see on Jupiter’s moon Io.

Technicians continue to work on the Webb telescope’s instrumentation in advance of its launch in 2018. Photo credit: NASA/Chris Gunn

The observations obtained by TRAPPIST cannot tell us anything about these planetary details, but the James Webb Space Telescope should tell us more when it is launched in 2018. This advanced replacement to the Hubble Space Telescope will have the sensitivity to detect the even smaller signal of absorption by the planets during their transit. Imprinted on this signal will be the chemical absorption patterns of the gases present in the atmosphere, which may include biogenic gases such as oxygen, methane and nitrous oxide, or volcanic gases such as sulfur dioxide.

The TRAPPIST team will soon be starting the next phase of its search for Earth-like worlds around ultracool dwarfs with the SPECULOOS (Search for habitable Planets EClipsing ULtra-cOOl Stars) survey. This program will monitor 500 of the nearest ultracool dwarfs using four 1-meter robotic telescopes in Cerro Paranal, Chile. Construction of the site is already underway, and the team is looking forward to expanding our census of nearby habitable worlds around the smallest stars.