A tale of 2 colliding exoplanets

Astronomers have new evidence for a collision between 2 nearly Earth-sized planets in the distant solar system Kepler-107. 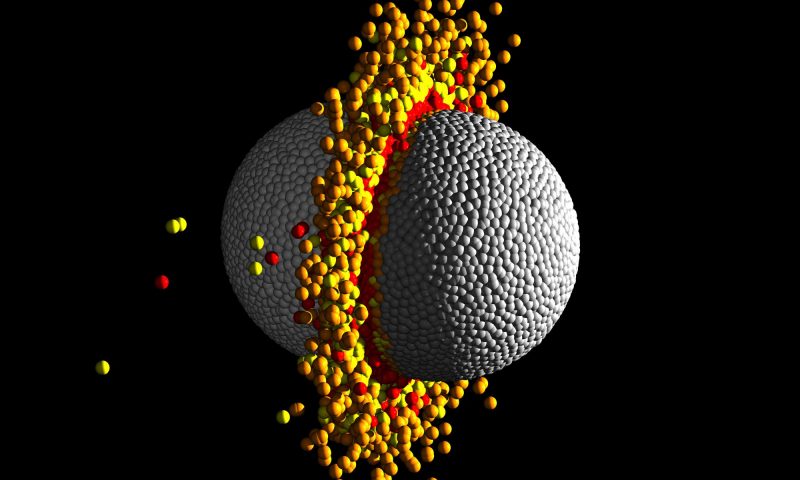 Computer simulation of 2 colliding Earth-mass planets. The temperature range of the material is represented by 4 colors – gray, orange, yellow and red, where gray is the coolest and red is the hottest. Image via Zoe Leinhardt/Thomas Denman/University of Bristol.

Exoplanets have been discovered by the thousands in recent years, with many thousands more expected to be found in the years and decades ahead. Many of those worlds are in multi-planet systems similar to our own solar system. Curious astronomers want to know if any of those planets might ever have collided with each other. If so, how often could it happen?

While there’s been some evidence for planetary collisions in our solar system as it was forming 4 1/2 billion years ago, evidence for collisions between planets in distant solar systems has been elusive so far. But now, a new study suggests that it has happened in at least one known planetary system, the system labeled Kepler-107. The results were published in a new peer-reviewed paper in the journal Nature Astronomy on February 4, 2019. Astronomers Aldo S. Bonomo and Mario Damasso, both of the Istituto Nazionale Di Astrofisica (INAF) and astrophysicist Li Zeng of the Harvard-Smithsonian Center for Astrophysics (CfA) worked together on the study.

Kepler-107 is about 1,714 light-years away, in the direction to our constellation Cygnus the Swan. The study focuses on the two innermost planets orbiting Kepler-107 (out of four known to exist), Kepler-107b and Kepler-107c. They are similar to each other in terms of both radii and orbital periods – their sizes are 1.536 and 1.597 Earth-radii, respectively, with an uncertainty of only about 0.2 percent. Their orbital periods are 3.18 and 4.90 days, respectively.

The video above – via Zoe Leinhardt and Thomas Denman – shows a hydrodynamical simulation of a high-speed head-on collision between two 10-Earth-mass planets.

The fact that one of the planets has a density more than twice that of the other – the outer one of the two – is not easily explained since they should have been affected in almost the same way by stellar radiation from their star.

Then what caused this great difference in density? The research team concludes that one of the planets – the denser one, Kepler-107c – must have been struck by yet another planet sometime in the past. If so, the collision tore away part of the planet’s silicate mantle, leaving behind a dense iron core. As explained by Zeng:

This is one out of many interesting exoplanet systems that the Kepler Space Telescope has discovered and characterized. This discovery has confirmed earlier theoretical work suggesting that giant impacts between planets has played a role during planet formation. The TESS mission is expected to find more of such examples. 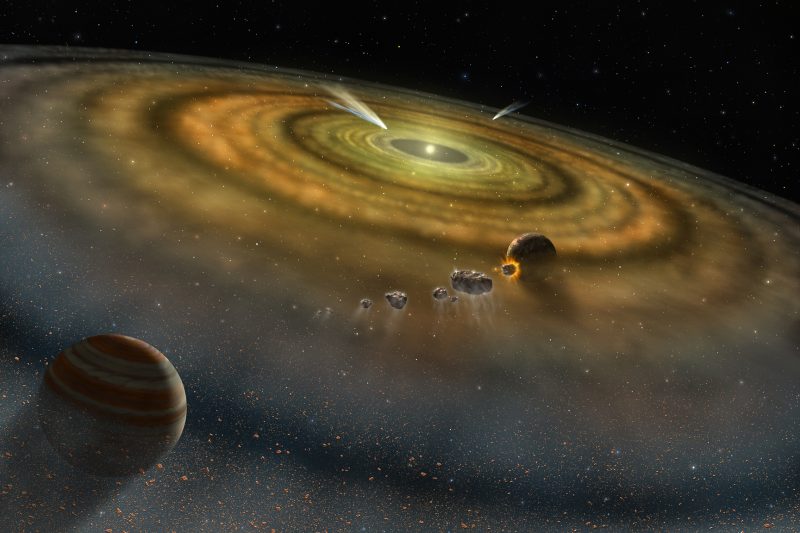 Artist’s conception of the dust and gas surrounding a newly forming planetary system, such as our own. Image via NASA.

It stands to reason that if this impact occurred, then there have probably been many such collisions among the billions of planets estimated to exist in our galaxy alone.

In our own solar system, one leading theory – the giant-impact hypothesis – says that Earth’s moon was formed from an impact between a young, still-forming Earth and another planet about the size of Mars. The impact melted Earth’s outer layers, flinging debris into orbit around Earth. This material then formed a ring of gas, dust and molten rock around Earth. In less than 100 years, this debris clumped together (accreted), growing larger and larger to form our moon.

It is also theorized that similar collisions could explain why Venus rotates backwards in contrast to the other major planets in our solar system. The impact on Venus may also have helped turn the planet into the blazing hellhole we see today. A large collision or series of smaller collisions are also leading theories as to why Uranus is so wildly tilted on its axis, rotating “on its side” as it were. 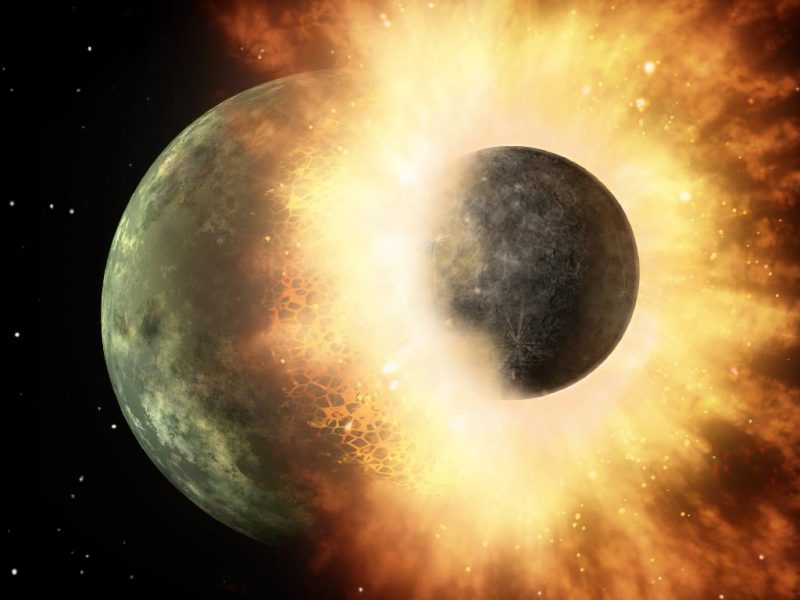 Our own moon is thought to have formed when a body about the size of Mars collided with the young Earth. Image via NASA.

Other collisions between much smaller planetesimals also helped the planets to form in the first place, billions of years ago. Similar collisions still happen today – although at a much lower rate – when meteorites hit the moon, Earth and other bodies in the solar system, producing craters on rocky worlds.

Bottom line: The evidence for a planetary impact in the Kepler-107 system not only explains a curious mystery about how the two innermost planets formed, but also shows that such collisions may be quite common among the many exoplanets out there – similar to how they have happened in our own solar system.

Source: A giant impact as the likely origin of different twins in the Kepler-107 exoplanet system