Are these 19 eccentric asteroids from other star systems?

In the first discovery of its kind, researchers in France have found 19 asteroids in our solar system – between the planets Jupiter and Neptune – that they say are likely of interstellar origin. 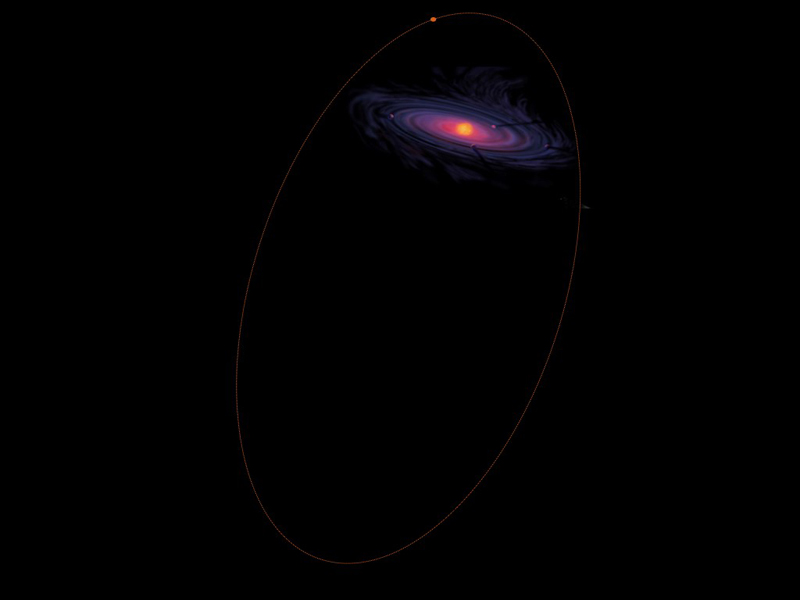 Illustration depicting one of the Centaur asteroids, which the researchers think originated from interstellar space. It was orbiting the sun in an orbit highly perpendicular to the protoplanetary disk of dust and gas, and still maintains that orbit today. Image via NASA/ CNRS.

You likely heard about ‘Oumuamua, the strange asteroid-like object that entered our solar system from interstellar space in 2017. More recently, astronomers found a second interstellar object – definitely a comet this time, labeled 21/Borisov – in 2019. Both of those objects were only visitors to our solar system, passing through for a time before heading back out into interstellar space. Meanwhile, in 2018, with less fanfare, the asteroid 2015 BZ509 – nicknamed Bee-Zed, and officially named Ka’epaoka’wela – was also identified as being of interstellar origin. But this asteroid isn’t just passing through. It’s a permanent member of our solar system, orbiting the sun. Now, researchers from the French National Centre for Scientific Research (CNRS) say they’ve found the first known population of 19 interstellar asteroids, now-permanent members of our solar system that apparently originated from somewhere else in space.

Like 2015 BZ509, they are permanent residents of the solar system, belonging to a group of objects called Centaurs, small rocky bodies orbiting between the Trojan asteroids near Jupiter and the Kuiper Belt objects beyond Neptune.

The 19 new interstellar asteroids are in highly inclined orbits in contrast to other asteroids, comets or planets in our solar system. 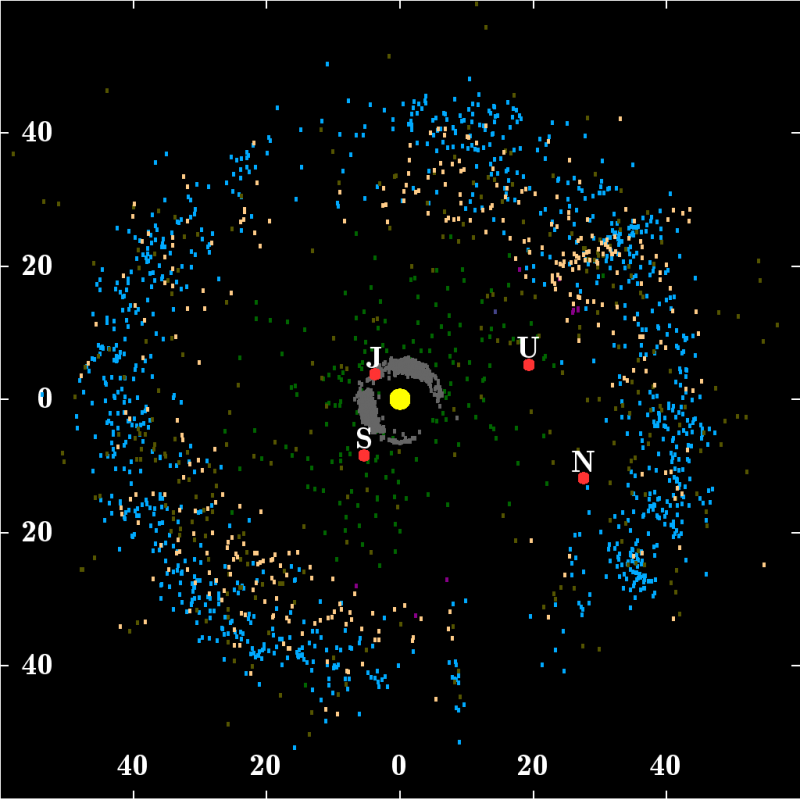 The Centaurs (red dots) are small rocky objects generally between the Kuiper Belt beyond Neptune (N) and the Trojans near Jupiter (J). Image via WilyD/ Wikipedia.

The new peer-reviewed findings were published in the journal Monthly Notices of the Royal Astronomical Society (MNRAS) on April 23, 2020. The study was conducted by lead author Fathi Namouni, a CNRS researcher in the Laboratoire Lagrange and Helena Morais, researcher at UNESP in Brazil.

While these asteroids have been orbiting the sun for a long time, they did not originate here, according to the new research. Analysis indicates that they were not part of the original protoplanetary disk of dust and gas that surrounded our sun when it was first born 4.5 billion years ago, where the young planets were forming, so they must have come here from somewhere else. Namouni said in a statement:

The close proximity of the stars meant that they felt each others’ gravity much more strongly in those early days than they do today. This enabled asteroids to be pulled from one star system to another. 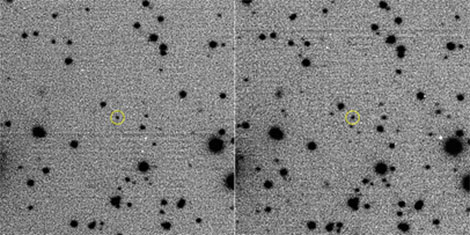 2015 BZ509, discovered in 2018, was the first permanent asteroid in the solar system (unlike ‘Oumuamua or 21/Borisov) determined to have originated from interstellar space. Image via Christian Veillet/ Large Binocular Telescope Observatory/ CNRS.

So how did Namouni and Morais determine the interstellar origin of these asteroids?

They developed a precise computer simulation of the orbits of these asteroids. By doing so, they could “go back in time” to find out what the positions of the asteroids were in the distant past. The simulations showed that, like now, the asteroids were eccentric, orbiting the sun highly perpendicularly to the orbits of the young planets and other objects at the time. They were also located far away from the protoplanetary disk itself. These two findings indicate that the asteroids did not form in the protoplanetary disk along with all the other objects in our solar system, but rather they must have originated from somewhere else, perhaps around another star, and were caught by the sun’s gravity early in the solar system’s history. 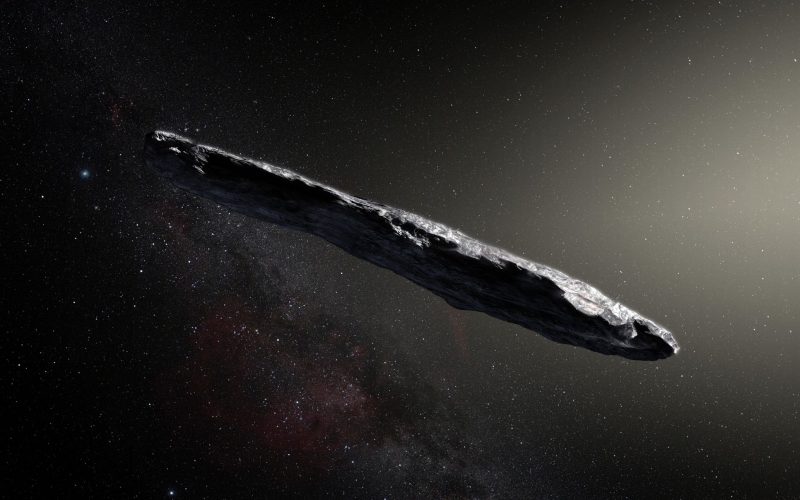 Artist’s concept of ‘Oumuamua, whose actual appearance is unknown. While it was actually the first rocky interstellar visitor identified, in 2017, it didn’t remain in our solar system like the asteroids discussed in the new study have. Image via ESO/ M. Kornmesser.

These asteroids are similar to 2015 BZ509, which shares an orbit with Jupiter, but is traveling in the opposite direction. In 2018, the same researchers, Namouni and Morais, found that the asteroid has always had that retrograde orbit, going back to the birth of the solar system. This suggested it came from a nearby star system, and was captured by Jupiter’s gravity. 2015 BZ509 was first spotted in the Pan-STARRS survey in 2015.

It’s still possible that there could be another explanation for asteroids like these, but as they explained in a recent Gizmodo article on April 23, 2020, Namouni and Morais seem confident in their conclusions. They’ve faced some skepticism from other scientists, but so far no peer-reviewed papers have been published refuting their results. Only time will tell if their results continue to stand up to scrutiny, but at the moment, it seems that they have established a good case for some Centaurs (and perhaps some other similar objects in the solar system?) having an extraterrestrial origin. 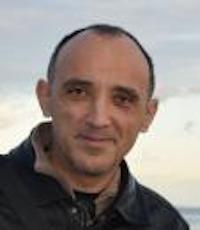 Fathi Namouni of CNRS, lead author of the new study. Image via OCA.

Objects like ‘Oumuamua and 21/Borisov were more difficult to study, since they were only in our solar system for a relatively short amount of time. But these other 19 asteroids, although far away from Earth, keep orbiting the sun, making it easier to observe them remotely over long time periods. If they truly are interstellar, then they offer a unique opportunity to examine asteroids that are alien to our solar system, and compare them to asteroids that were already here when the solar system began to form. Additional analysis could show how they differ in appearance or composition to asteroids that formed here, and provide valuable clues as to how asteroids and other rocky bodies form around other stars.

Bottom line: A new study from CNRS reveals that 19 asteroids in our solar system are actually of interstellar origin.