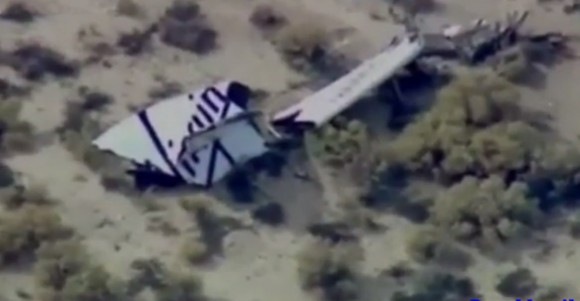 One of two tail sections of SpaceShipTwo on the floor of the Mojave desert shortly after the crash. Image via Mojave Rescue & Emergency Response Team

In the second accident this week involving a spacecraft, Virgin Galactic’s SpaceShipTwo rocket plane – a craft intended to carry tourists on suborbital flights – exploded and crashed during a test flight Friday (October 31, 2014). One crew member was killed. A second parachuted to the ground and was seriously injured. The crash scattered debris across a two-mile swath of the Mojave desert, about 95 miles (150 kilometers) from Los Angeles, California.

One person was declared dead at the scene, and another suffered “major injuries” and was taken to nearby Antelope Valley Hospital, according to Donny Youngblood, sheriff of Kern County, California during a news conference Friday. He said first responders found the aircraft “in several different pieces.”

Names of the pilots have not yet been released. Virgin Galactic – which was founded by billionaire Richard Branson – said in a statement Friday that “a serious anomaly” had occurred to cause the crash.

Stuart Witt, chief executive of Mojave Air and Space Port from which the craft took off, said of the launch during Friday’s news conference:

From my eyes and my ears, I detected nothing that appeared abnormal.

If there was a huge explosion that occurred, I didn’t see it.

The disaster occurred shortly after 10 a.m. PDT (17 UTC) on October 31, when SpaceShipTwo separated from a craft called White Knight Two, which was carrying the vehicle into the air, according to the Federal Aviation Administration. The FAA and the National Transportation Safety Board are investigating the crash.

The SpaceShipTwo craft is the one intended to fly passengers to the edge of space, beginning as early as 2015. Alan Boyle of NBC News reported that:

A nearly identical rocket plane is already under construction inside a Mojave hangar. More than 700 customers, including celebrities such as Ashton Kutcher and Justin Bieber, have paid as much as $250,000 to take a ride. 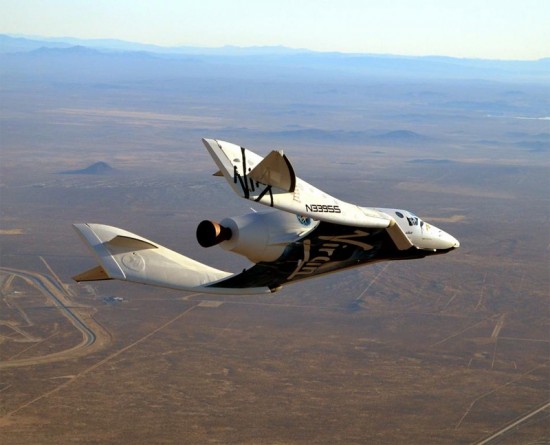 SpaceShipTwo – shown here in a successful test flight over the Mojave Desert in late 2012 – is a six-passenger, two-pilot spaceship owned by Virgin Galactic.

Thank you for your messages of support; they are much appreciated at this difficult time.

There is much speculation about what exactly caused today’s accident, but we will not have all the facts for some time yet. In the meantime, we wanted to confirm a few key details.

First, the Virgin Galactic team is cooperating with our partners at Scaled Composites and with the US National Transportation Safety Board (NTSB), Federal Aviation Administration, and local authorities on the investigation. The NTSB is scheduled to arrive in Mojave tomorrow morning to commence their investigation.

Second, local authorities have confirmed that one of the two Scaled Composites pilots onboard SpaceShipTwo died during the accident. The other pilot parachuted to the ground, and is now being treated at a local hospital. All of us are deeply saddened by today’s events, and our thoughts and prayers are with the families of all those affected by this tragic accident.

At a press conference earlier today, our CEO, George said: “Our primary thoughts at this moment are with the crew and family, and we’re doing everything we can for them now. I’d like to recognize the work of the first responders who we work with in the Antelope Valley for their efforts on behalf of the team. We’re also thinking of the team members that we have at the companies that have been working on this program. Space is hard and today was a tough day. We are going to be supporting the investigation as we figure out what happened today. We’re going to get through it. The future rests in many ways on hard days like this, but we believe we owe it to the team, that has been working so hard on this endeavor, to understand this and to move forward. And that is what we’ll do.”

Lastly, Richard Branson is on his way to Mojave as we speak to visit with our team.

Friday’s crash of SpaceShipTwo was the second disaster this week involving a craft intended for spaceflight. On October 28, an unmanned Antares rocket carrying a space capsule – loaded with supplies for the International Space Station – exploded in a massive fireball six seconds after liftoff from NASA’s Wallops Flight Facility in Wallops Island, Virginia.

Bottom line: Virgin Galactic’s SpaceShipTwo rocket plane – a craft intended to carry tourists on suborbital flights – exploded and crashed during a test flight on October 31, 2014. One crew member was killed. A second parachuted to the ground and was seriously injured.