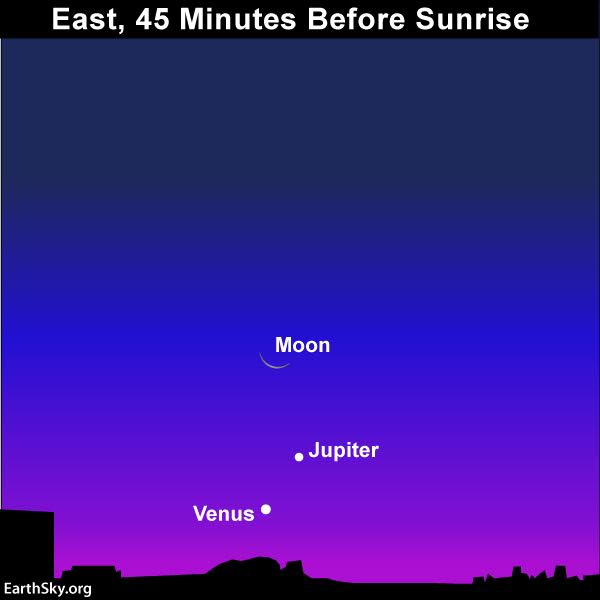 Before sunup on November 16, 2017, find an unobstructed horizon in the direction of sunrise to get the best view of the waning crescent moon, plus the sky’s two brightest planets, Venus and Jupiter. They’ll be extremely low in the east at sunup, and an unobstructed horizon – and clear sky to the horizon – will definitely be needed. And even if you have those two prerequisites – clear sky, open horizon – whether you see them or not depends on your latitude on Earth’s globe. Keep binoculars handy. A telephoto lens will also pick them up, and, in fact, this is a wonderful photo opportunity.

From around the world on November 16, the slender waning crescent moon rises in the east first, followed by Jupiter and then Venus. At mid-northern latitudes – like those in the U.S. and Europe – Venus rises better than an hour before the sun.

Click here for a recommended almanac to find the rising times of the moon, Jupiter and Venus in your sky.

The lit side of the moon points in the direction of Jupiter and Venus, giving you a good idea of where to look for them. If you are at a very southerly latitude on Earth, you can always use binoculars to seek for these worlds beneath the moon in the murky glow of morning twilight. Fortunately, Venus and Jupiter rank as the brightest and second-brightest planets in Earth’s sky, respectively, so you may well see these worlds with the unaided eye, even though they’re sitting low in the twilight. Think photo opportunity!

In fact, if you get up before dawn on these November and December mornings, you can also view the the star Spica and the planet Mars above Jupiter. Day by day, Jupiter and Spica will climb upward toward Mars in the predawn/dawn sky. Spica will pair up with Mars on November 29, 2017, and Jupiter will meet up with Mars on January 7, 2018.

Bottom line: On November 16, 2017, look for Jupiter and Venus beneath the waning crescent moon. They’ll be low in the east, shortly before sunup.

Thank you! Your submission has been received!
Oops! Something went wrong while submitting the form.
END_OF_DOCUMENT_TOKEN_TO_BE_REPLACED