August 8 and 9 before sunup: Moon in Gemini 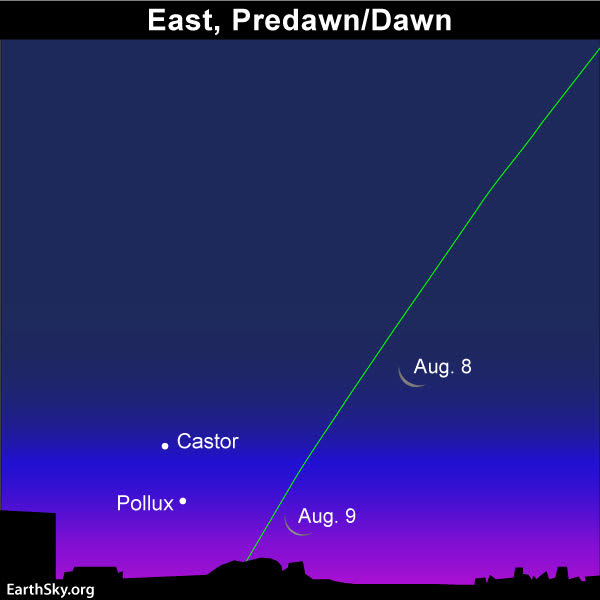 On the mornings of August 8 and 9, 2018, you’ll find the waning crescent moon in front of the constellation Gemini the Twins. Gemini’s two brightest stars, Castor and Pollux, represent twin brothers in Greek mythology, despite the fact that these two stars don’t look alike. If you look closely, you’ll see that Pollux is slightly brighter than Castor. Pollux is also more golden in color.

There are multiple versions of the ancient tale of the Twins. In Greek mythology, both Castor and Pollux were born from the same mortal mother, Leda, with different fathers. Castor, the mortal brother, was sired by Tyndareus, a mortal king of Sparta. Pollux, the immortal brother, was the son of Zeus, the king of the gods, who was said to seduce Leda in the form of a swan.

It’s said that – when the mortal brother Castor was slain in battle – his immortal brother Pollux was inconsolable. He begged his father Zeus to relieve him of the bonds of immortality. Zeus granted his request, and so Pollux joined his brother in death, choosing togetherness with his brother over eternal life. According to the legend, Zeus allowed the brothers to live together in the heavens as the constellation Gemini the Twins.

But, it’s said, the heavenly twins must spend a portion of the year in Hades, the underworld and land of the dead in Greek mythology.

And indeed – from the vantage point of Earth – the sun annually passes in front of the constellation Gemini from about June 21 to July 21 each year. Gemini is lost in the sun’s glare for that month at least, and is not visible in our nighttime sky. Thus it could be said that the heavenly twins dwell in the underworld during that time of year.

Of course, it’s really Earth that’s doing the moving. The Earth’s yearly orbit around the sun causes the sun in our sky to travel full circle in front of the constellations of the zodiac every year.

Still, at this time of year – as we look eastward before sunrise for Gemini’s return – it’s easy to imagine the fond brothers returning from the underworld to serve as a tribute in our sky to the redemptive power of brotherly love.

Bottom line: The moon has now waned to a slim crescent phase. It’s near the stars Castor and Pollux – the legendary Gemini “twins” – on August 8 and 9, 2018.

Thank you! Your submission has been received!
Oops! Something went wrong while submitting the form.
END_OF_DOCUMENT_TOKEN_TO_BE_REPLACED