Moon and Regulus on December 8 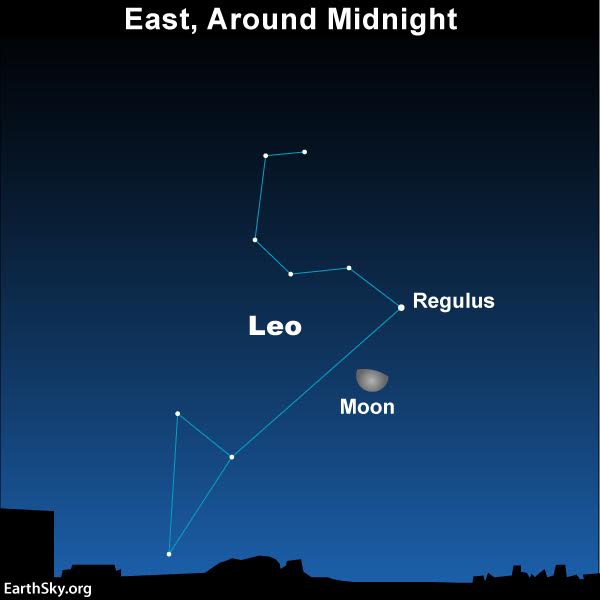 Are you a night owl? Tonight – December 8, 2017 – look eastward before going to bed, and you just might catch the moon and the star Regulus ascending over your horizon. Or if you’re an early riser – and go to sleep before the moon and Regulus come up at late evening – wake up before dawn to see the celestial couple.

Whether you’re sky gazing at late night or during the predawn hours, look first for the waning gibbous moon. The nearby bright star will be Regulus, the brightest star in Leo the Lion. Regulus is sometimes called the Heart of the Lion.

The sky chart at top – showing the moon and Regulus – is for mid-northern North American latitudes. In North America, Regulus rises first and then the moon follows Regulus into the sky shortly thereafter. But at late evening on December 8 from the world’s Eastern Hemisphere – Europe, Africa, Asia, Indonesia, Australia and New Zealand – the moon is more offset toward Regulus. From some places in the world, the moon and Regulus will actually rise at the same time tonight.

Take a look at the worldwide map below via IOTA (International Occultation Timing Association). The area of the world to the north of (above) the white line can see the lunar occultation of Regulus in a nighttime sky.

If you live in France or Great Britain (the turquoise loop at left), the beginning of the occultation takes place when the moon and Regulus are still below the horizon. But the star will pop out from behind the moon after moonrise.

For your convenience, we give the local times of the occultation for various localities:

Live in Europe? Here are the time conversions:

Click here to find out when the moon rises into your sky, and remember to check the moonrise and moonset box.

Click here to find out when Regulus rises into your sky, and remember to check Regulus as the celestial object of interest.

Bottom line: Are you a night owl? Then look eastward before going to bed on the evening of December 8, 2017. The star near the moon is Regulus, Heart of the Lion in the constellation Leo.

Thank you! Your submission has been received!
Oops! Something went wrong while submitting the form.
END_OF_DOCUMENT_TOKEN_TO_BE_REPLACED