Mars near Pleiades cluster at nightfall

Mars and the Pleiades star cluster will fit (or nearly fit) in the same binocular field all this week. They’ll come closest together on the sky’s dome on or near April 22. 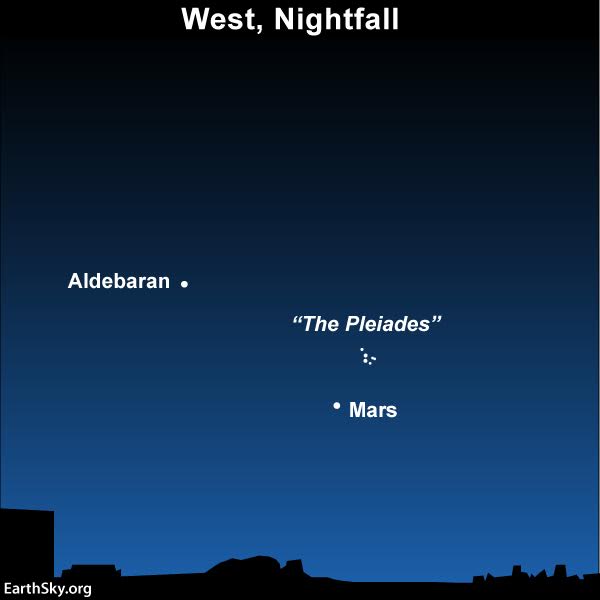 Mars and the Pleiades cluster will fit (or nearly fit) in the same binocular field all this upcoming week. Mars and the Pleiades come closest together on the sky’s dome on or near April 22. Mars is a red planet, and there’s another reddish object nearby – the star Aldebaran – brightest star in the constellation Taurus the Bull. This star is about twice as bright as Mars is right now. From most places worldwide, Aldebaran shines higher in the sky and stays out later after dark than Mars does.

Mars and the Pleiades will follow the sun beneath the horizon by very early evening. Mars, though visible to the eye now, is a fading ember in our sky. It’ll soon be lost in the evening twilight (these recommended almanacs can tell you Mars’ setting time in your sky).

Remember, Mars and the Pleiades are not close together in space; they just happen to align right now, near the same point on the sky’s dome, as viewed from our earthly vantage point.

Also, after you’ve found Mars, turn in the opposite direction – toward the eastern half of the sky – to see the very bright planet Jupiter and bright star Spica, as depicted on the sky chart below. 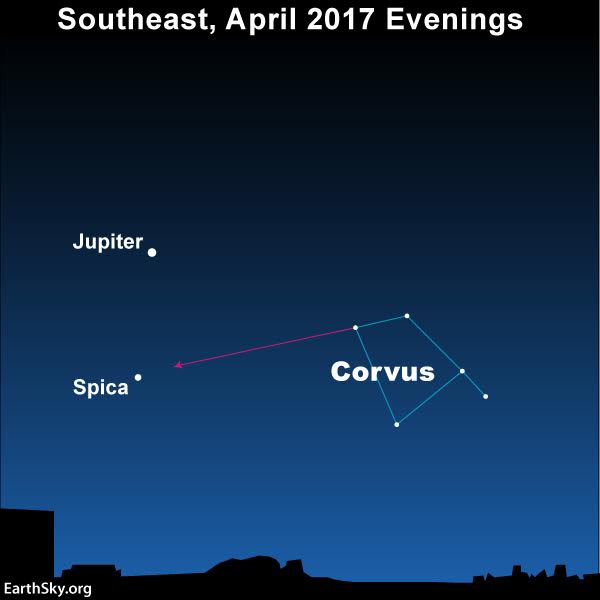 The planet Jupiter, star Spica and constellation Corvus the Crow as they appear at early evening from northerly latitudes. You can can use Spica as a guide star to the great Omega Cenaturi star cluster.

Bottom line: During the week beginning April 17, 2017, Mars and the Pleiades cluster fit in the same binocular field. Look for them as soon as you can after sunset. They set shortly behind the sun.