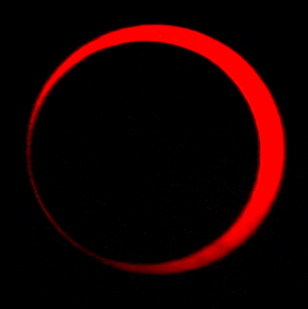 Above image of annular eclipse via Wikipedia

Today – February 26, 2017 – the new moon will take dead aim on the sun, crossing directly in front of it. The moon was at apogee, or farthest from Earth for the month, on February 18, however. So the moon is still too far from Earth to cover the sun completely. Thus the February 26 eclipse – first of two solar eclipses in 2017 – is not total. It is an annular – or ring of fire – eclipse of the sun. This annular eclipse is visible from in Earth’s Southern Hemisphere, along a very narrow path (in red on the diagram below) that starts over the South Pacific Ocean and then crosses South America, the South Atlantic Ocean and ends in Africa.

It’s only from there that the annulus – or ring – of sunshine will be seen to encircle the new moon silhouette.

A much larger swath of the world can watch a partial solar eclipse to the north and south of this annular eclipse path.

Remember to use eye protection if you’re in a position to watch this eclipse! At no time will the sky grow dark; at no time will it be safe to view the eclipse with the eye alone. An annular eclipse, in fact, is essentially a partial eclipse, albeit a particularly photogenic one.

The video below, from Colin Legg and Geoff Sims, captures the sunrise annular solar eclipse from three locations in the Pilbara, Western Australia, May 10, 2013.

For your convenience, we give the times for the February 26 solar eclipse in local time for Coyhaique, Chile, and Likasi, Congo. Click here for links to sites giving eclipse times for numerous localities around the world.

The path of the antumbral shadow

During an annular eclipse of the sun, the moon’s umbra (dark, cone-shaped shadow) never reaches the Earth’s surface. The shadow extending beyond the umbra is called the antumbra. As seen from the section of Earth within the antumbra, the moon is directly in front of the sun and an annulus – ring – of sunshine surrounds the new moon. The B in the diagram below illustrates an annular eclipse.

We provide a more detailed map of the February 26 annular eclipse below. The annular eclipse in red starts at sunrise (at left, over the Pacific Ocean) and ends at sunset (at right, over Africa). Midway between, the greatest eclipse occurs over the South Atlantic Ocean at solar noon. On a worldwide scale, the annular eclipse from start to finish lasts for about 3 and 1/4 hours. But from any point along the path of the antumbral shadow, the maximum duration is only 1 minute and 22 seconds. The duration is near a maximum just after sunrise or before sunset; at the greatest eclipse, annularity lasts the minimum 44 seconds.

If the moon were a little bit closer, it would result in a rare hybrid solar eclipse: part annular and part total. The solar eclipse on April 8, 2005 serves as a prime example of a hybrid eclipse, whereby the path of the central eclipse starts out as annular and finishes up as annular, yet the in-between portion of the eclipse path showcases a total solar eclipse. Much less often, a hybrid eclipse can be annular at only the beginning or the end of the eclipse path.

The longest annular eclipses occur when the moon is near apogee (greatest distance from Earth) and the Earth is near perihelion (closest point to the sun). Given favorable circumstances, an annular eclipse can last for over 12 minutes. The last time this happened was during the annular eclipse of December 24, 1973. It looks like we won’t have another annular eclipse lasting 12 minutes again for centuries to come.

By the way, the longest annular eclipse of the 21st century took place on January 15, 2010, lasting 11 minutes and 8 seconds.

Six lunar months after the annular solar eclipse on February 26, 2017 will bring a total eclipse of the sun to mainland United States on August 21, 2017.

These sites give eclipse times for the February 26 annular eclipse in local time (no conversion is necessary):

These sites give the eclipse times in Universal Time, so you must convert from Universal Time to your local time. Click here to find out how.

Bottom line: The annular eclipse of the sun on February 26, 2017 takes place in the Southern Hemisphere, along a very narrow path that runs through South America and Africa.

Thank you! Your submission has been received!
Oops! Something went wrong while submitting the form.
END_OF_DOCUMENT_TOKEN_TO_BE_REPLACED