Asteroid 2014 CU13 will pass about 8 lunar distances (2 million miles or 3 million km) away. Both the Virtual Telescope Project and Slooh will be broadcasting. 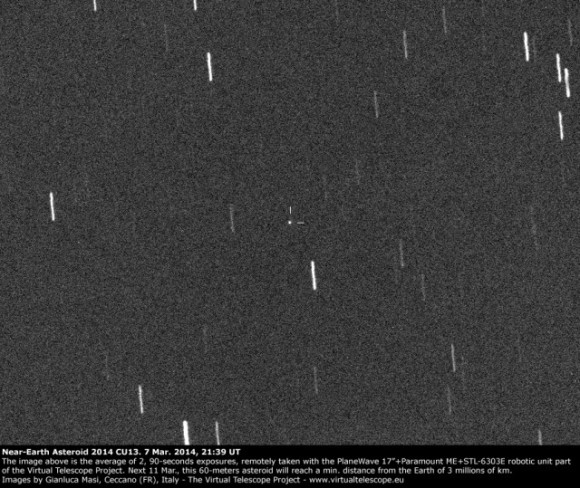 Discovered on February 11, 2014 by the Mt. Lemmon Survey, asteroid 2014 CU13 is traveling at 43,173 mph (19.31 km/s). It is not coming anywhere near enough Earth to be a threat to us. Astronomers want to pin down the exact orbit of this asteroid, and they’re asking amateur astronomers to help. 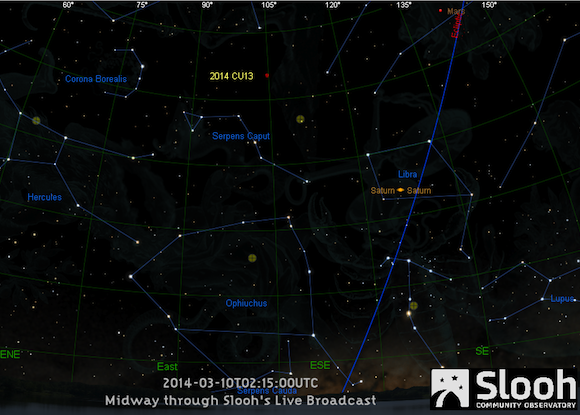 Slooh in particular is trying to call attention to this asteroid so that amateur astronomers will help further pinpoint its orbit. Slooh’s live image stream will be accompanied by discussions led by Paul Cox, Slooh Host and Observatory Director, along with special guest, Dr. Jose Luis Galache from the Minor Planet Center. Viewers can watch free on Slooh.com or by downloading the Slooh iPad app, and viewers can ask questions during the show by using hashtag #asteroid.

Slooh said it was providing orbital data to the Minor Planet Center all last week in order to help improve our knowledge of the asteroid’s orbit. Slooh said in a press release:

Citizen astronomers should tune into the show to learn how to track asteroids, either through Slooh’s robotic observatories or using their own equipment.

Discovering near-Earth asteroids has become an automatic process for the survey telescopes, but discovery is just the beginning. There is so much science to do after that! Amateur astronomers with access to pro-level telescopes under dark skies are in a great position to learn more about an asteroid than just where it’s going.