It’s getting warmer, but not as fast as climate models earlier predicted. Airborne particles from volcanic activity might help explain why.

Over the past decade, the climate has not warmed as swiftly as global climate models predicted, but it hasn’t been clear what factors might be tamping down the warming. Some experts point to increased industrial emissions of sulfur dioxide from coal burning over China and India. Others have wondered whether sulfur emissions from volcanic activity could also play a role. However, it’s long been thought that only colossal volcanic events such as the 1991 Mt. Pinatubo eruption could release a sizable enough quantity of sulfur dioxide to affect the climate. 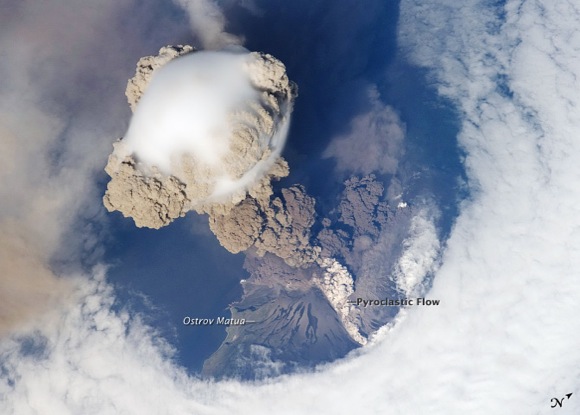 A study recently published in Geophysical Research Letters has shown that small- to moderate-size volcanoes, rather than industrial emissions over Asia, have helped slow down warming over the last decade. The cooling effect of these volcanic sulfate particles, known as aerosols, has counterbalanced about 25% of the expected warming over the last decade. The study’s multi-institutional team was led by Ryan Neely, an atmospheric scientist at NCAR who began the project while at the University of Colorado Boulder (CU-Boulder).

Sulfate aerosol forms naturally in a layer of the atmosphere known as the stratosphere, which begins above the height at which commercial airliners fly. The stratospheric aerosol layer plays an important role in balancing the heat of Earth’s atmosphere as the particles act like a mirror, reflecting light back into space and preventing some of the Sun’s energy from penetrating the troposphere, where we experience weather.

Previous research indicates that the stratospheric aerosol layer has increased by 4–10% per year since 2000. But there have been conflicting theories about the source of that increase. One study suggested that this growth in stratospheric aerosol originated in China and India due to their proximity to the Asian monsoon, which can fast-track pollution upward, creating a so-called “gateway” to the stratosphere. However, recent satellite observations have linked the growth in the aerosol layer to emissions from relatively small and frequent volcanic eruptions.

To parse the individual contributions of aerosol from industrial emissions and volcanoes, Neely and his colleagues used an array of observations, ranging from satellites to first-hand accounts, to compile data on volcanic activity across the globe over the last decade. They then turned to a new database of volcanic sulfur dioxide emissions as well as inventories of emissions from industrial activity in Asia, inputting that information into a computer model of global climate. Their work included a detailed analysis of the aerosol properties.

When they compared the model output to satellite observations, “It was clear that the volcanoes had the larger impact,” Neely says. “The anthropogenic emissions, though much larger than the amount of sulfur emitted by the volcanoes, had little or no impact on the region we looked at in this study.”

Neely cautions that, while the new study shows the importance of volcanoes on a decadal level, there is a need to learn more about their effects on year-to-year climate variability as well. “Though we show that volcanoes had the most impact in this instance, this has not and may not always be true,” he says.