Mysterious bright radio flashes that appear for only a brief moment on the sky and do not repeat could be the final farewell of a massive star collapsing into a black hole.

Radio telescopes have picked up some bright radio flashes that appear for only a brief moment on the sky and do not repeat. Scientists have since wondered what causes these unusual radio signals. An article in this week’s issue of Science (Thornton et al.) suggests that the source of the flashes lies deep in the early cosmos, and that the short radio burst are extremely bright. However, the question of which cosmic event could produce such a bright radio emission in such a short time remained unanswered. The astrophysicists Heino Falcke from Radboud University Nijmegen and Luciano Rezzolla from the Max Planck Institute for Gravitational Physics (Albert Einstein Institute/AEI) in Potsdam provide a solution for the riddle. They propose that the radio bursts could be the final farewell greetings of a supramassive rotating neutron star collapsing into a black hole. 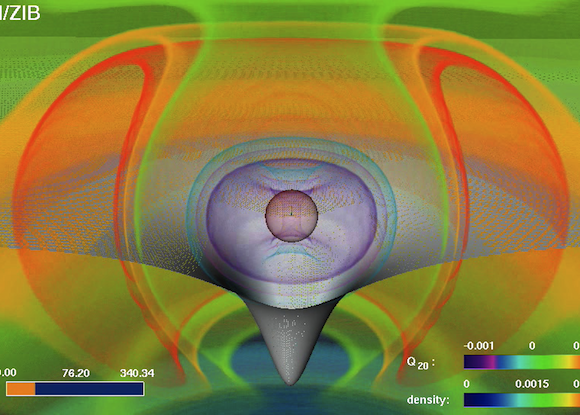 Neutron stars are the ultradense remains of a star that has undergone a supernova explosion. They are the size of a small city but have up to two times the mass of our Sun. However, there is an upper limit on how massive neutron stars can become. If they are formed above a critical mass of more than two solar masses, they are expected to collapse immediately into a black hole.

Falcke & Rezzolla now suggest that some stars could postpone that final death through fast rotation for millions of years. Like a ballerina spinning around her own axis, centrifugal forces could stabilize these overweight neutron stars against collapse and leave them in a ‘half-dead’ state for up to a few million years. Nonetheless, the star is just buying time and even with this trick it cannot avoid the inevitable.

Neutron stars have extremely strong magnetic fields threading their environment like huge propeller blades. Any leftover matter in the surroundings will be blown away by this magnetic fan and rotational energy is radiated away. Thus, while the half-dead star ages, it also slows down and becomes more and more compact, with gravity playing an ever stronger role. At some point the tired star can no longer withstand gravity’s pull. It will cross the ultimate death-line and suddenly collapse to a black hole while transmitting a strong radio flash.

Astrophysicists normally expect a gravitational collapse to be accompanied by bright fireworks of optical and gamma-ray radiation from the imploding matter. This characteristic emission, however, is not seen in the newly found fast radio bursts. Falcke & Rezzolla suggest that this is because the neutron star has already cleaned out its surroundings and the remaining stellar surface is quickly covered by the emerging event horizon. 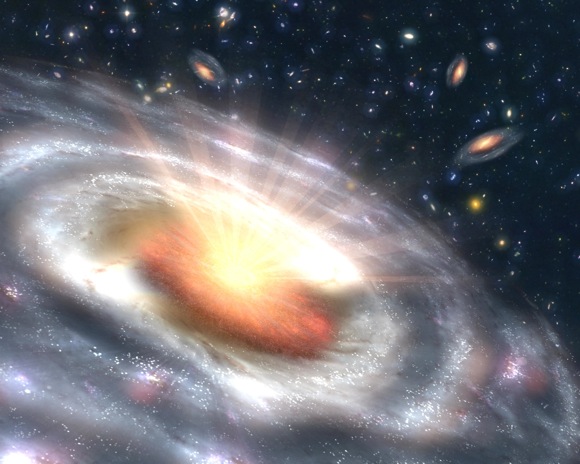 Artist concept of a growing black hole, or quasar, seen at the center of a faraway galaxy. Credit:NASA/JPL-Caltech

“All the neutron star has left is its magnetic field, but black holes cannot sustain magnetic fields, so the collapsing star has to get rid of them,” explains Prof. Falcke and adds: “When the black hole forms, the magnetic fields will be cut off from the star and snap like rubber bands. As we show, this can indeed produce the observed giant radio flashes. All other signals you normally would expect — gamma rays, X-rays — simply disappear behind the event horizon of the black hole.”

Because of its single, ultra-rapid and unrepeatable signal, Falcke and Rezzolla named these objects ‘blitzars’, from the German blitz (flash). This is opposed to pulsars, which are rotating neutron stars that are flashing repeatedly like cosmic lighthouses and simply fade away.

Prof. Rezzolla explains: “These fast radio bursts could be the first evidence of the birth of a black hole, whose formation is therefore accompanied by an intense, almost pure, radio-wave emission. Interestingly, a blitzar is at the same time the farewell signal of a dying neutron star and the first message of from a newly born black hole.”

The new theory proposed by Falcke & Rezzolla provides a first solid interpretation of the previously mysterious radio bursts. Their work has been submitted to the journal ‘Astronomy & Astrophysics.’

To further test their proposal, more observations of the so far elusive radio bursts are required. Falcke and his colleagues plan to use telescopes like the new LOFAR radio telescope to detect more of these dying stars in the future. This would allow them to locate the events quicker and more precisely, and to observe this new formation channel of black holes in the depths of the cosmos with keen ‘radio eyes.’