Hidden magma layer could play role in shaping the geologic face of our planet.

Scientists have discovered a layer of liquified molten rock in Earth’s mantle that may be responsible for the sliding motions of the planet’s massive tectonic plates.

The finding may carry far-reaching implications, from understanding basic geologic functions of the planet to new insights into volcanism and earthquakes. 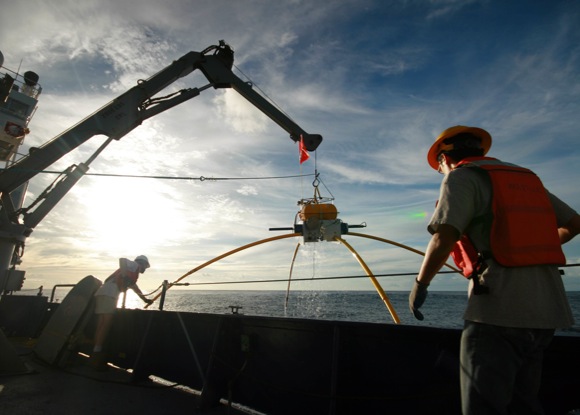 The research was funded by the National Science Foundation (NSF), and is reported in this week’s issue of the journal Nature by Samer Naif, Kerry Key, and Steven Constable of the Scripps Institution of Oceanography (SIO), and Rob Evans of the Woods Hole Oceanographic Institution.

“This new image greatly enhances our understanding of the role that fluids, both seawater and deep subsurface melts, play in controlling tectonic and volcanic processes,” said Bil Haq, program director in NSF’s Division of Ocean Sciences, which funded the work through the NSF Directorate for Geosciences’ MARGINS (now GeoPRISMS) Program.

The scientists discovered the magma layer at the Middle America trench off Nicaragua’s shores. 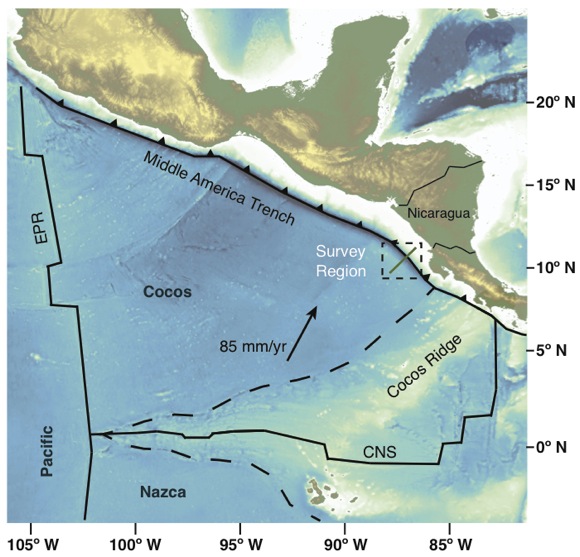 Map of the survey region where the research was conducted. Credit: Scripps Institution of Oceanography

Using advanced seafloor electromagnetic imaging technology pioneered at SIO, the scientists imaged a 25-kilometer- (15.5-mile-) thick layer of partially melted mantle rock below the edge of the Cocos plate where it moves beneath Central America.

The new images of magma were captured during a 2010 expedition aboard the research vessel Melville.

After deploying a vast array of seafloor instruments that recorded natural electromagnetic signals to map features of the crust and mantle, the scientists realized they had found magma in a surprising place.

“This was completely unexpected,” said Key. “We went out looking to get an idea of how fluids are interacting with plate subduction, but we discovered a melt layer we weren’t expecting to find.”

For decades scientists have debated the forces that allow the planet’s tectonic plates to slide across the Earth’s mantle. 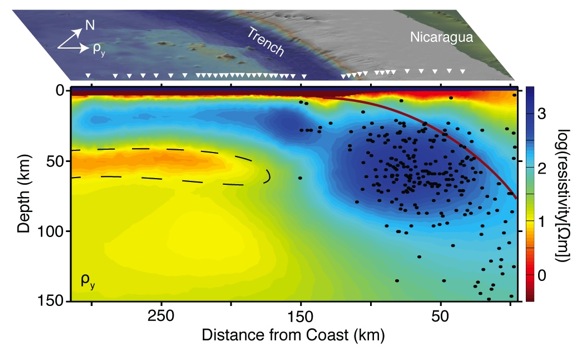 Studies have shown that dissolved water in mantle minerals results in a more ductile mantle that would facilitate tectonic plate motions, but for many years clear images and data required to confirm or deny this idea were lacking.

“Our data tell us that water can’t accommodate the features we are seeing,” said Naif. “The information from the new images confirms the idea that there needs to be some amount of melt in the upper mantle. That’s what’s creating this ductile behavior for plates to slide.”

The marine electromagnetic technology employed in the study was originated by Charles “Chip” Cox, an emeritus oceanographer at SIO, and in recent years further advanced by Constable and Key.

They have been working with the energy industry to apply this technology to map offshore oil and gas reservoirs.

The researchers say their results will help geologists better understand the structure of the tectonic plate boundary and how that affects earthquakes and volcanism.

“One of the longer-term implications of our results is that we are going to understand more about the plate boundary, which could lead to a better understanding of earthquakes,” said Key.

The researchers are now trying to find the source that supplies the magma in the newly discovered layer.