Researchers are working on a multi-university, nationwide project for the U.S. Navy that one day will put life-like autonomous robot jellyfish in waters around the world. Make sure you check out the cool video!

The main focus of the program is to understand the fundamentals of propulsion mechanisms utilized by nature, said Shashank Priya, associate professor of mechanical engineering and materials science and engineering at Virginia Tech, and lead researcher on the project. Future uses of the robot jellyfish could include conducting military surveillance, cleaning oil spills, and monitoring the environment.

This isn’t science fiction. It’s happening now in a lab inside Virginia Tech’s Durham Hall, where a 600-gallon tank is regularly filled with water as small robotic jellyfish are tested for movement and energy self-creation and usage. A synthetic rubbery skin, squishy in one’s hand, mimics the sleek jellyfish skin and is placed over a bowl-shaped device covered in electronics. When moving, they look weirdly alive.

The robotic creatures are called RoboJelly are being designed to operate on their own energy versus, say, sea crabs, or mollusks.

“Jellyfish are attractive candidates to mimic because of their ability to consume little energy owing to a lower metabolic rate than other marine species, survivability in varying water conditions, and possession of adequate shape for carrying a payload,” Priya said. “They inhabit every major oceanic area of the world and are capable of withstanding a wide range of temperatures and in fresh and salt waters. Most species are found in shallow coastal waters, but some have been found in depths 7,000 meters below sea level.” 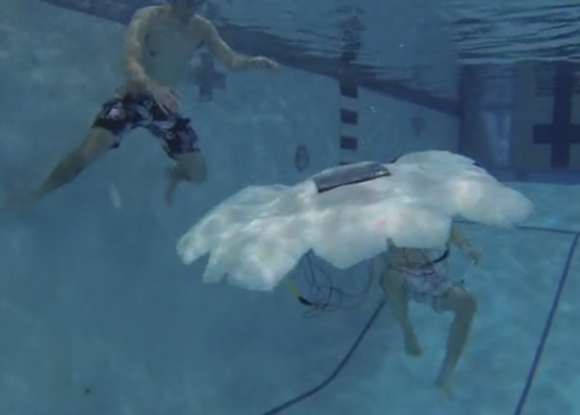 Several sizes of the RoboJelly are under various phases of development, some the size of a man’s hand, while another is more than five-foot wide. The latter robotic creature is too large for the lab tank and is tested in a swimming pool, and is not yet ready for wide public debut, said Priya, director of the Center for Energy Harvesting Materials and Systems.

Priya added that, in addition to a range of sizes, jellyfish display a wide variety of shapes and colors, and are able to move on their own vertically, but depend upon ocean currents for horizontal movement. With no central nervous system, jellyfish instead use a diffused nerve net to control movement and can complete complex functions. “So far, our focus has been using the experimental models to understand the fundamental principles of nature,” Priya said of the jellyfish.

The idea for a robotic jellyfish did not originate at Virginia Tech, but rather the U.S. Naval Undersea Warfare Center and the Office of Naval Research. Virginia Tech, is teaming with four U.S. universities on the multi-year, $5 million project: University of Texas at Dallas is handling nanotechnology based actuators and sensors; Providence College in Rhode Island is handling biological studies, University of California, Los Angeles, is handling electrostatic and optical sensing/controls, and Stanford University is overseeing chemical and pressure sensing. Virginia Tech is building the jellyfish body models, integrating fluid mechanics and developing control systems. Several other major U.S. universities and industries also are on the project, as well as collaborators and advisory board members.

The project has been in the works for nearly four years now and has garnered much attention from media outlets from The Los Angeles Times to Popular Science to New Scientist and several marine-related trade publications. Several more years of work remain on the project before any models are released for military reconnaissance or object-tracking operations, be it with cameras, sensors, or other devices.

Other entrepreneurial uses abound for the RoboJelly. “The robots could be used to study aquatic life, map ocean floors, monitor ocean currents, monitor water quality, [or to] monitor sharks,” said Alex Villanueva of St-Jacques, New-Brunswick, Canada, a doctoral student in mechanical engineering working under Priya. Other ideas: Detecting ocean pollutants, to, possibly, being used as clean-up filters during another oil spill similar to the Deepwater Horizon melee during the summer of 2010 in the Gulf of Mexico.

“The interesting part of the jellyfish research is that it is so open. No one had done research on a jellyfish vehicle to the extend we have. This allows for a lot of freedom and creativity in our design as opposed to optimization type of work which can be very boring,” said Villanueva.

The smaller models are being developed to be powered by hydrogen, naturally abundant in water, which is a huge step in autonomous craft. The larger models may be operated by electric batteries built into the robotic creature. In both cases, the jellyfish must be able to operate on their own for months or longer at a time as engineers likely won’t be able to capture and repair the robots, or replace power sources, Priya said.

“Our biologists have been studying tens of different species of jellyfish with variety of form factors grouped as ‘prolate’ or ‘oblate’ found all around the world,” Priya said. “Most of these species adopt either rowing or jetting form of propulsion. We are investigating both these propulsion mechanisms.”

“It’s very exciting when everything comes together and we can create experimental models that can surpass millions of years of evolution,” he said. “Nature has done great job in designing propulsion systems but it is slow and tedious process. On the other hand, current status of technology allows us to create high performance systems in matter of few months.”