At team of astrophysicists says it has shown, for the first time, that high-energy light emission is not only possible, but inevitable when gas is drawn into a black hole.

It is a mystery that has stymied astrophysicists for decades: how do black holes produce so many high-power X-rays? In a new study, astrophysicists from Johns Hopkins University, NASA and the Rochester Institute of Technology conducted research that bridges the gap between theory and observation by demonstrating that gas spiraling toward a black hole inevitably results in X-ray emissions.

The paper states that as gas spirals toward a black hole through a formation called an accretion disk, it heats up to roughly 10 million degrees Celsius. The temperature in the main body of the disk is roughly 2,000 times hotter than the sun and emits low-energy or “soft” X-rays. However, observations also detect “hard” X-rays which produce up to 100 times higher energy levels.

Julian Krolik, professor of physics and astronomy in the Zanvyl Krieger School of Arts and Sciences, and his fellow scientists used a combination of supercomputer simulations and traditional hand-written calculations to uncover their findings. Supported by 40 years of theoretical progress, the team showed for the first time that high-energy light emission is not only possible, but is an inevitable outcome of gas being drawn into a black hole.

“Black holes are truly exotic, with extraordinarily high temperatures, incredibly rapid motions and gravity exhibiting the full weirdness of general relativity,” Krolik said. “But our calculations show we can understand a lot about them using only standard physics principles.”

The team’s work was recently published in the print edition of Astrophysical Journal. His collaborators on the study include Jeremy Schnittman, a research astrophysicist from the NASA Goddard Space Flight Center, and Scott Noble, an associate research scientist from the Center for Computational Relativity and Gravitation at RIT. Schnittman was lead author. 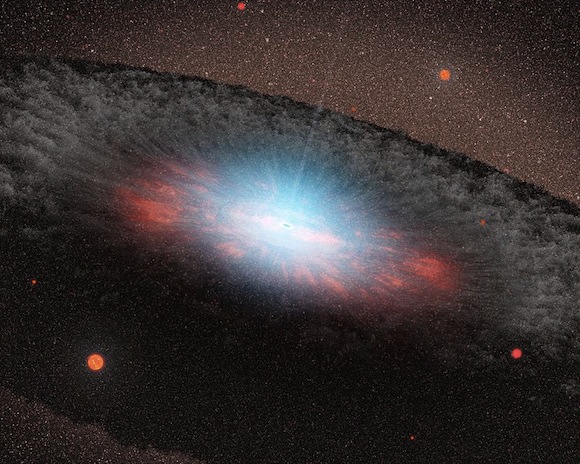 As the quality and quantity of the high-energy light observations improved over the years, evidence mounted showing that photons must be created in a hot, tenuous region called the corona. This corona, boiling violently above the comparatively cool disk, is similar to the corona surrounding the sun, which is responsible for much of the ultra-violet and X-ray luminosity seen in the solar spectrum.

While the team’s study of black holes and high-energy light confirms a widely-held belief, the role of advancing modern technology should not be overlooked. A grant from the National Science Foundation enabled the team to access Ranger, a supercomputing system at the Texas Advanced Computing Center located at the University of Texas in Austin. Ranger worked over the course of about 27 days, over 600 hours, to solve the equations.

Noble developed the computer simulation solving all of the equations governing the complex motion of inflowing gas and its associated magnetic fields near an accreting black hole. The rising temperature, density and speed of the inflowing gas dramatically amplify magnetic fields threading through the disk, which then exert additional influence on the gas.

The result is a turbulent froth orbiting the black hole at speeds approaching the speed of light. The calculations simultaneously tracked the fluid, electrical and magnetic properties of the gas while also taking into account Einstein’s theory of relativity.

“In some ways, we had to wait for technology to catch up with us,” Krolik said. “It’s the numerical simulations going on at this level of quality and resolution that make the results credible.”