The Carolina hammerhead had long eluded discovery because it is outwardly indistinguishable from the common scalloped hammerhead. 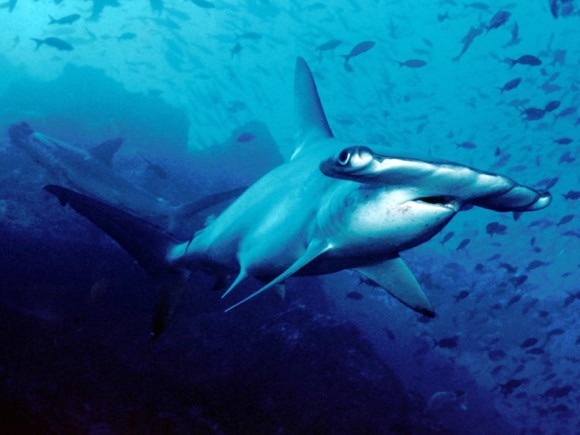 Discovering a new species is, among biologists, akin to hitting a grand slam, and University of South Carolina ichthyologist Joe Quattro led a team that recently cleared the bases. In the journal Zootaxa, they describe a rare shark, the Carolina hammerhead, that had long eluded discovery because it is outwardly indistinguishable from the common scalloped hammerhead. Through its rarity, the new species, Sphyrna gilberti, underscores the fragility of shark diversity in the face of relentless human predation.

Quattro, a biology professor in USC’s College of Arts and Sciences, didn’t set out to discover a new cryptic species, let alone one found exclusively in saltwater. When he started as an assistant professor at USC in 1995, he was largely focused on fish in the freshwater rivers that flow through the state before emptying into the western Atlantic Ocean.

He has wide interests that include conservation, genetic diversity and taxonomy. A driving force in his scientific curiosity is a desire to better understand evolution. As it turns out, South Carolina’s four major river basins — the Pee Dee, the Santee, the Edisto and the Savannah — are a source of particularly rich ore for mining insight into evolutionary history.

Quattro grew up in Maryland, earned a doctorate at Rutgers University in New Jersey, and completed a post-doc at Stanford University. “New Jersey and Maryland, in particular, had huge glacial influences,” said Quattro. “The areas where rivers now flow were covered with glaciers until 10,000 to 15,000 years ago, and as the glaciers receded the taxa followed them upstream.”

In contrast, rivers south of Virginia were not covered with glaciers. “In other words, these rivers have been around for quite some time,” Quattro said. “The Pee Dee and the Santee are two of the largest river systems on the East coast. And we just got curious — how distinct are these rivers from one another?”

Beginning with the pygmy sunfish, Quattro and colleagues examined the genetic makeup of fish species within the ancient freshwater drainage systems. They found the banded pygmy sunfish in all the South Carolina rivers — in fact, this widespread species is found in nearly all the river systems of the U.S. southeastern and Gulf coasts, starting from the plains of North Carolina, around Florida, and all the way to and up the Mississippi River.

From an evolutionary standpoint, it’s a noteworthy finding. These rare species are related to the widespread species, yet the details of the inter-relationships — such as which predates the others and is thus an ancestral species — still defy ready description. The fact that a rare and a common species are located together in an ancient river system is important information in the ongoing struggle to clearly define evolutionary history. In the past, scientists drew taxonomic charts almost solely on the basis of physical structure (morphology) and available fossils. The genetic data revolution of recent decades is helping redefine biology in a much more precise manner, but the process is still in the early going.

From the river to the sea

Quattro has been doing his part by slowly moving down the river systems to the ocean, collecting genetic data the whole way down. In the freshwater rivers, he has examined pygmy sunfishes, other sunfishes and basses. Closer to the sea, he has looked at short-nosed sturgeon, which spend most of their time in the estuary (where the river meets the ocean), but do venture up the river to spawn. And further downriver still, he has looked at shark pups.

South Carolina is a well-known pupping ground for several species of sharks, including the hammerhead. The female hammerhead will birth her young at the ocean-side fringes of the estuary; the pups remain there for a year or so, growing, before moving out to the ocean to complete their life cycle.

In the process of looking at hammerheads, Quattro, his student William Driggers III and their colleagues quickly uncovered an anomaly. The scalloped hammerheads (Sphyrna lewini) that they were collecting had two different genetic signatures, in both the mitochondrial and nuclear genomes. Searching the literature, they found that Carter Gilbert, the renowned curator of the Florida Museum of Natural History from 1961 to 1998, had described an anomalous scalloped hammerhead in 1967 that had 10 fewer vertebrae than S. lewini. It had been caught near Charleston and, because the sample was in the National Museum of Natural History, the team was able to examine it morphologically and suggest that it constituted a cryptic species — that is, one that is physically nearly indistinguishable from the more common species.

After publishing the preliminary genetic evidence for the new, cryptic species in the journal Marine Biology in 2006, Quattro and colleagues followed up by making thorough measurements (of 54 cryptic individuals and 24 S. lewini) to fully describe in Zootaxa the new species, S. gilberti, named in Gilbert’s honor. The difference in vertebrae, 10 fewer in the cryptic species, is the defining morphological difference.

Apart from the satisfaction of discovery, Quattro has established locations and genetic signatures for a number of closely related, yet distinct, species in South Carolina’s rivers, estuaries and coastal waters. The results will go a long way in furthering efforts to accurately define taxonomy and evolutionary history for aquatic life.

His team’s work also demonstrates the rarity of the new species. “Outside of South Carolina, we’ve only seen five tissue samples of the cryptic species,” Quattro said. “And that’s out of three or four hundred specimens.”

Shark populations have greatly diminished over the past few decades. “The biomass of scalloped hammerheads off the coast of the eastern U.S. is less than 10 percent of what it was historically,” Quattro said. “Here, we’re showing that the scalloped hammerheads are actually two things. Since the cryptic species is much rarer than the lewini, God only knows what its population levels have dropped to.”

Via University of South Carolina