An international team of nuclear astrophysicists has shed new light on the explosive stellar events known as novae. 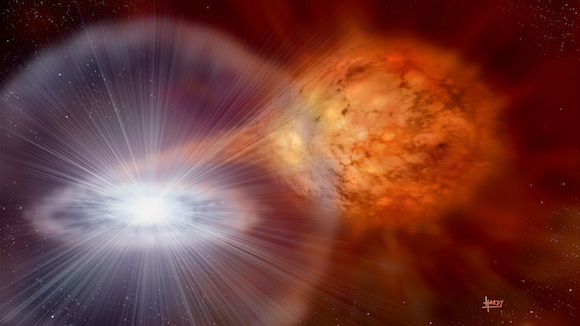 These dramatic explosions are driven by nuclear processes and make previously unseen stars visible for a short time. The team of scientists measured the nuclear structure of the radioactive neon produced through this process in unprecedented detail.

Their findings, reported in the US journal Physical Review Letters, show there is much less uncertainty in how quickly one of the key nuclear reactions will occur as well as in the final abundance of radioactive isotopes than has previously been suggested.

Led by the University of York, UK, and Universitat Politècnica de Catalunya and the Institut d’Estudis Espacials de Catalunya, Spain, the findings will help with the interpretation of future data from gamma ray observing satellites. 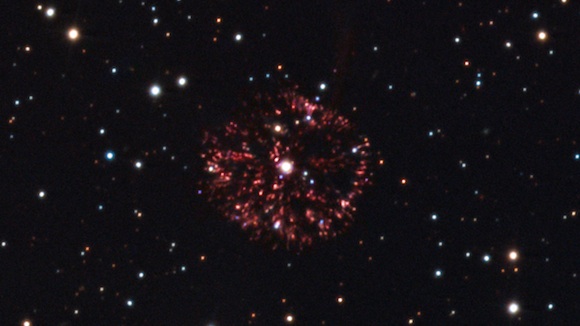 GK Persei 1901 – view of the ejecta a century after the nova explosion. Image Credit: Adam Block/NOAO/AURA/NSF.

A nova occurs when a white dwarf is close enough to a companion star to drag matter – mostly hydrogen and helium – from the outer layers of that star onto itself, building up an envelope. When enough material has accumulated on the surface, a burst of nuclear fusion occurs, causing the white dwarf to brighten and expel the remaining material. Within a few days to months, the glow subsides. The phenomenon is expected to recur after typically 10,000 to 100,000 years.

Traditionally novae are observed in the visible and nearby wavelengths, but this emission only shows up about a week after the explosion and therefore only gives partial information on the event.

Dr Alison Laird, from the University of York’s Department of Physics, said: “The explosion is fundamentally driven by nuclear processes. The radiation related to the decay of isotopes – in particular that from an isotope of fluorine – is actively being sought by current and future gamma ray observing satellite missions as it provides direct insight into the explosion.

“However, to be interpreted correctly, the nuclear reaction rates involved in the production of the fluorine isotope must be known. We have demonstrated that previous assumptions about key nuclear properties are incorrect and have improved our knowledge of the nuclear reaction pathway.”

The experimental work was carried out at the Maier-Leibnitz Laboratory in Garching, Germany, and scientists from the University of Edinburgh played a key role in the interpretation of the data. The study also involved scientists from Canada and the United States.

Dr Anuj Parikh, from the Departament de Fisica i Enginyeria Nuclear at the Universitat Politècnica de Catalunya, said: “The observation of gamma-rays from novae would help to better determine exactly what chemical elements are synthesized in these astrophysical explosions. In this work, details required to calculate the production of the key radioactive fluorine isotope have been measured precisely. This will allow more detailed investigation of the processes and reactions behind the nova.”

This work is part of an ongoing programme of research studying how the elements are synthesised in stars and stellar explosions.

Via University of York