NASA’s Van Allen Probes mission has discovered a previously unknown third radiation belt around Earth, revealing the existence of unexpected structures and processes within these hazardous regions of space.

Here’s a short video about it: New ring discovered in Earth’s radiation belts

The belts, named for their discoverer, James Van Allen, are critical regions for modern society, which is dependent on many space-based technologies. The Van Allen belts are affected by solar storms and space weather and can swell dramatically. When this occurs, they can pose dangers to communications and GPS satellites, as well as humans in space. 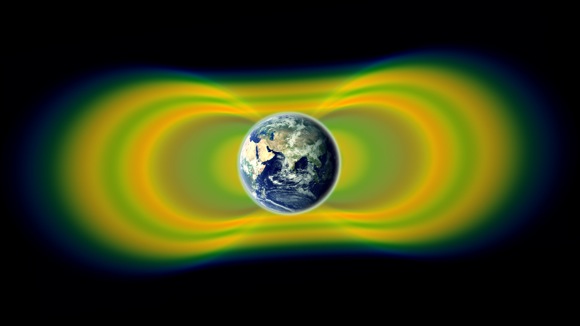 Two giant swaths of radiation, known as the Van Allen Belts, surrounding Earth were discovered in 1958. In 2012, observations from the Van Allen Probes showed that a third belt can sometimes appear. The radiation is shown here in yellow, with green representing the spaces between the belts. Credit: NASA/Van Allen Probes/Goddard Space Flight Center

“The fantastic new capabilities and advances in technology in the Van Allen Probes have allowed scientists to see in unprecedented detail how the radiation belts are populated with charged particles and will provide insight on what causes them to change, and how these processes affect the upper reaches of Earth’s atmosphere,” said John Grunsfeld, NASA’s associate administrator for science in Washington.

This discovery shows the dynamic and variable nature of the radiation belts and improves our understanding of how they respond to solar activity. The findings, published Thursday in the journal Science, are the result of data gathered by the first dual-spacecraft mission to fly through our planet’s radiation belts.

The new high-resolution observations by the Relativistic Electron Proton Telescope (REPT) instrument, part of the Energetic Particle, Composition, and Thermal Plasma Suite (ECT) aboard the Van Allen Probes, revealed there can be three distinct, long-lasting belt structures with the emergence of a second empty slot region, or space, in between. 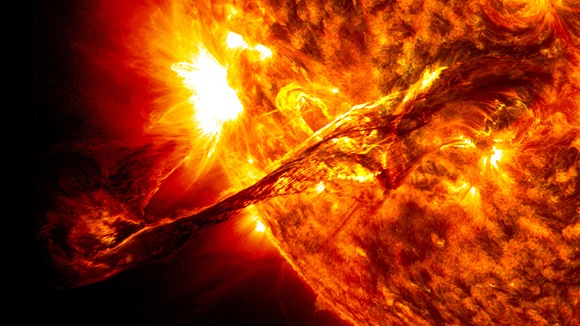 On Aug. 31, 2012, a giant prominence on the sun erupted, sending out particles and a shock wave that traveled near Earth. This event may have been one of the causes of a third radiation belt that appeared around Earth a few days later, a phenomenon that was observed for the very first time by the newly-launched Van Allen Probes. This image of the prominence before it erupted was captured by NASA’s Solar Dynamics Observatory (SDO). Credit: NASA/SDO/AIA/Goddard Space Flight Center

“This is the first time we have had such high-resolution instruments look at time, space and energy together in the outer belt,” said Daniel Baker, lead author of the study and REPT instrument lead at the Laboratory for Atmospheric and Space Physics (LASP) at the University of Colorado in Boulder. “Previous observations of the outer radiation belt only resolved it as a single blurry element. When we turned REPT on just two days after launch, a powerful electron acceleration event was already in progress, and we clearly saw the new belt and new slot between it and the outer belt.”

Scientists observed the third belt for four weeks before a powerful interplanetary shock wave from the sun annihilated it. Observations were made by scientists from institutions including LASP; NASA’s Goddard Space Flight Center in Greenbelt, Md.; Los Alamos National Laboratory in Los Alamos, N.M.; and the Institute for the Study of Earth, Oceans, and Space at the University of New Hampshire in Durham.

Each Van Allen Probe carries an identical set of five instrument suites that allow scientists to gather data on the belts in unprecedented detail. The data are important for the study of the effect of space weather on Earth, as well as fundamental physical processes observed around other objects, such as planets in our solar system and distant nebulae.

“Even 55 years after their discovery, the Earth’s radiation belts still are capable of surprising us and still have mysteries to discover and explain,” said Nicky Fox, Van Allen Probes deputy project scientist at the Johns Hopkins University Applied Physics Laboratory in Laurel, Md. “We thought we knew the radiation belts, but we don’t. The advances in technology and detection made by NASA in this mission already have had an almost immediate impact on basic science.”

The Van Allen Probes are the second mission in NASA’s Living With a Star Program to explore aspects of the connected sun-Earth system that directly affect life and society. Goddard manages the program. The Applied Physics Laboratory built the spacecraft and manages the mission for NASA.