Light from the darkness

An evocative new image from ESO shows a dark cloud where new stars are forming, along with a cluster of brilliant stars that have already emerged from their dusty stellar nursery.

On the left of this new image there is a dark column resembling a cloud of smoke. To the right shines a small group of brilliant stars. At first glance these two features could not be more different, but they are in fact closely linked. The cloud contains huge amounts of cool cosmic dust and is a nursery where new stars are being born. It is likely that the Sun formed in a similar star formation region more than four billion years ago. 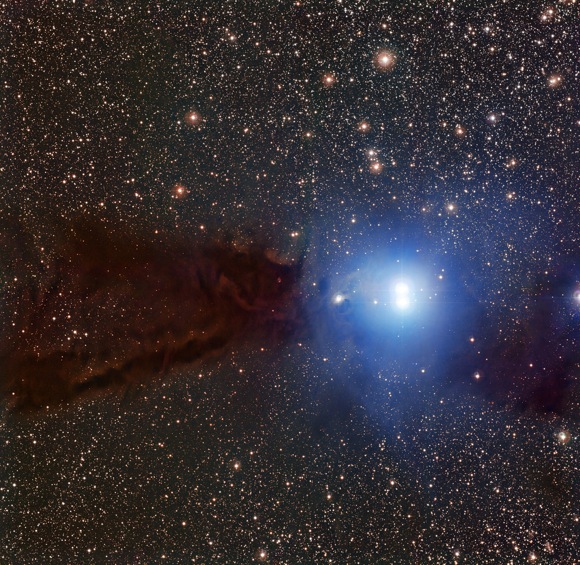 This cloud is known as Lupus 3 and it lies about 600 light-years from Earth in the constellation of Scorpius (The Scorpion). The section shown here is about five light-years across.

As the denser parts of such clouds contract under the effects of gravity they heat up and start to shine. At first this radiation is blocked by the dusty clouds and can only be seen by telescopes observing at longer wavelengths than visible light, such as the infrared. But as the stars get hotter and brighter their intense radiation and stellar winds gradually clear the clouds around them until they emerge in all their glory.

The bright stars right of the centre of this new picture form a perfect example of a small group of such hot young stars. Some of their brilliant blue light is being scattered off the remaining dust around them. The two brightest stars are bright enough to be seen easily with a small telescope or binoculars. They are young stars that have not yet started to shine by nuclear fusion in their cores and are still surrounded by glowing gas [1]. They are probably less than one million years old. 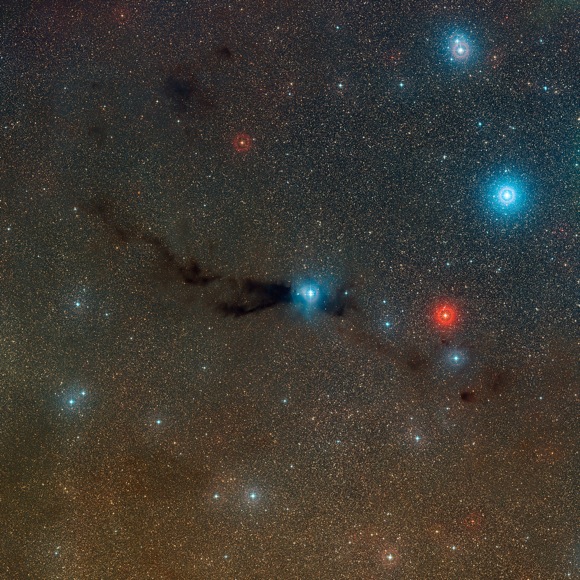 This wide-field view shows a dark cloud where new stars are forming along with cluster of brilliant stars that have already burst out of their dusty stellar nursery. Credit:ESO/Digitized Sky Survey 2. Acknowledgement: Davide De Martin

Although they are less obvious at first glance than the bright blue stars, surveys have found many other very young stellar objects in this region, which is one of the closest such stellar nurseries to the Sun.

Star formation regions can be huge, such as the Tarantula Nebula (eso0650) where hundreds of massive stars are being formed. However, most of the stars in our and other galaxies are thought to have formed in much more modest regions like the one shown here, where only two bright stars are visible and no very heavy stars are formed. For this reason, the Lupus 3 region is both fascinating for astronomers and a beautiful illustration of the early stages of the life of stars.