The NASA/ESA Hubble Space Telescope has produced this vivid image of a pair of interacting galaxies known as Arp 142.

When two galaxies stray too close to each other they begin to interact, causing spectacular changes in both objects. In some cases the two can merge — but in others, they are ripped apart.

Just below the centre of this image is the blue, twisted form of galaxy NGC 2936, one of the two interacting galaxies that form Arp 142 in the constellation of Hydra. Nicknamed “the Penguin” or “the Porpoise” by amateur astronomers, NGC 2936 used to be a standard spiral galaxy before being torn apart by the gravity of its cosmic companion. 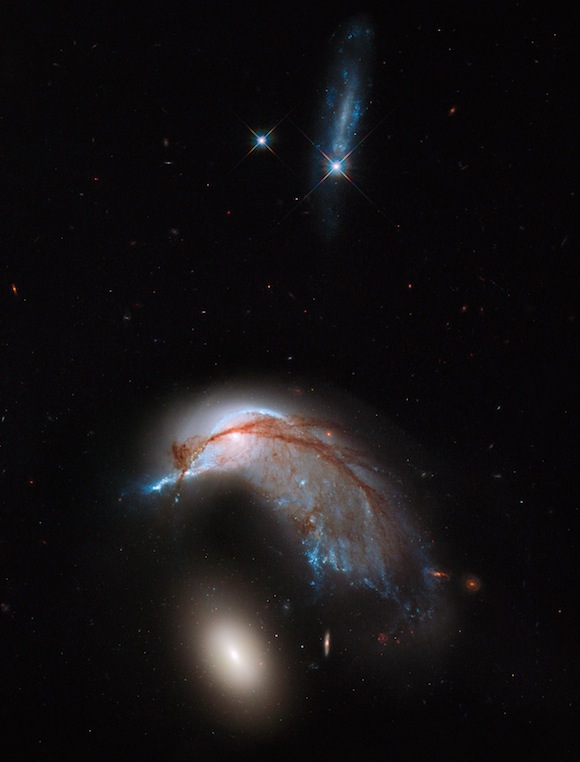 This image shows the two galaxies interacting. NGC 2936, once a standard spiral galaxy, and NGC 2937, a smaller elliptical, bear a striking resemblance to a penguin guarding its egg. This image is a combination of visible and infrared light, created from data gathered by the NASA/ESA Hubble Space Telescope Wide Field Planetary Camera 3 (WFC3).

The remnants of its spiral structure can still be seen — the former galactic bulge now forms the “eye” of the penguin, around which it is still possible to see where the galaxy’s pinwheeling arms once were. These disrupted arms now shape the cosmic bird’s “body” as bright streaks of blue and red across the image. These streaks arch down towards NGC 2936’s nearby companion, the elliptical galaxy NGC 2937, visible here as a bright white oval. The pair show an uncanny resemblance to a penguin safeguarding its egg.

The effects of gravitational interaction between galaxies can be devastating. The Arp 142 pair are close enough together to interact violently, exchanging matter and causing havoc.

In the upper part of the image are two bright stars, both of which lie in the foreground of the Arp 142 pair. One of these is surrounded by a trail of sparkling blue material, which is actually another galaxy. This galaxy is thought to be too far away to play a role in the interaction — the same is true of the galaxies peppered around the body of NGC 2936. In the background are the blue and red elongated shapes of many other galaxies, which lie at vast distances from us — but which can all be seen by the sharp eye of Hubble. 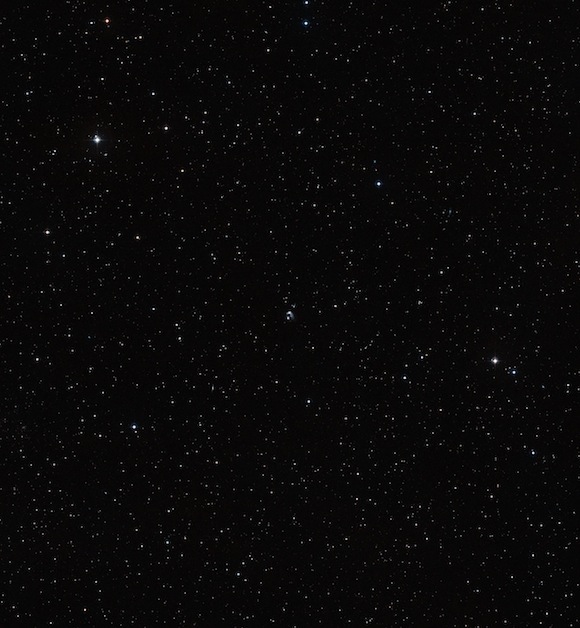 This image from the Digitized Sky Survey shows the area around a pair of merging galaxies known as Arp 142 in the constellation of Hydra. This pair is made up of once-spiral galaxy NGC 2936, and elliptical galaxy NGC 2937.

This pair of galaxies is named after the American astronomer Halton Arp, the creator of the Atlas of Peculiar Galaxies, a catalogue of weirdly-shaped galaxies that was originally published in 1966. Arp compiled the catalogue in a bid to understand how galaxies evolved and changed shape over time, something he felt to be poorly understood. He chose his targets based on their strange appearances, but astronomers later realised that many of the objects in Arp’s catalogue were in fact interacting and merging galaxies [1].

This image is a combination of visible and infrared light, created from data gathered by the NASA/ESA Hubble Space Telescope Wide Field Planetary Camera 3 (WFC3).

[1] The birth and evolution of various sets of merging galaxies was the subject of the book Cosmic Collisions – The Hubble Atlas of Merging Galaxies, produced by Springer and the European Southern Observatory. The book is illustrated with a range of stunning Hubble Space Telescope images.