This new picture celebrates an important anniversary for the Very Large Telescope – it is fifteen years since the first light on the first of its four Unit Telescopes, on 25 May 1998.

Since then the four original giant telescopes have been joined by the four small Auxiliary Telescopes that form part of the VLT Interferometer (VLTI). The VLT is one of the most powerful and productive ground-based astronomical facilities in existence. In 2012 more than 600 refereed scientific papers based on data from the VLT and VLTI were published (ann13009). 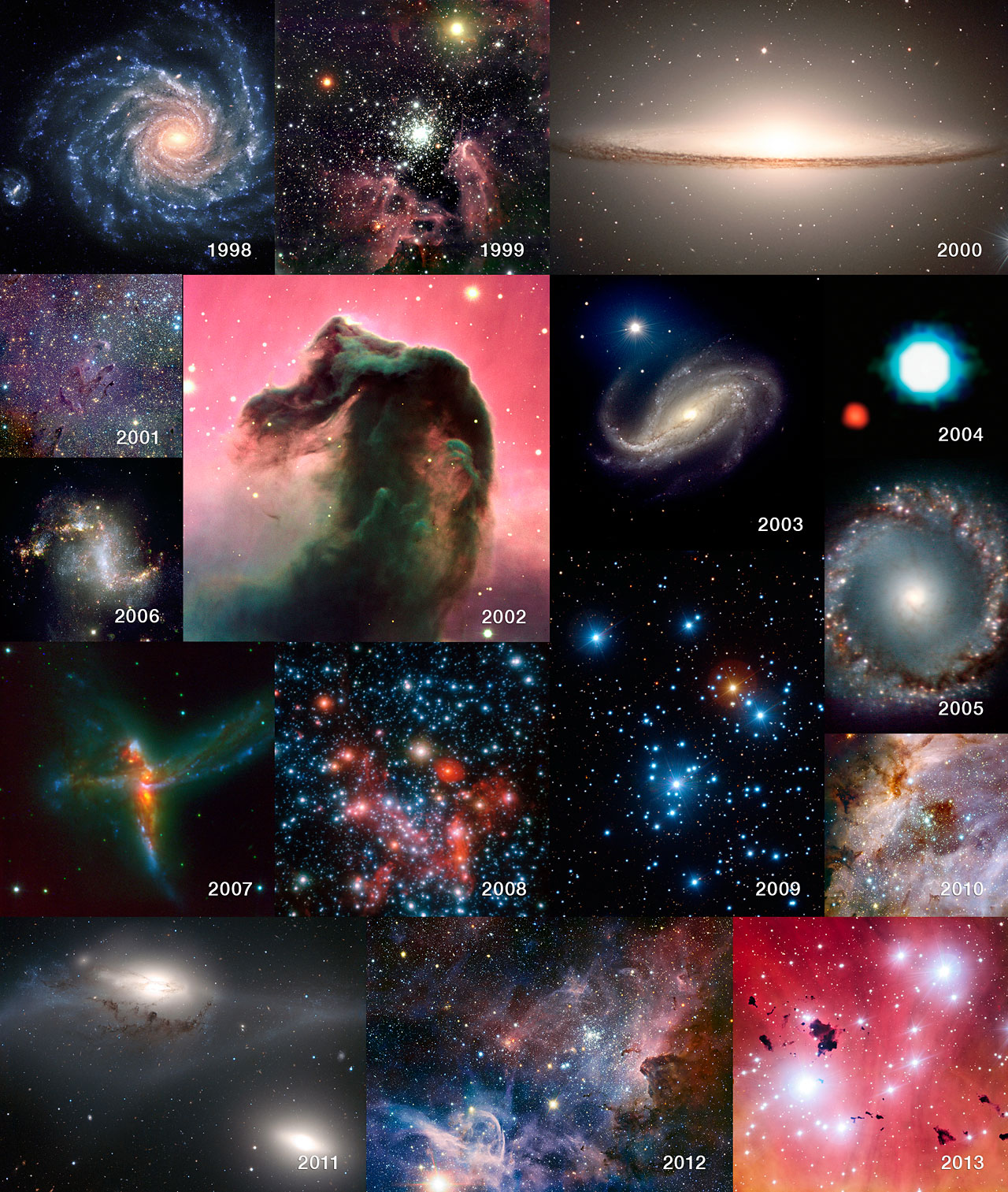 Interstellar clouds of dust and gas are the nurseries where new stars are born and grow. The new picture shows one of them, IC 2944, which appears as the softly glowing pink background [1]. This image is the sharpest view of the object ever taken from the ground [2]. The cloud lies about 6500 light-years away in the southern constellation of Centaurus (The Centaur). This part of the sky is home to many other similar nebulae that are scrutinised by astronomers to study the mechanisms of star formation.

Emission nebulae like IC 2944 are composed mostly of hydrogen gas that glows in a distinctive shade of red, due to the intense radiation from the many brilliant newborn stars. Clearly revealed against this bright backdrop are mysterious dark clots of opaque dust, cold clouds known as Bok globules. They are named after the Dutch-American astronomer Bart Bok, who first drew attention to them in the 1940s as possible sites of star formation. This particular set is nicknamed the Thackeray Globules [3]. 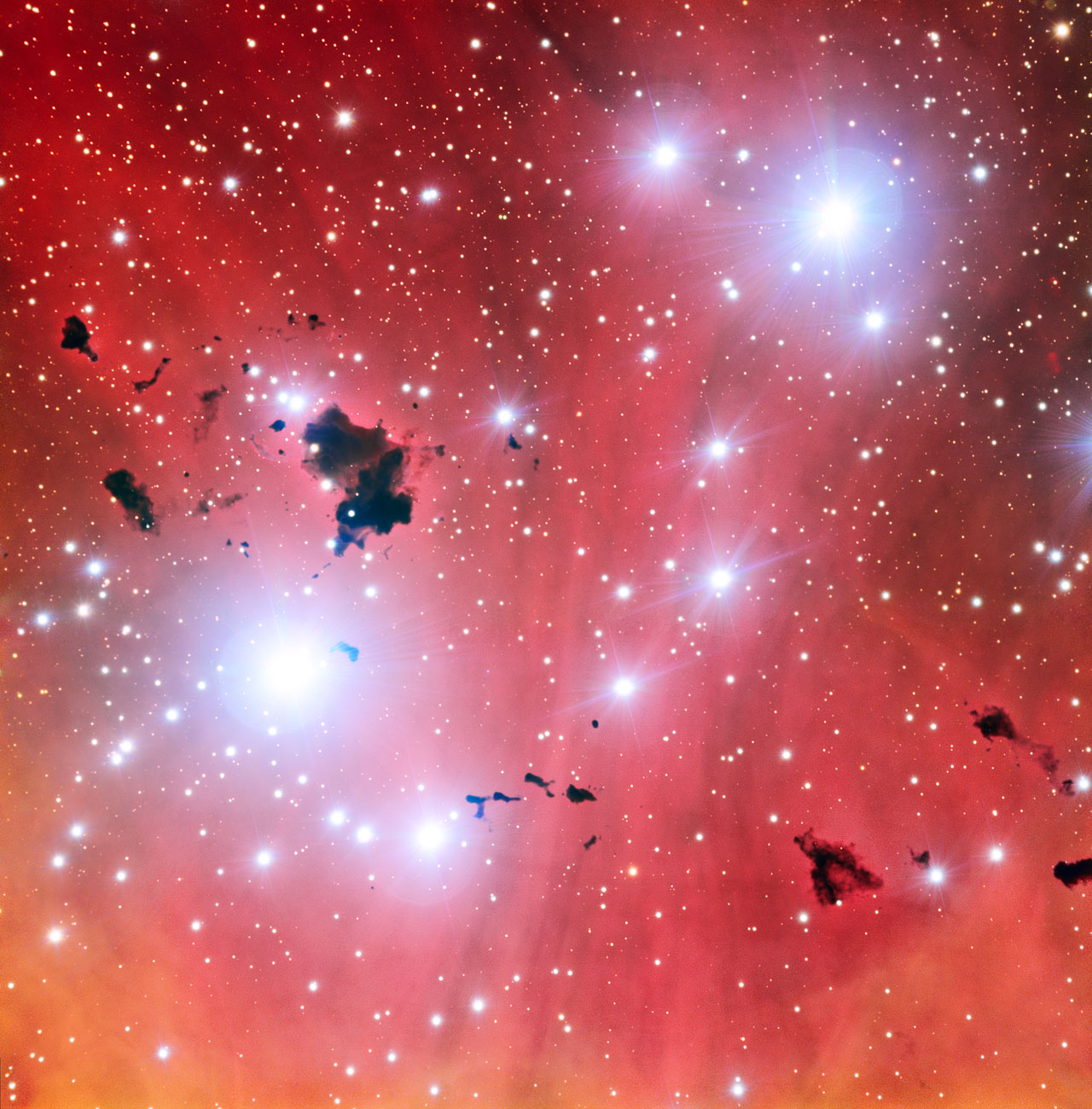 View Larger | This intriguing new view of a spectacular stellar nursery IC 2944 is being released to celebrate a milestone: 15 years of ESO’s Very Large Telescope. This image also shows a group of thick clouds of dust known as the Thackeray globules silhouetted against the pale pink glowing gas of the nebula.

Larger Bok globules in quieter locations often collapse to form new stars but the ones in this picture are under fierce bombardment from the ultraviolet radiation from nearby hot young stars. They are both being eroded away and also fragmenting, rather like lumps of butter dropped into a hot frying pan. It is likely that Thackeray’s Globules will be destroyed before they can collapse and form stars.

Bok globules are not easy to study. As they are opaque to visible light it is difficult for astronomers to observe their inner workings, and so other tools are needed to unveil their secrets — observations in the infrared or in the submillimetre parts of the spectrum, for example, where the dust clouds, only a few degrees over absolute zero, appear bright. Such studies of the Thackeray globules have confirmed that there is no current star formation within them. 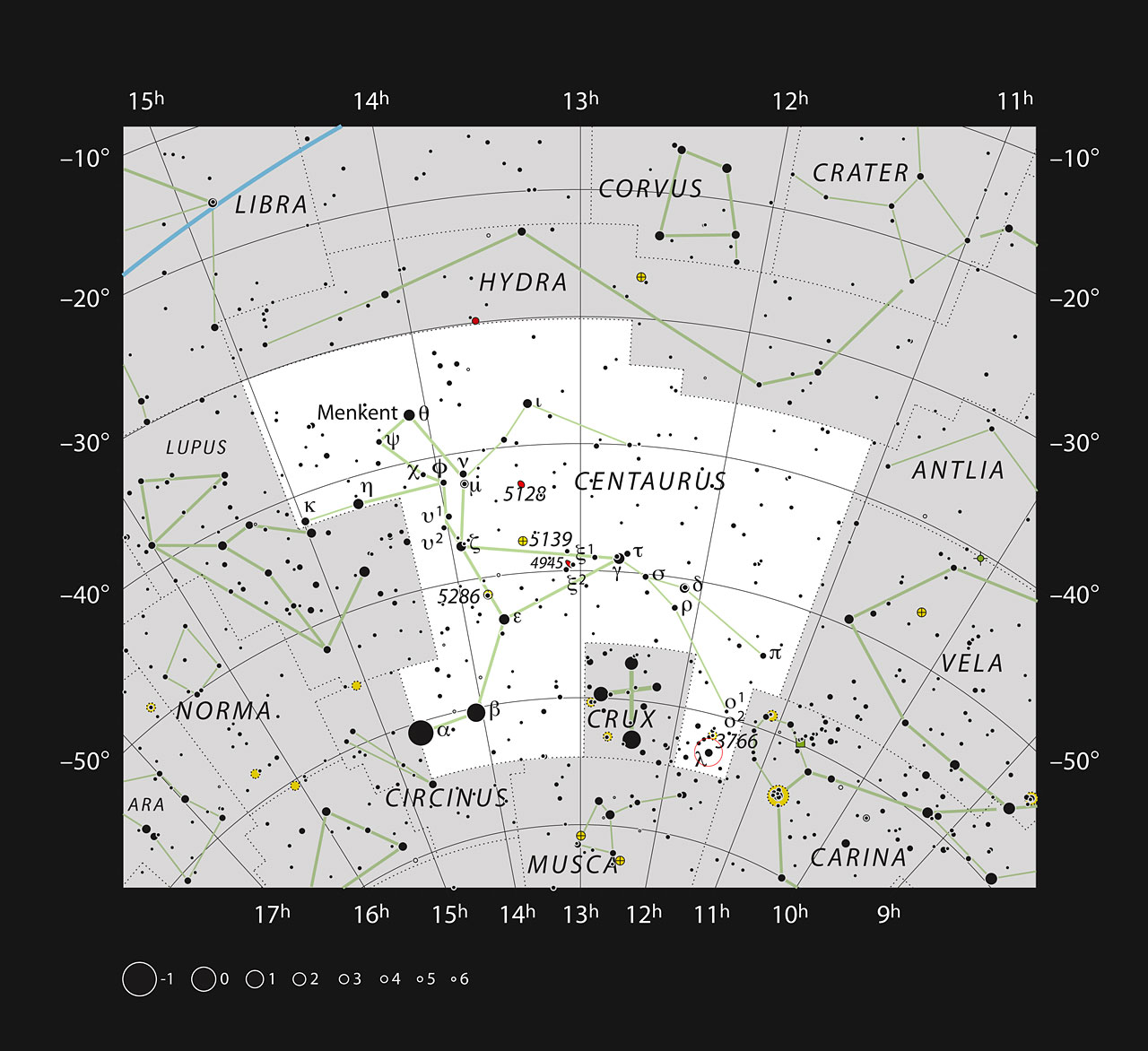 View Larger | This chart shows the large southern constellation of Centaurus (The Centaur). Most of the stars that can be seen in a dark sky with the unaided eye are marked. The locations of the star formation region IC 2944 and the associated star cluster IC 2948 are indicated with a red circle. The cluster is easy to see in a small telescope, but the very faint gas clouds are much more of a challenge.

This region of sky has also been imaged in the past by the NASA/ESA Hubble Space Telescope (opo0201a). This new view from the FORS instrument on ESO’s Very Large Telescope at the Paranal Observatory in northern Chile [4] covers a wider patch of sky than Hubble and shows a broader landscape of star formation.
Notes

[2] The seeing of the blue image in this colour combination was better than 0.5 arcseconds, exceptionally good for a ground-based telescope.

[3] They were discovered from South Africa by the English astronomer A. David Thackeray in 1950.

[4] This picture comes from the ESO Cosmic Gems programme, an outreach initiative to produce images of interesting, intriguing or visually attractive objects using ESO telescopes, for the purposes of education and public outreach. The programme makes use of telescope time that cannot be used for science observations. All data collected may also be suitable for scientific purposes, and are made available to astronomers through ESO’s science archive.