Two California scientists are unveiling their proposal for a system that could eliminate an asteroid threat.

As an asteroid roughly half as large as a football field — and with energy equal to a large hydrogen bomb — readies for a fly-by of Earth on Friday, two California scientists are unveiling their proposal for a system that could eliminate a threat of this size in an hour. The same system could destroy asteroids 10 times larger than the one known as 2012 DA14 in about a year, with evaporation starting at a distance as far away as the Sun.

UC Santa Barbara physicist and professor Philip M. Lubin, and Gary B. Hughes, a researcher and professor from California Polytechnic State University, San Luis Obispo, conceived DE-STAR, or Directed Energy Solar Targeting of Asteroids and exploRation, as a realistic means of mitigating potential threats posed to the Earth by asteroids and comets. 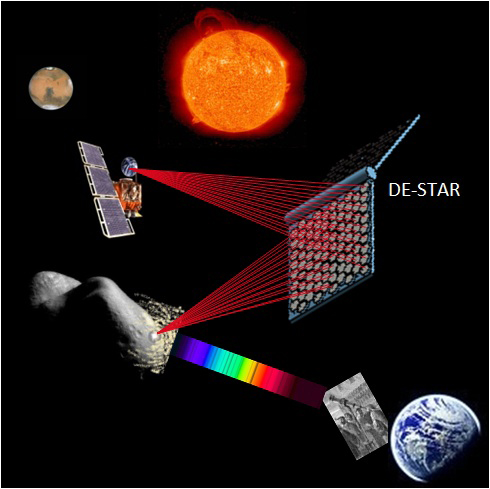 Concept drawing of the DE-STAR system engaging both an asteroid for evaporation or composition analysis, and simultaneously propelling an interplanetary spacecraft. Credit: Philip M. Lubin

“We have to come to grips with discussing these issues in a logical and rational way,” said Lubin, who began work on DE-STAR a year ago. “We need to be proactive rather than reactive in dealing with threats. Duck and cover is not an option. We can actually do something about it and it’s credible to do something. So let’s begin along this path. Let’s start small and work our way up. There is no need to break the bank to start.”

Described as a “directed energy orbital defense system,” DE-STAR is designed to harness some of the power of the Sun and convert it into a massive phased array of laser beams that can destroy, or evaporate, asteroids posing a potential threat to Earth. It is equally capable of changing an asteroid’s orbit — deflecting it away from Earth, or into the Sun — and may also prove to be a valuable tool for assessing an asteroid’s composition, enabling lucrative, rare-element mining. And it’s entirely based on current essential technology.

“This system is not some far-out idea from Star Trek,” Hughes said. “All the components of this system pretty much exist today. Maybe not quite at the scale that we’d need — scaling up would be the challenge — but the basic elements are all there and ready to go. We just need to put them into a larger system to be effective, and once the system is there, it can do so many things.”

The same system has a number of other uses, including aiding in planetary exploration.

In developing the proposal, Lubin and Hughes calculated the requirements and possibilities for DE-STAR systems of several sizes, ranging from a desktop device to one measuring 10 kilometers, or six miles, in diameter. Larger systems were also considered. The larger the system, the greater its capabilities.

For instance, DE-STAR 2 — at 100 meters in diameter, about the size of the International Space Station — “could start nudging comets or asteroids out of their orbits,” Hughes said. But DE-STAR 4 — at 10 kilometers in diameter, about 100 times the size of the ISS — could deliver 1.4 megatons of energy per day to its target, said Lubin, obliterating an asteroid 500 meters across in one year.

The speed of interplanetary travel — far beyond what is possible with chemical propellant rockets used today — could be increased with this sized system, according to Lubin. It could also power advanced ion drive systems for deep space travel, he said. Able to engage multiple targets and missions at once, DE-STAR 4 “could simultaneously evaporate an asteroid, determine the composition of another, and propel a spacecraft.”

Larger still, DE-STAR 6 could enable interstellar travel by functioning as a massive, orbiting power source and propulsion system for spacecraft. It could propel a 10-ton spacecraft at near the speed of light, allowing interstellar exploration to become a reality without waiting for science fiction technology such as “warp drive” to come along, Lubin said.

“Our proposal assumes a combination of baseline technology — where we are today — and where we almost certainly will be in the future, without asking for any miracles,” he explained. “We’ve really tried to temper this with a realistic view of what we can do, and we approached it from that point of view. It does require very careful attention to a number of details, and it does require a will to do so, but it does not require a miracle.”

Recent and rapid developments in highly efficient conversion of electrical power to light allow such a scenario now, Lubin said, when just 20 years ago it would not have been realistic to consider.

“These are not just back-of-the-envelope numbers,” Hughes concurred. “They are actually based on detailed analysis, through solid calculations, justifying what is possible. And it’s all available under current theory and current technology.

“There are large asteroids and comets that cross the Earth’s orbit, and some very dangerous ones going to hit the Earth eventually,” he added. “Many have hit in the past and many will hit in the future. We should feel compelled to do something about the risk. Realistic solutions need to be considered, and this is definitely one of those.”

Three UCSB undergraduate students are assisting Lubin and Hughes with the DE-STAR project: Johanna Bible and Jesse Bublitz, both from the College of Creative Studies, and chemistry major Joshua Arriola.