Best 3D map yet of central bulge of the Milky Way

Astronomers have found that our galaxy’s inner regions take on a peanut-like, or X-shaped, appearance from some angles.

Two groups of astronomers have used data from ESO telescopes to make the best three-dimensional map yet of the central parts of the Milky Way. They have found that the inner regions take on a peanut-like, or X-shaped, appearance from some angles. This odd shape was mapped by using public data from ESO’s VISTA survey telescope along with measurements of the motions of hundreds of very faint stars in the central bulge. 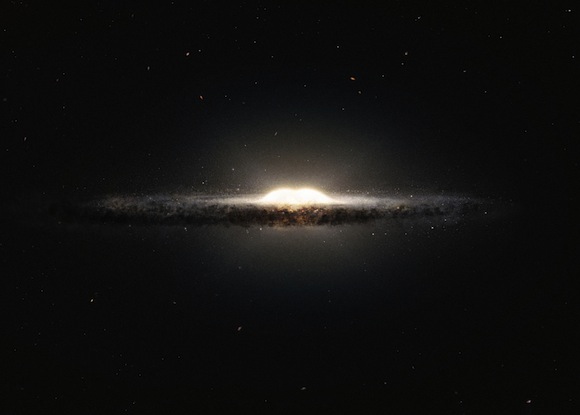 This artist’s impression shows how the Milky Way galaxy would look seen from almost edge on and from a very different perspective than we get from the Earth. The central bulge shows up as a peanut shaped glowing ball of stars and the spiral arms and their associated dust clouds form a narrow band. Credit: ESO/NASA/JPL-Caltech/M. Kornmesser/R. Hurt

One of the most important and massive parts of the galaxy is the galactic bulge. This huge central cloud of about 10 000 million stars spans thousands of light-years, but its structure and origin were not well understood.

Unfortunately, from our vantage point from within the galactic disc, the view of this central region — at about 27 000 light-years’ distance — is heavily obscured by dense clouds of gas and dust. Astronomers can only obtain a good view of the bulge by observing longer wavelength light, such as infrared radiation, which can penetrate the dust clouds. 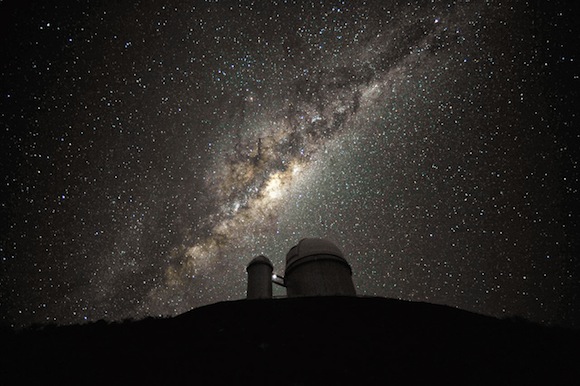 The Galactic Centre and Bulge above the ESO 3.6-metre telescope

The first group, from the Max Planck Institute for Extraterrestrial Physics (MPE) in Garching, Germany, used the VVV near-infrared survey [1] from the VISTA telescope at ESO’s Paranal Observatory in Chile (eso1101, eso1128, eso1141, eso1242, eso1309). This new public survey can pick up stars thirty times fainter than previous bulge surveys. The team identified a total of 22 million stars belonging to a class of red giants whose well-known properties allow their distances to be calculated [2].

“The depth of the VISTA star catalogue far exceeds previous work and we can detect the entire population of these stars in all but the most highly obscured regions,” explains Christopher Wegg (MPE), who is lead author of the first study. “From this star distribution we can then make a three-dimensional map of the galactic bulge.This is the first time that such a map has been made without assuming a model for the bulge’s shape.”

“We find that the inner region of our Galaxy has the shape of a peanut in its shell from the side, and of a highly elongated bar from above”, adds Ortwin Gerhard, the coauthor of the first paper and leader of the Dynamics Group at MPE [3]. “It is the first time that we can see this clearly in our own Milky Way, and simulations in our group and by others show that this shape is characteristic of a barred galaxy that started out as a pure disc of stars.”

The second international team, led by Chilean PhD student Sergio Vásquez (Pontificia Universidad Católica de Chile, Santiago, Chile and ESO, Santiago, Chile) took a different approach to pin down the structure of the bulge. By comparing images taken eleven years apart with the MPG/ESO 2.2-metre telescope they could measure the tiny shifts due to the motions of the bulge stars across the sky. These were combined with measurements of the motions of the same stars towards or away from the Earth to map out the motions of more than 400 stars in three dimensions [4]. 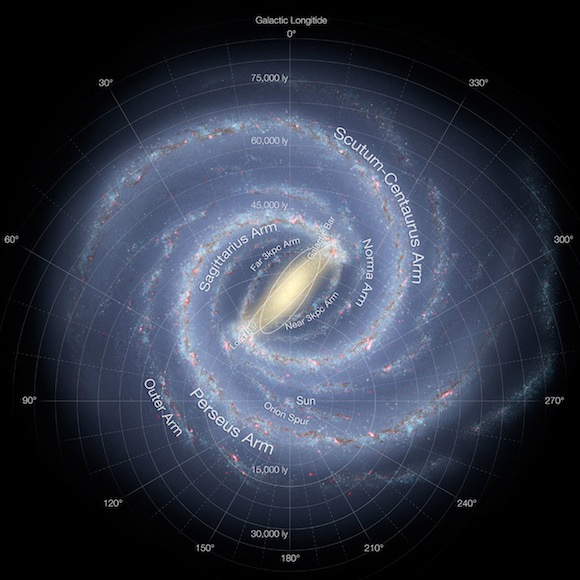 This detailed annotated artist’s impression shows the structure of the Milky Way, including the location of the spiral arms and other components such as the bulge. This version of the image has been updated to include the most recent mapping of the shape of the central bulge deduced from survey data from ESO’s VISTA telescope at the Paranal Observatory. Credit: NASA/JPL-Caltech/ESO/R. Hurt

“This is the first time that a large number of velocities in three dimensions for individual stars from both sides of the bulge been obtained,” concludes Vásquez. “The stars we have observed seem to be streaming along the arms of the X-shaped bulge as their orbits take them up and down and out of the plane of the Milky Way. It all fits very well with predictions from state-of-the-art models!”

The astronomers think that the Milky Way was originally a pure disc of stars which formed a flat bar billions of years ago [5]. The inner part of this then buckled to form the three-dimensional peanut shape seen in the new observations.

Notes
[1] VVV stands for VISTA Variables in the Via Lactea Survey. This is one of six large surveys being made by the VISTA telescope. The data from the VVV survey is made publicly available to the international science community through the ESO Science Archive Facility which enabled the study at MPE.

[2] Red clump giant stars were chosen for this study as they can be used as a standard candles: at this stage in the giant stars’ lifetimes their luminosity is approximately independent of their age or composition. The amount of gas and dust obscuring the stars is calculated directly from the observed colours of the red clump stars, so that their brightness distribution without obscuration can be measured. Then, because red clump stars have nearly the same intrinsic brightness, this gives approximate distances to each star. The good spatial coverage of the VVV survey allowed measurements across the whole inner region of the Milky Way, and from these the three-dimensional measurement of the structure of the bulge was constructed.

[3] Similar peanut structures have been observed in the bulges of other galaxies and their formation has been predicted from computer simulations, which show that the peanut shape is formed by stars in orbits that form an X-shaped structure.

[4] The observations of these radial velocities were made using the FLAMES-GIRAFFE spectrograph on ESO’s Very Large Telescope and the IMACS spectrograph at the Las Campanas Observatory.

[5] Many galaxies, including the Milky Way, have long narrow features across their central regions, which are known as bars.