When closest to the sun, Phaethon may become so hot that rocks on the surface crack and crumble to dust. This makes Phaethon a “rock comet.”

The sun-grazing object, 3200 Phaethon – parent object of the much-loved December Geminid meteor shower – has betrayed its true nature by showing a comet-like tail, according to astronomers. Phaethon’s tail of dust particles has been seen blowing backwards by radiation pressure from the sun. Unlike a comet, however, Phaethon’s tail doesn’t arise through the vaporization of an icy nucleus. During its closest approach to the sun, researchers believe that Phaethon becomes so hot that rocks on the surface crack and crumble to dust under the extreme heat. Astronomers say this makes Phaethon a rock comet.

Astronomer David Jewitt of UCLA will present these findings tomorrow (September 10, 2013) at the European Planetary Science Congress (EPSC) in London. 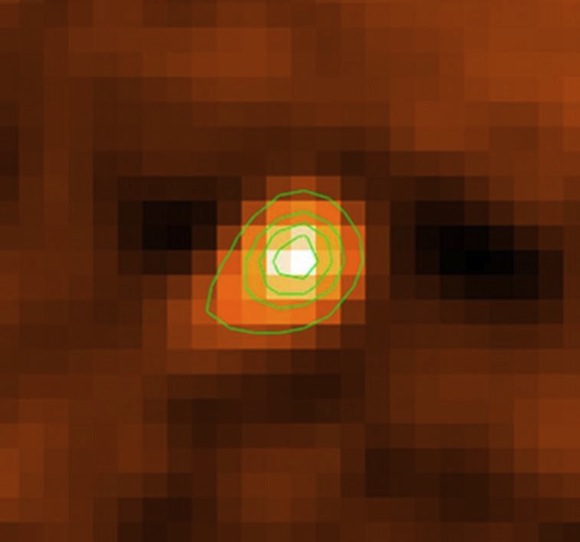 Zoomed, contoured image showing the south-eastward extension of the image of 3200 Phaethon. The extension is thought to be Phaethon’s comet-like tail. However, the tail is not formed of vaporized ice, as in an ordinary comet. Image via Jewitt, Li, Agarwal /NASA/STEREO

Most meteor showers arise when the Earth ploughs through streams of debris released from comets in the inner solar system. The Geminids, which grace the night sky annually in December, are one of the best known and most spectacular of the dozens of meteor showers. However, astronomers have known for 30 years that the Geminids are not caused by an ordinary comet but by a 5-kilometer-diameter object that, in many ways, always seemed more like an asteroid. Thus the object was given a name via asteroid nomenclature: 3200 Phaethon.

Until recently, though, and much to their puzzlement, astronomer’s attempts to catch Phaethon in the act of throwing out particles all ended in failure. The tide began to turn in 2010 when Jewitt and colleague, Jing Li, found Phaethon to be anomalously bright when closest to the sun. They credit their success with the use of NASA’s STEREO sun-observing spacecraft. Phaethon at perihelion appears only 8 degrees (16 solar diameters) from the sun, making observations with normal telescopes impossible. Now, in further STEREO observations from 2009 and 2012, Jewitt, Li and Jessica Agarwal have spotted a comet-like tail extending from Phaethon.

“The tail gives incontrovertible evidence that Phaethon ejects dust,” said Jewitt. “That still leaves the question: why? Comets do it because they contain ice that vaporizes in the heat of the sun, creating a wind that blows embedded dust particles from the nucleus. Phaethon’s closest approach to the sun is just 14 percent of the average Earth-Sun distance (1AU). That means that Phaethon will reach temperatures over 700 degrees Celsius — far too hot for ice to survive.”

The team believes that thermal fracture and desiccation fracture (formed like mud cracks in a dry lake bed) may be launching small dust particles that are then picked up by sunlight and pushed into the tail. While this is the first time that thermal disintegration has been found to play an important role in the solar system, astronomers have already detected unexpected amounts of hot dust around some nearby stars that might have been similarly-produced.

So, is Phaethon an asteroid or a comet? Asteroids and comets derive from entirely different regions of the solar system; asteroids from between Mars and Jupiter (roughly 2 to 3.5 AU) and comets from the frigid trans-Neptunian realms (30 AU and beyond).

“By the shape of its orbit, Phaethon is definitely an asteroid. But by ejecting dust it behaves like a rock comet,” said Jewitt.